Memories for a lifetime: kids in Antarctica 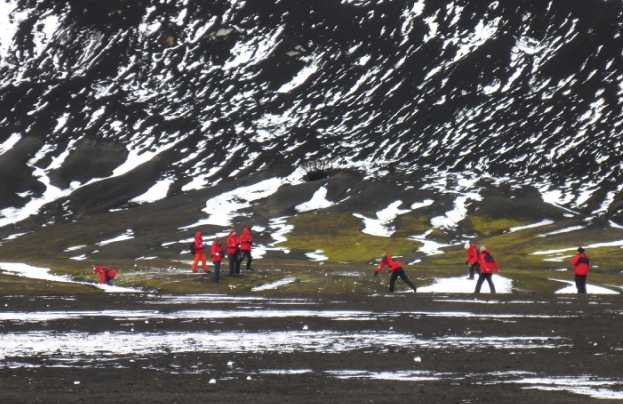 For a kid’s perspective our our Antarctica expedition, as well as a subsequent visit to Easter Island, we highly recommend Ciara Wing’s blog!

ABOARD LE BOREAL (Day 12) — What’s your favorite thing about this trip?

It’s impossible to choose as “every day we saw something new on this trip,” said Sergei, 17, from Moscow.

It’s two weeks since we boarded Le Boreal as strangers and now are crossing the Drake Passage back from Antarctica.

The kids have made fast friends, whether they are 10 or 15 or 17. They’ve also learned a lot more than they realized about birds, penguin species, whales, seals and likely each other, meeting kids from Australia, Russia and across the U.S. By the third day of the trip, they were already commandeering tables at the buffet for lunch, and when their parents permitted, dinner as well.

They didn’t miss the paucity of WiFi, it seemed, introducing each other to new card games, playing board games and just hanging out in the big lounge on Deck 3 after returning from adventures ashore or on sea days.

Each one has many memories but distinct favorites. “Sailing by an iceberg, it

“When the seal pup came up to me and I named him Squirmy,” said Sophie, 10, from Orange County, CA

“I named some of the “penguin highways,” (the paths penguins create for themselves in the snow) after streets at home,” offered Olivia, 10, from Melbourne, Australia.

“The penguins came right up to you,” said her brother Thomas, 12, adding that the Gentoo penguins were his favorite “because they are so cute.”

“I liked learning about whaling and seeing whale bones at the museum in Grytviken,” said Marcos, 12, from New Jersey. “And the gift shop was good!” It was in fact the only gift shop on shore after we left the Falkland Islands.

When the Young Explorer leaders took the kids day-by-day through the trip, the indelible memories came tumbling out—putting out a fire with the Falkland Islands firefighters; seeing tiny Rockhopper penguins in the Falklands; having a snowball fight in Antarctica and sliding down a hill; watching penguins steal stones from each other for their own stone nests, learning to drive a zodiac — part of the Young Explorer program — the pungent smell of the penguin colonies.

The only thing the kids didn’t like — besides getting chased in some cases by a Fur seal — was having to eat dinner in the formal dining room on a few nights as opposed to the casual buffet on deck six. The “fancy” French food got thumbs down; even worse, “It takes much too long,” several explained in unison, and portions were far too small to satisfy teenaged boys.

They are busy choosing their five best pictures for a photo exchange this afternoon.

That’s not going to be easy.