Memories of a hot air balloon adventure in Albuquerque NM 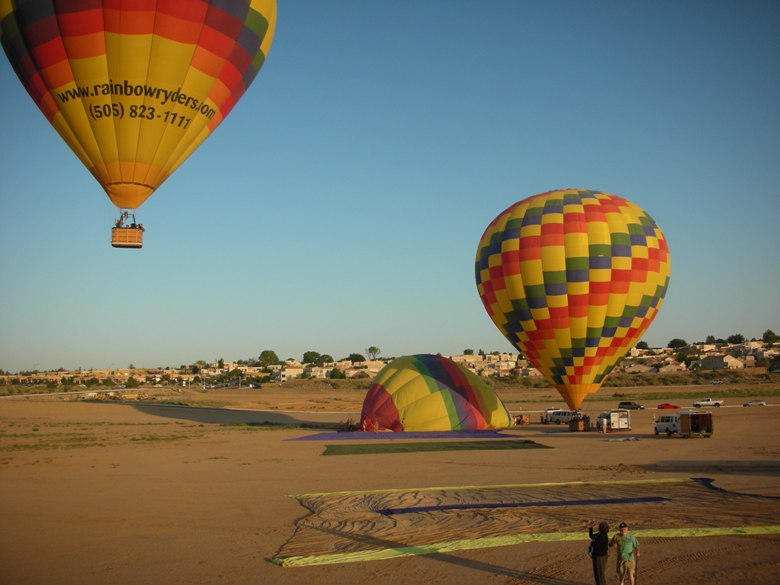 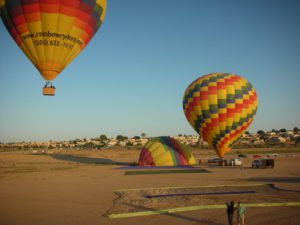 We floated over the Rio Grande and skirted the tops of green cottonwood trees with the Sandia Mountains in the distance while  kids pointed and waved at us. We waved back.

It’s never easy to get teens or college students up early, especially on vacation, but here they were all smiles before 7 a.m. — before anyone had had breakfast or even a cup of coffee.

And I wasn’t dreaming. We were floating high above Albuquerque, N.M., in a giant, rainbow-colored hot air balloon. We gave each other one of those I-can’t-believe-we’re-here grins that made every argument we’d had on our Southwest road trip fade away. Every vacation should have at least one standout moment like this.

Albuquerque prides itself on being one of the best places in the world for ballooning. The unique weather conditions here — the combination of the mountain formations and the river valley — enable balloon pilots to launch, move with the winds at different altitudes and even backtrack along their original course. Albuquerque has more than 300 local balloonists — more, officials say, than in any other state. Friends who live here tell us it’s not unusual to be startled early in the morning by balloonists sailing overhead or landing nearby. (The winds are most favorable just after sunrise and before sunset.)

The October International Balloon Fiesta welcomes some 700 balloonists and hundreds of thousands of spectators from around the world, including many families, at the largest such event in the world. Certainly there are lots of places to take the kids hot air ballooning — over the vineyards in Napa Valley, for example or the Red Rocks of Arizona, the Connecticut hills or in Africa where you can watch animals beneath you.  Google hot air balloons and you can take your pick. (typically over $200 a person, sometimes less for kids) We figured if we’re going to try this, it might as well be in Balloon Central with Rainbow Ryders.

(If you’re thinking about visiting New Mexico, check out the The Hyatt Regency Tamaya Resort  on 500-acre outside of Albuquerque, on Santa Ana Pueblo land.)

Rainbow Ryders took us to a field about 20 minutes away and we clamored out of the van, eager to help inflate the giant balloons — 120 feet high! Our pilot, Frank Gallegos, proudly told us that he has been ballooning for 38 years. His son, Joe, a University of New Mexico student, is part of the crew. “I first took him up when he was just two days old,” Gallegos said. Balloons, he said, operate though the principal of gravity. As air inside the balloon is heated, it rises. When the air is cooled, the balloon descends. To inflate the balloon, the crew uses a giant fan, and then heats the air with a burner.

Our hour-long ride above Albuquerque would require nearly 50 pounds of propane and the balloon, which is 210,000 cubic feet when fully inflated, is capable of pulling a ton, a weight that includes the heavy basket and nine eager passengers.

As soon as the balloon and large wicker basket were upright, we quickly climbed inside. Gallegos gave the balloon some hot air (propane) and before we knew it, we were floating high above the awakening city.

“I really liked being over the river,” reported 11-year-old Claire Fishman, who was in another balloon with her family. But her younger brother Jeffrey, 7, wasn’t as enthusiastic. Frightened by the height, he spent most of the time sitting in the bottom of the basket, his mom, Dr. Abby Huang, said. But he did pop up periodically to wave at the school kids.

We felt like voyeurs as we peeked into back yards. Over the desert, we saw jackrabbits and even a coyote. The backdrop of the city and the view of the mountains made the scene postcard-perfect.

Imagine what the French peasants must have thought in 1783 when they saw the first hot air balloon over Versailles — it was flown as a demonstration for King Louis XVI and Marie Antoinette. A sheep, a duck and a rooster were onboard.

It’s still a great way to travel, drifting over the trees, the houses looking like Monopoly pieces. It’s over too soon. After we landed, we helped the crew stuff the rapidly deflating balloon into a huge sack and then it was time for one last balloon tradition — champagne to celebrate a successful flight.

Definitely worth waking up for, my girls said.

Now if we could just find some coffee.