Memories of misadventures on a family ski trip 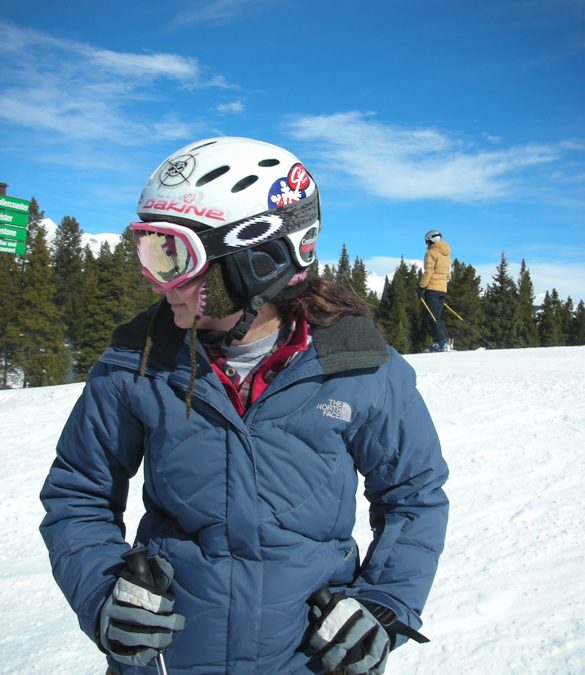 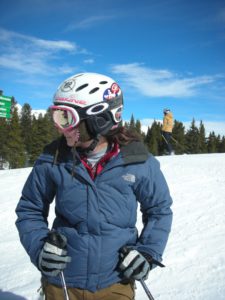 Mel sat on top of her duffel, arms crossed, glaring at me. I glared right back.

We were supposed to leave for the airport 10 minutes ago and were at an impasse. My young teen had decided to take a ripped camp duffel (mended with duct tape, she pointed out) on our weeklong trip to Colorado ski country, cramming everything – ski boots, helmet and clothes – into one too-heavy bag.

“It’s so much easier,” she explained. I didn’t think so, urging her to take something on wheels. No dice. Too uncool, I guess.

“I can carry this easily,” she declared. YOU don’t have to worry about it!”

“Hope you two don’t kill each other before the week’s out,” my husband said. He was staying home.

Whenever kids are part of the equation—whether they’re four, fourteen or 24—let go of all your expectations for that perfect family bonding experience. It won’t happen. You’ll be lucky if you get a few of those can’t-believe-we’re-here-together moments. And if your kids are like mine, they won’t want to stop then  to take a picture.

Ski trips, it seems, are among the most labor intensive, not to mention expensive, for families. January, though, is National Learn a Snow Sport Month with more than 200 resorts offering free or discounted ski, snowboard, and cross-country ski and snowshoe lessons for beginners (www.skiandsnowboardmonth.org). (For  more on what ski resorts are offering families this winter, visit the featured destination section of ttk-old.o2dev.net)

On that ski trip, Melanie (now a college sophomore) won the suitcase battle, of course, and I think that was before airlines were so vigilant about overweight bags. She slept all the way to Denver and then urged me, in her most patronizing voice, to “chill” when I became frustrated as we got lost leaving Denver International Airport, paying $5 in tolls as a result.

The rest of the trip certainly wasn’t the perfect mom-daughter bonding experience I’d hoped for either. When we checked into the lodge at Vail, Mel begged off having dinner with me. “Too tired,” she said, huddling under the blankets.

The next day, I convinced her to join a teen ski class. I told her that the resort was making a great effort to offer special programs on the mountain designed for teens. Hopefully, other parents got a more positive report at the end of the day. “The kids were so annoying!” she complained. “We spent so much time waiting around! I won’t go back!”

Suit yourself, I said. But then I worried what she’d do the following day if she wouldn’t go to ski school. I had already made plans for a lesson of my own.

The next day, I left Mel sleeping. When I returned before lunch, she was horribly sick. “I tried to call you three times!” she said. I felt like the most awful mother in the world.

To make it worse, she was so sick that we couldn’t leave as scheduled to head on to Aspen. The hotel was overbooked, and I had to beg for them to find us a room for the night.

That night, I hurriedly ate a solitary meal in the hotel while Melanie slept, this time wistfully eyeing the

happy families around me.

By the next day, she’d recovered sufficiently to make the 90-minute drive to Aspen, where we were to spend the rest of the week, meeting up with her older sister and friends who were at college in Colorado.

I’d reserved a condo and Mel was suddenly a happy camper, settling in on the big living-room couch. Even with just two of us, I realized how important space can be for a vacationing family.

I’d scheduled Mel for another teen class—this time one that that would focus on doing tricks on skis– and held my breath to see if she’d go. I lucked out. Not only did the other kids fail to show, meaning a private lesson for Mel, but she also had a terrific time. “So Cool!” she announced. “Thanks, Mom!”

I reminded myself to be grateful for happy vacation moments no matter how few.  She was even happier when her sister Reggie and Reggie’s roommate, Meghan McCloskey, arrived for the weekend. (No more just mom!)

I tried not to feel hurt. I’d planned for us to hit one of the many hip Aspen restaurants but the girls begged off, too tired, they said, happy to eat pizza in the condo and watch a movie.

The next morning we got lost in a snowstorm trying to navigate our way to Snowmass, the largest of Aspen’s four mountains and the one considered family central.

Relax and hang in there, I told myself. Everything will work out. And it did. Mel and her sister had a fine day exploring the steeps and deeps (and the fresh powder), while Meghan, new to skiing, took a lesson and I toured the mountain with a local.

We didn’t reconnect until late in the afternoon.

That wasn’t a bad thing, either, I thought, as everyone jabbered on about their adventures.

They were game to go out to dinner, so we headed out for pasta.

The next morning, we were at Aspen Mountain at 8 a.m., skiing “first tracks” down the mountain.

The sun was shining. Everyone was smiling for once.