Memories of Monet’s Garden: where a little girl led the way 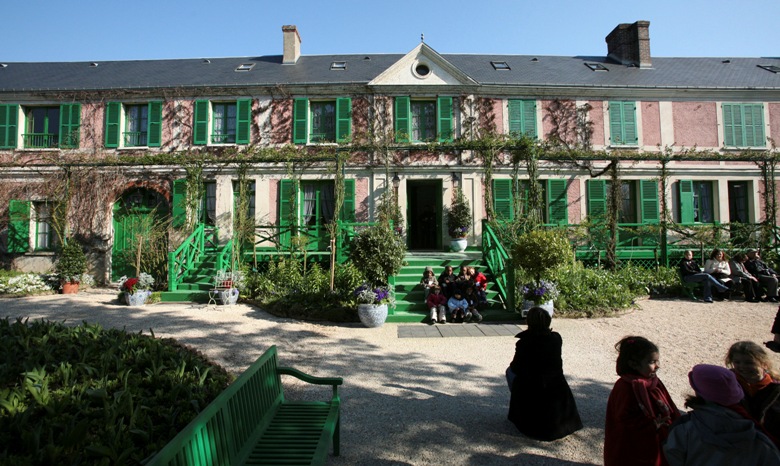 I’m walking in Monet’s famous gardens at Giverny on a sunny day, gardens with nearly 100,000 plants and a riot of colorful flowers, not to mention the famous lily pads immortalized in Monet’s work. But I admit I’m not really thinking about what I’m seeing, or the masterpieces Claude Monet created here outside his home just 44 miles from Paris.

I’m thinking about a little American girl skipping over the famous green Japanese Bridges and through the gardens with a big smile on her face.

That was my youngest daughter Melanie, 7 at the time, who was enamored of the book “Linnea in Monet’s Garden,” by Cristina Bjork, which is still very popular and tells the story of a little girl who on a visit to Paris, sees Monet’s famous paintings and then visits his garden in Giverny, learning about art and Impressionism in the process.

From the time we told Melanie we were going to France that summer, she insisted we must visit Monet’s Garden. It wasn’t that far-fetched an idea; Monet’ House and Garden , only open April through October, is a top tourist attraction, drawing 500,000 visitors a year and easy to reach from Paris by train.

A visit here can help kids and their parents better appreciate the creative process, especially after they’ve seen some of Monet’s masterpieces in Paris museums, like the wonderful Musee de L’Orangerie in the Tuileries Gardens with its curved rooms designed by Monet himself to showcase his huge water lilies painted at Giverny. In fact, Monet loved the light in the Seine Valley and painted 48 canvases of the lilies and 44 of the bridge, including paintings of his children and stepchildren in the gardens.

(A tip: Buy tickets in advance, or if you plan to see a lot of Paris’ top museums, invest in the Paris Pass, which will enable you to skip the lines here and at other top attractions and museums.)

But at the time, I thought I was being very forward-thinking to allow a 7 year old to plan a day of our trip, especially when no one else in the family, including her older sister and a friend accompanying us, was very enthusiastic. Today, of course, many parents say kids influence their vacation decisions and they go to great pains to make sure everyone has a say in the itinerary.

So we took the train from Paris and brought sketchbooks and pencils, thinking the girls would have fun drawing in the garden. I didn’t count on the crowds.

Mel didn’t mind the crowds in the garden or Monet’s house where he lived with his big, blended family (eight kids) and she was very pleased with herself that she had brought us there. I saw that day the power of travel for a child — to see something real that they’d only seen in a book, to have the “grown-ups” and older siblings follow their lead.

This time we had returned to Giverny in the fall with some cousins, the first stop on an Avalon Waterways cruise from Paris to Normandy. It wasn’t terribly crowded and we could have sketched in the garden.

I tried to imagine what it must have been like when the house was filled with noisy kids — Monet’s two sons and his six stepchildren, the children of Alice Hoschede, who Monet married after his first wife died. Our guide told us Monet fell in love with the house from the train — the pink brick, the green shutters, the orchard. At first, in 1883, he could only afford to rent the place. As he became more successful, he bought the house, added on to it to accommodate the family and transformed the orchard into the gardens, planting hundreds of plants, thousands of seeds and creating the lily pond.

At first, our guide, Christine Brouillet, tells us the locals were not happy when Monet diverted a tiny river estuary to build his pond, but in the end, as the garden bloomed and Monet’s fame grew, they appreciated what he’d done.

Young American painters came to learn from Monet but he didn’t want to teach them. They set up camp anyway, staying in a grocery turned hotel in the quaint village, Hotel Baudy, holding raucous parties often attended by the Monet children. Stop for lunch there!

Giverny and the entire Seine Valley were essential in the history of the Impressionist movement, of course. We stand in the room that was his studio. Later he would build two other studios, including one large enough for the huge water lilies paintings.

Monet’s house has been carefully restored — thanks to millions donated by Americans — the kitchen with its blue tiles, the yellow dining room and, just this year, Monet’s bedroom on the second floor. There are photographs displayed along with reproductions of his works on the walls.

The best, of course, is the garden where 10 gardeners work, planting some 100,000 plants annually — roses, tulips, iris and azaleas. There were still flowers in bloom when we visited at the end of October — just no smiling little girls skipping over the bridge.

Some day, I think, I’ll return with Melanie’s children and tell them that story, letting them show me the way.