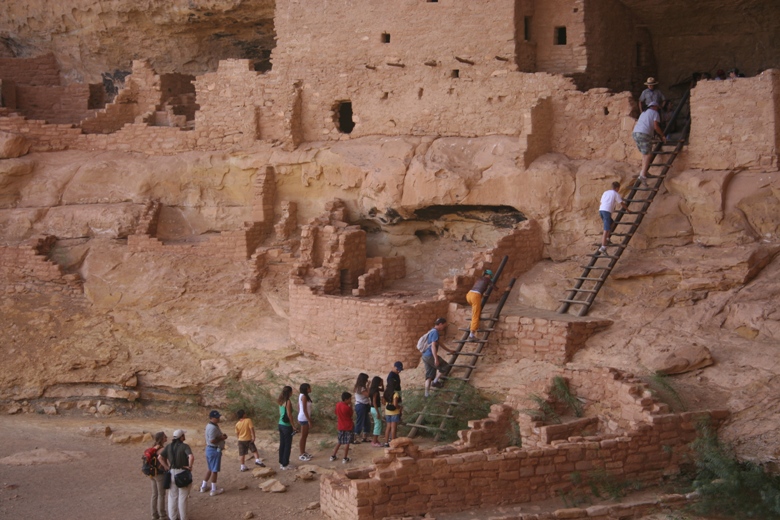 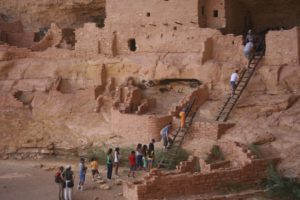 There’s no time to be nervous. The kids charge ahead up the 32-foot ladder, squeezing through a narrow, 12-foot tunnel, walking in toeholds carved into dusty sandstone.

Imagine if you could only get into your office or house via toeholds carved into rock. Imagine cooking by tossing a hot rock into a waterproofed basket filled with stew fixings and grinding corn with a rock. Imagine living with your family in small stone rooms. Imagine no TV or video games to entertain the kids — just stories passed down from generation to generation.

We’re all trying to get our heads around what family life must have been like for the Ancient Puebloan families who lived in these amazing cliff dwellings in southwest Colorado’s Mesa Verde National Park (www.nps.gov), the nation’s largest archeological preserve offering some 4,000 known archeological sites, including 600 cliff dwellings.

Who says ancient history is boring? Our gang, which includes kids from kindergartners to college sophomores and grandparents, is fascinated to learn that this ancient culture continues today through modern-day Pueblo nations who return here several times a year for special ceremonies.

Local ranchers first discovered these cliff dwellings in the late 1800s and Mesa Verde National Park was created in 1906 to preserve them. The Ancient Puebloans made this place home from about 550 AD to 1300 AD when they abandoned the area, archeologists believe, after years of drought and because the land that had supported them for so long could no longer sustain enough crops for their growing numbers. The dwellings are spectacularly well preserved.

Sadly, most of the 400,000 tourists who visit don’t spend enough time here to really appreciate all this park has to offer — a hands-on introduction to this ancient culture, hiking a petroglyph trail, the chance to teach kids about modern Native American life nearby and a first-rate restaurant, the Metate Room, where ingredients the ancient Puebloans used, like beans, squash, corn and wild game, are given a decidedly modern and delicious twist (www.visitmesaverde.com).

We’d been exploring southwestern Colorado in an RV (www.gorving.com) when we pulled into the Morefield Campground here — our favorite yet — where my two young cousins, 5-year-old Hannah Sitzman and her 7-year-old brother, Ethan, were out playing baseball within five minutes of our arrival with some of our “neighbors,” who were visiting from Massachusetts.

They stop in their tracks when they see a mama deer and her fawn race by into the woods. Incidentally, you can arrange for a campsite with a steel-framed tent and cots so you can have the camping experience without lugging all the gear. Rangers offer evening programs at the campground, as well as at Far View Lodge where some of our gang is happily ensconced in rooms designed to highlight Native American culture.

We’re inadvertently a trendy group, I discover. Camping and RV vacations are growing in popularity. Aramark Parks and Destinations (www.aramarkparksanddestinations.com/), the concessionaire at this park, reports that bookings here at Morefield Campground are up 22 percent this year, as are multigenerational trips everywhere, according to the newly released YPartnership/Harrison Group survey entitled “2010 Portrait of American Travelers.” Twenty percent of today’s family travelers are grandparents and two-thirds say they took at least one vacation with their grandchildren last year.

Anyone who has ever tried to arrange a multi-generation trip knows it isn’t always easy to satisfy everyone at the same time, but I’m pleased that Mesa Verde does the job. The Park Service has partnered with Aramark and the nonprofit Mesa Verde Institute (www.mesaverdeinstitute.org) for a range of programs to suit all ages and physical abilities from ranger-guided tours of the cliff dwellings (you must purchase $3 tickets) bus tours, rigorous ranger-led hiking tours and even a twilight hike to Cliff Palace, the park’s most famous cliff dwelling where historic characters in costume give their own perspective of Mesa Verde.

Because there are 14 of us, we’ve arranged for a private tour with retired National Park Service veteran Alan Whalon who takes us to two of the cliff dwellings that kids like to most explore the most — Balcony House and Long House — because there are ladders to climb, toeholds to try and the opportunity to “grind” corn and peer into the ancient ceremonial Kivas. “We’re on an adventure!” declares Hannah Sitzman, as she holds Whalon’s hand.

There are also plenty of self-guided activities. You can drive the Wetherill Mesa Road or hike the Badger House Community Trail, which will take you through four mesa top sites. You can see Spruce Tree House (130 tiny rooms!) or tour the Chapin Mesa Museum, which depicts ancestral Puebloan life.

National Parks Service educational specialist Sandy Groves is working hard to make the park even more interesting for families with a newly designed Junior Ranger booklet that introduces a girl named Gentle Rain who lived here with her family 750 years ago. You can borrow a discovery pack complete with kids’ field guide, binoculars and hand lens and those kids staying in the campground can become Junior Naturalists. (Stop and listen, the kids are encouraged. Close your eyes. What do you hear? What do you think you would have heard 800 years ago?) Look for more children’s activities next year, suggests Aramark spokesman Judi Swain.

Groves’ Tip: Allow yourselves enough time. It can take an hour just to get from the park entrance to the visitor’s center.

It’s hot and no food is permitted in the cliff dwellings but amazingly, none of the kids complain. They are too interested in traveling back in time and imagining what their lives would have been like all those centuries ago. (No school! Parents by the time they are young teens! Building houses from mud and stone!)

We finish our day with dinner in the award-winning Metate Room where the kids chow down on mac and cheese and chicken fingers, while I eat one of the best meals I’ve ever had in a national park — prickly pear shrimp, red chile polenta and cinnamon chile pork tenderloin.

I try to imagine special family dinners all those centuries ago. I bet the kids didn’t  want to sit still with the relatives then either.

We toast to a successful vacation day — that rare occasion when everyone is still smiling at dinner.

For more on Eileen’s trip to Mesa Verde, read her Travel Diaries