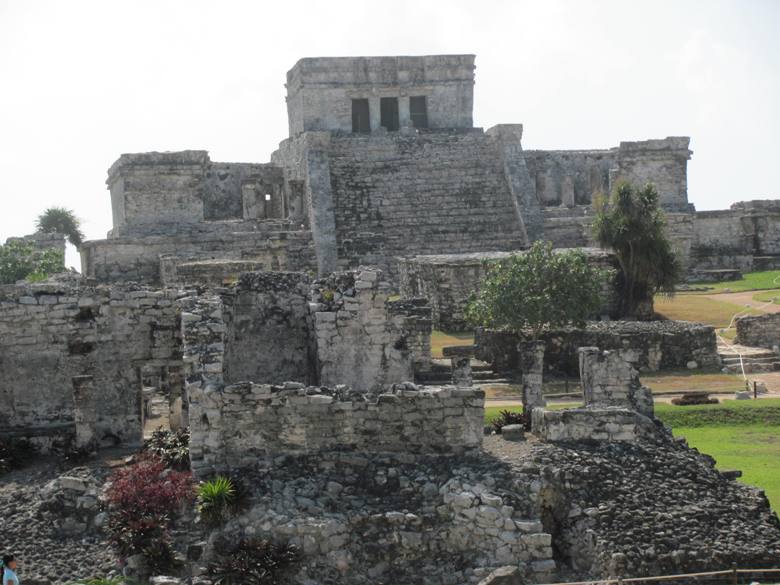 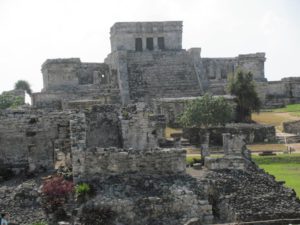 The next time the kids don’t want to do their homework, remind them that knowledge is power.

That’s what the ancient Mayans believed. Those with the most knowledge — astronomers, priests, doctors — lived closest to the temples. We learned this, and more, when we visited the ancient city of Tulum, a spectacular, oceanfront ruin located along the Mexican coast, 75 miles south of Cancun (www.rivieramaya.com). Tulum is one of the last cities inhabited and built by the Mayans.

I’d be remiss if I didn’t mention we’re less than a year away from Dec. 21, 2012, the date the ancient Mayan Long Count calendar forecasts will signal the end of all humanity. But experts aren’t convinced and I’m not worried.

Though safety is a major concern for tourists traveling to Mexico, here on the Yucatan Peninsula — a glorious stretch of Caribbean, which runs more than 80 miles along the coast, starting just 10 miles south of Cancun and including the seaside village of Puerto Morelos, Playa del Carmen, Akumal and Tulum, as well as the amazing Sian Ka’an Biosphere Reserve, no one I met was worried. They were too busy enjoying that perfect combination of beach, watersports (snorkel in the largest natural aquarium in the world at Xel-Ha Park), foreign culture (great place for the kids to practice their Spanish), food, and, of course, time-traveling back to an ancient culture. This area, after all, is more than 1,000 miles from the region specified in the U.S. State Department’s warning about travel to Mexico.

Even better, you may get a bargain. You have your choice of more than 300 hotels from tiny 15-room beachfront hotels like the Playa Azul in Tulum to massive all-inclusives like those from Barcelo and Iberostar to small upscale condos like the Condo Hotels right in the heart of Playa del Carmen with its pedestrian Fifth Avenue that teens especially will love. (Book three nights or more and get 15 percent off, plus breakfast. Book seven nights and get an additional 10 percent off.) Let’s not forget manicured resorts like the Fairmont Mayakoba, which has taken the lead in sustainable tourism and makes efforts to incorporate local culture in all of its programs, even the spa, which features local herbs, oils and extracts and treatments, including Mayan clay purification. Resort shops feature local Mayan handicrafts. (Check out Fairmont Savers rates that can save you 30 percent off the best rates.)

Many people think your only options here are big all-inclusive resorts. Actually, 75 percent of hotels here have fewer than 100 rooms. (We loved the 88-room, all-inclusive Ceiba del Mar Beach and Spa Resort, just south of Cancun.) Another small all-inclusive, the 148-room Azul Beach Hotel, is ideal for young families with its gourmet baby food, Fisher-Price toy loaner program, kids club and beachfront playground. (Book from May 1 to Dec. 22 and kids 13 and under stay free here and at the larger Azul Sensatori Hotel by Karisma and adults are 20 percent off.)

Wherever you stay, you should get out and explore.  Tulum — at its height between the 13th and 15th centuries — is one of the best preserved Maya sites and the high cliffs surrounding this coastal town protected it from hurricanes even in ancient time.

It is a great ruin to visit with the kids because it is relatively small and when you are finished, you can walk down to the beach and cool off in the water.

Our guide, Gabriel Morales, explains that perhaps only 800 people — those with the most knowledge — lived within the city while thousands more lived outside. (Note: It is smart to get a guide at the entrance. It’s less than $50 for four people.)

Time travel on a beach vacation? That’s not all. Swim in an underground cenote (deep water-filled sinkholes). These underground river systems crisscross this region. You can even explore a cave. Yes, we did that too at Rio Secreto and it might be one of the most unique experiences I’ve ever had, though I wouldn’t bring kids younger than six.

Our guide, Alfredo Kuri Ogalde, led us as we sloshed through water, squeezed through narrow openings and floated along taking care not to touch any of the amazing formations. The only light is from the light on our helmets.

What makes this cave so unique is that it’s the only discovered cave not completely flooded. The formations — orange, sparkling crystal, calcium blue gray — are also so fantastic — there are thousands of stalagtites overhead; big ones, small ones — because the petrified coral reef is more porous, allowing the formations to grow more quickly.

Mayan warriors had to find their way through the cave before going off to war. The theory was that if they confronted the nine gods of death and survived, maybe they could cheat death again in battle.

The Mayans believed that when they died, their souls had to pass through the underworld to be reborn … as we will be when we return to the surface, we’re told.

I don’t know if we’ve been reborn. But when we get back outside, everything seems much brighter — and different somehow.