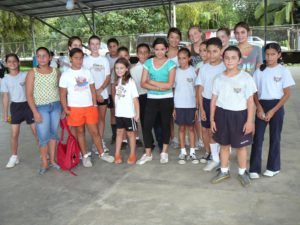 Visiting with schoolkids in Costa Rica

After a morning white water rafting on the Sarapiqui River (five miles of river, 20-class two and three rapids!) and a burrito lunch at the river’s edge (“the best burritos!” The kids declare) we stop in the town of Horquetas, about 10 minutes from the hotel to visit an elementary school. The kids have made cards for the group of girls who will be our hosts and have stickers to hand out to the younger ones. Some 270 kids go to school here-so many that they go split sessions. They mug for our cameras and giggle.

We parents of course notice what their schools are missing-computers, air conditioning, enough room for the children to go to school full days. Sarah Kate Garrett, at nine the youngest in our group, immediately makes friends with nine-year-old Maria. The older girls are more stand offish — the Costa Ricans as well as the Americans — as Shirley, our guide, tries to serve as translator, asking the kids what they do for fun (listen to music, hang out with friends) what sports they play (soccer) what they like to eat (ceviche, the Costa Rican kids said, pasta replied our girls.)

But all shyness evaporated on the soccer field where some 18 kids of all ages — the eight in our group and 10 from the school divided up on teams. Other local kids from the school came to watch. There were no shin guards or nets in the goal posts. They played on a cement field. But they laughed and ran and kicked the ball as if a championship depended on it.

“Sometimes it is a little awkward to bring kids together like this from different cultures,” says our guide Gaston Trujillo, a veteran of such meetings that are a hallmark of Thomson Family Adventure trips. (The kids had the opportunity to become pen pals with the local youngsters but only two had done that.) “But the awkwardness is part of the experience. This is a very safe place for them to interact and it’s good to push all of them out of their comfort zone. It’s very good for all them to see that kids are just kids no matter where they come from.”

“At the end of the day,” he continues,” some will get along like they have been friends for years. And all of them will realize that there are many things that connect them that are stronger than language.” Soccer really works because it’s the local sport here and American kids play it too.”

In fact, our four young hostesses returned with us to the hotel where we all went on horseback through the rain forest (we could hear howler monkeys! We could see macaws in the trees!) to a natural river pool complete with water slide and waterfall that the hotel’s owners had developed. The girls whooped and jumped in the water, sliding down the water slide like a giant gum chain. It didn’t matter if they spoke English or Spanish, if they were from upscale suburbs in the United States or small Costa Rican villages. Fun was the universal language.

“It’s fun to meet new people and the little kids were so cute,” said Emily Wolfram, who is going into seventh grade.

“It’s good for them to see that the children do the same things at school (They have a better snack bar!) said Emily’s mom Patti Zebrowski. She added that a trip like this — a group trip — might be more expensive than traveling solo, but it’s much less stressful, especially for a mom traveling alone with a 12-year-old. “And you do so much more than you would on your own.”

In fact we started our day rafting, ate a spectacular lunch prepared for us by the river guides at the water’s edge, visited a school, went horseback riding and then swimming in a pool surrounded by rain forest that seemed a little bit of paradise (especially to water-slide loving kids!)

Cathy Purnell , traveling with her husband and three daughters aged 11 to 16- was especially glad for the opportunity to visit the school. It’s important, she said, for the kids to see how schools here are different (Not a computer in sight!) Her only regret: That we hadn’t brought new soccer equipment with us.
Next time.