Monticello is super kid-friendly, just like Thomas Jefferson was 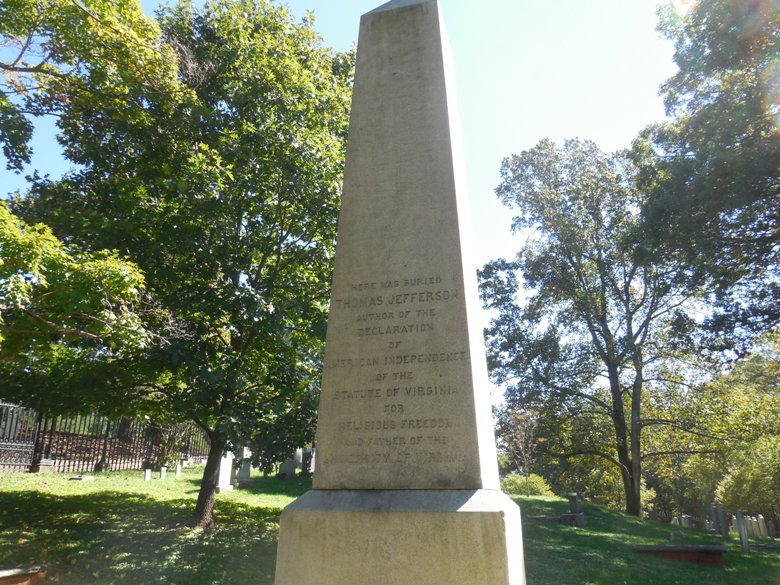 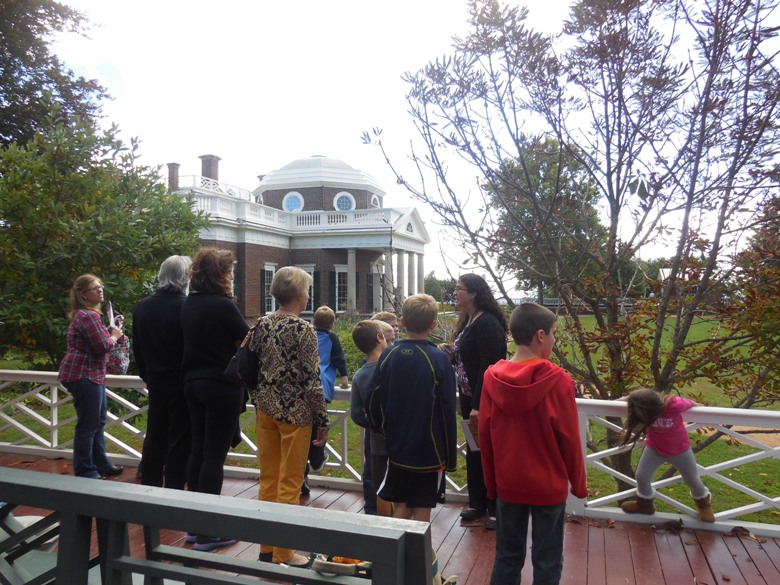 CHARLOTTESVILLE, VA — Think you can build your own Monticello?

We’re in the Griffin Discovery Room at the Monticello Visitor Center where some young boys make a beeline for the table of blocks where they can build their own dream house—just as Thomas Jefferson did.

They can lie down on a replica of his alcove bed (it seems so small!), try a polygraph machine, which Jefferson invented to make a duplicate of whatever letter he was writing (when you realize he wrote 19,000 letters in his lifetime, it’s easy to see why he needed it. Kids love the cipher wheel – like another Jefferson invention for secret messages. 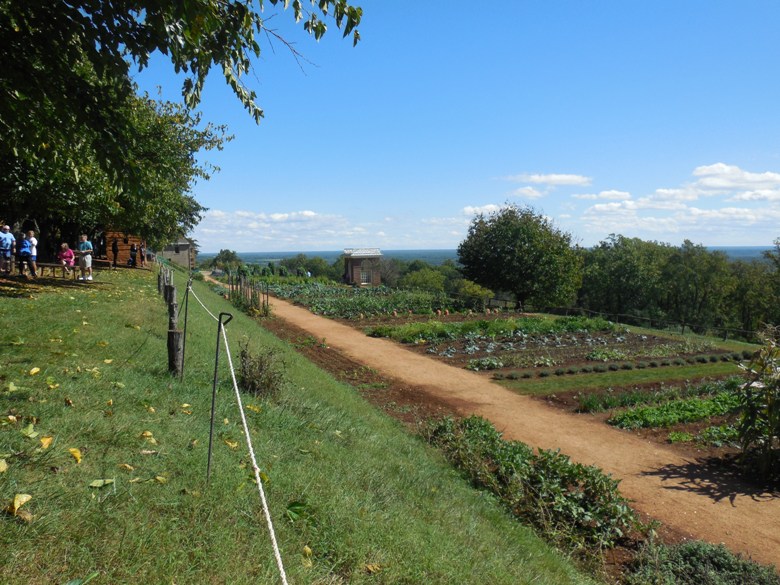 But the youngest visitors especially love the recreation of the slave quarters, said Rachel Baum, manager of children’s programs at the Visitors Center. They “cook” with plastic vegetables and over a glowing “fire.”

They also love the “Travelin’TJ” picture they can color in and take on their next adventure, sharing the photo by sending it to education@monticello.org, Taging it “Monticello for Teachers” on Facebook or @TeachMonticello on Twitter #TJMonticello. (To see where else Travelin’ TJ has been, visit him online at Monticello.org/travelintj. What do you think Jefferson would have made of social media and technology?

Outside Jefferson’s home on this 5,000 acre mountain estate (Monticello means “little mountain” in Italian), there is another Mountaintop Activity Center where kids can try writing with a quill pen, play a colonial game use an Orrery model that shows the movement of the earth in the solar system or look through the camera obscura, a device that you look through and see inverted images. It was used in Jefferson’s time to make silhouettes — as popular as we use photographs. 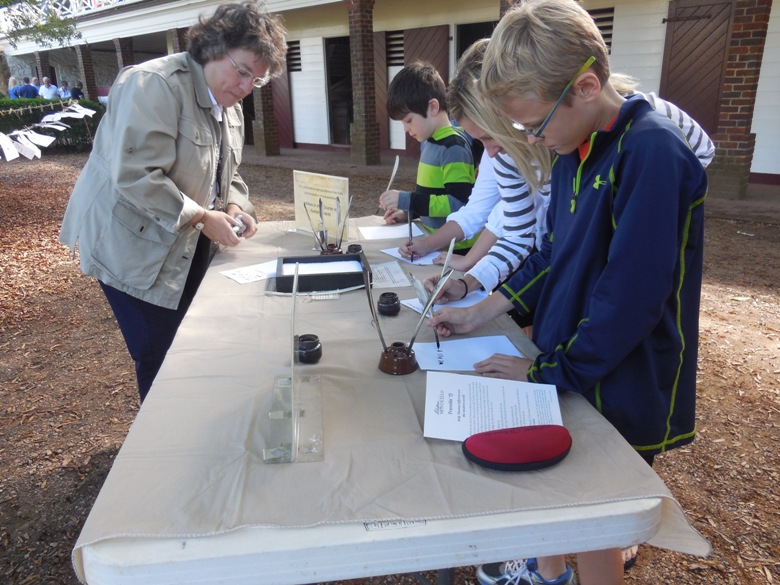 It is only fitting that the home of our third President and the man who wrote the Declaration of Independence is so kid friendly. Jefferson was very fond of his 12 grandchildren, many of whom lived here with him after his retirement.

He had two surviving daughters with his wife Martha Jefferson and is believed to have fathered six children, four of whom survived to adulthood, with his slave Sally Hemings, who also was his wife’s half sister.

Confusing? Absolutely! But so was Jefferson’s conviction of liberty from Britain for the colonists but not for slaves.

There is so much for kids to learn here — the huge garden where Jefferson famously brought vegetables and fruits from around the world — he grew 30 different kinds of peas; Mulberry Row that was home to 100 slaves, including children (by age 10 they were working full time);  the way children learned in those days; archeology; the way food was prepared. Jefferson loved good meals so much he had his slave James Heming trained as a French Chef in Paris when he was serving there.

“Who knows who Thomas Jefferson was?” the guide Jessica Eustace asks the group of kids on the family tour.

“He wrote the Declaration of Independence!” one boy says

“He was the third president!” says another.

“He was a nice man,” says 5 year old Hannah, who adds that “I really don’t know anything about Jefferson.”

“Do you collect anything”? Aurelia asks the kids as she gestured around the huge hall showing off Jefferson’s collections—everything from Mastadon bones to Native American feathers, maps and the Great Clock that displays the time as well as they of the week.

The guide handed out something for each to hold that would have meaning.

— a plush canoe (from Lewis and Clark expedition during Jefferson’s presidency: We see the artifacts — , Indian arrows, even fossils

— plush buffalo – there is a gorgeous painting on a buffalo skin.

— octagon mirror – Jefferson loved octagon and made his retreat Poplar Forest an octagon. There is also an octagon room here.

— The $2 bill –the same painting depicted on it is hanging on the wall.

— Dolls in colonial garb—Thomas and his much loved wife Martha.

On the special family tour we take, I’m grateful for our excellent guide.

“This is a house full of kids,” she says, gesturing in the South Square Room where Jefferson’s daughters and grandkids might have had their lessons.

She shows them how when writing with a quill pen, you have no recourse but to scratch out if you make a mistake — just as Jefferson did on the Declaration of Independence.

Jefferson loved to read, she says, showing us the Book Room where he kept his immense library of 6,700 books. Some are so tiny! And after the British burned the US Capitol during the War of 1812, Jefferson sold the government his library to pay down his personal depts.—the books became the basis for today’s library of Congress. 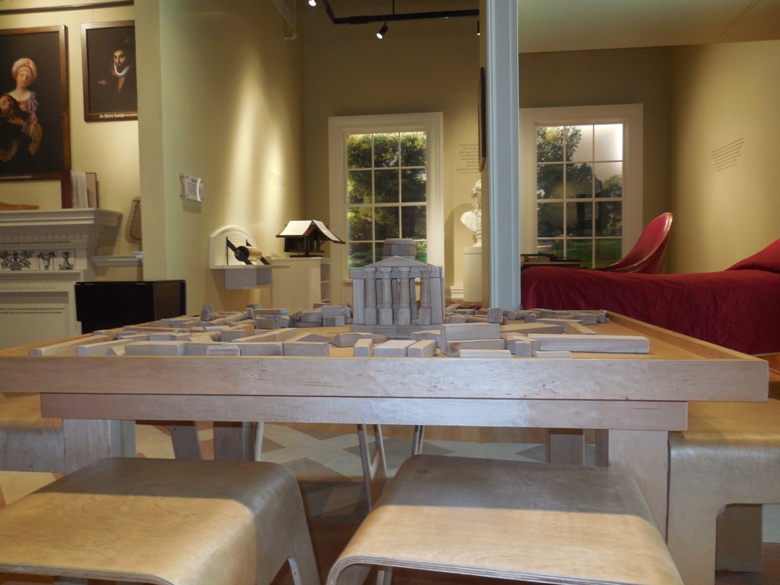 Jefferson couldn’t “live without books” he famously said in a letter to John Adams and immediately bought more (he died heavily indebted, leaving his heirs no choice but to sell Monticello).

We see Jefferson’s study and bedchamber where he spent working. He died in this room on July 4, 1826 — exactly 50 years after Congress approved the Declaration of Independence and the same day his fellow founding father John Adams died in Massachusetts. A pair of his riding boots is in the corner. He loved riding his horses.

We see the Parlor where Jefferson’s family gathered to play games and musical instruments and the Dining Room, the tables arranged according to the number of people who were there. Later we see the kitchens and smoke rooms underneath the house.

The kids seem as interested as the adults, especially when the conversation turns to kids—Those who are 10 learn that if they had been slave children, they would have been working full time by then, the boys making nails all day long, from sun up to sun down; the girls might have been weaving cloth. “I didn’t think I would like that,” said 10 year old Andrew Carrier.

“My son loves history,” said Allison Gallup, “But that my five year old daughter is still engaged and entertained is very unusual.”

For families — and others — who want to learn more, there are special garden and slavery tours as well as special seasonal offerings (make gingerbread Monticellos or come to a Heritage Harvest Festival!)

Some of the visitors were here for a University of Virginia football game—Jefferson, we learn, was the founder of the University. It seemed most everyone staying at the 200 South Street Inn downtown where we were staying were going to the game.

We loved the pedestrian-only downtown mall, chock a block with interesting shops, restaurant and music venues. Down the road from Monticello is the Michie Tavern, which accommodated travelers with food, drink and lodging more than 200 years ago. Today, visitors e come for an 18th Century tavern experience complete with food like fried chicken and biscuits.

I was glad we did have time for the Saturday morning farmer’s market across the street from the inn where we were staying—gorgeous tomatoes, eggplants and greens; cheeses and honey, apples and pears, freshly baked pies and pastries, just picked bright flowers

That night, at the wedding we attended the bride noted the flowers all came from the farmers market that morning.d