Mythology Made Easy in Athens 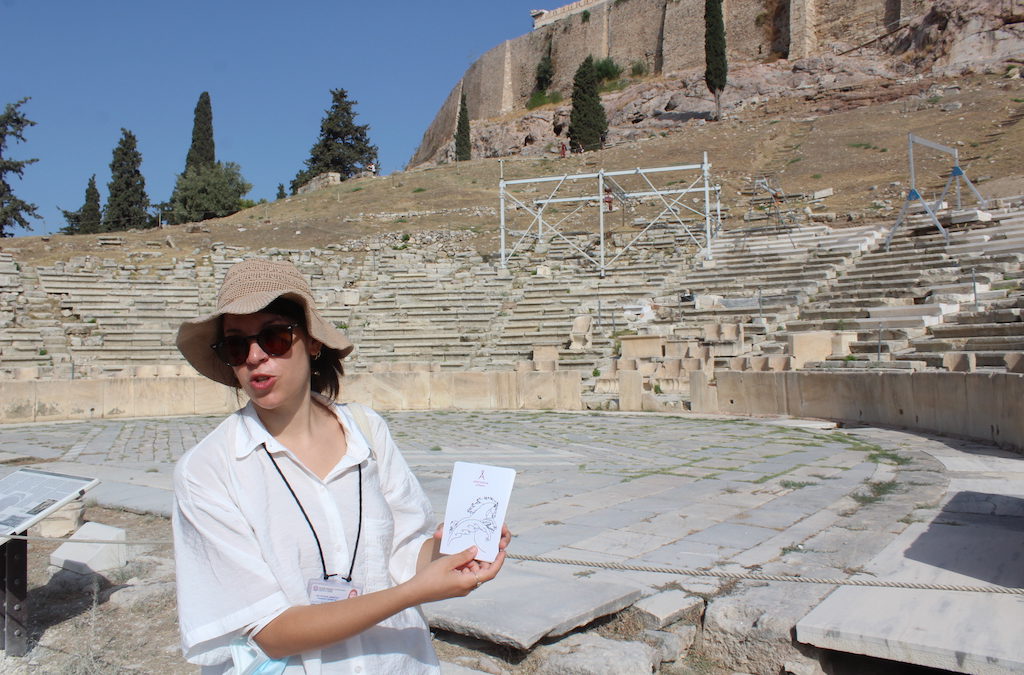 ATHENS, Greece — Have you ever had to share a room with a sibling?

Or a college roommate you don’t know, or don’t like very much. It’s not always easy.

Imagine if you are a competitive Greek god or goddess of ancient mythology with a big ego, not to mention you’re immortal with many superpowers.

That was the case for Poseidon, the god of the sea, and Athena, the goddess of war strategy and wisdom.

They both vied to put Athens under their protection.  Athena already had her nose out of joint because Poseidon had fallen in love with one of her priestesses and kissed her inside their shared temple—a decided no-no. She punished Medusa by making her ugly with snake hair, but she couldn’t do anything about her sibling Poseidon.

The King of Athens knew he couldn’t choose one (gods could be very vengeful when disappointed), so he suggested a contest. Whoever gave the best gift would win. Athena grew an olive tree, the first in Athens.

“You know how Greeks love olive and olive oil,” explained our engaging guide Demetra Ignatiou as we stand in front of the Erechtheion, perhaps the most distinctive of Greece’s ancient temples and one of three at the Acropolis (which means edge of the city).

Poseidon offered a spring, but of salt water. The men voted for Poseidon; the women for Athena (in those ancient days women could vote, though that was quickly taken from them after Athena narrowly won this vote). Ultimately, the king built the temple to show equal respect for both gods, with each one having their own room and entrance. “It symbolizes both elements of Athens,” Ignatiou explained, “the sea and the earth.”

We were on a Young Heroes tour from Abercrombie & Kent, the luxe American tour company that is known for special family trips around the world. The company, known for its authentic experiences, also offers a longer mythology tour appropriate for teens. “Their food tours are amazing,” said Eleni Fotiou, whose company Mamakita.gr specializes in tailored trips for families in Greece and Italy.

The Acropolis, the most visited and famous site in Greece dating back to the 5th Century, is not an easy place to visit. To get to the top requires a steep climb on slippery marble steps and grades. It is hot and dusty but it is also a must-see.

Touring through the stories of the gods and goddesses ancient Athenians revered and worshiped is engaging for kids and adults alike. “Kids are thrilled about mythology,” says Ignatiou, herself a historian and archeologist with a master’s degree. “Parents tell us they came to Greece because the kids wanted to see where the mythology stories come from.”

There is the Temple of Athena Nike honoring Athena as the goddess of successful war strategy and Nike, the winged goddess of victory. The Greeks believed if you had the right strategy and were smart, you would win, even against enemies with overwhelming numbers of soldiers, like the ancient Persians.

When the Temple was built, there was a gorgeous 40-foot tall statue of Athena holding a tiny Nike, with brightly painted carvings telling stories. “Kind of like a comic strip,” Ignatiou explained. “Imagine a time when art was the only way stories were told.”

She conjures a vision of the temples, including The Parthenon, the sanctuary to Athena, when big festivals were held here drawing thousands of Greeks and when up to 15,000 came to see tragedies and comedies at the theater below, the first theater in the world to worship Dionysius. Teens can relate to him as he was always pushing the envelope, famous for inventing wine from grapes but also to show how theater could relieve the stress of everyday life.

The temple, whittled down by wars, theft and weather, still stands as a symbol of perfection. But not really–as the architects slightly curved the columns and the floor so they would seem perfect—to a human eye. “Perfectly imperfect,” not a single straight line or right angle,” our guide explained with a smile.

Amazing! Even the most jaded teens might think so—especially with all the stories of superheroes, gods and goddesses. The Parthenon was built in just nine years with another six to decorate it.

Of course I’m simplifying the myths greatly but imagining the gods and goddesses bickering, being impossibly awful (Hera, the wife of Zeus threw her son Hephaistos from Mount Olympus because he was ugly; she transformed into an old lady to trick a lover of her husband.)

My favorite was the story of Hephaistos (the god who discovered metal work) has a temple in the Agora, near the Pantheon, where the craftsmen once had their workshops.

Why care about him? Remember the baby Hera threw off Mt. Olympus because he was ugly?  That fall caused him a lame leg but that didn’t stop him from succeeding. Raised by Nymphs in the forest, he created such amazing statues in his underground studios that, legend says, they came alive at night to help him—“The first robots,” our guide said.  He was also a kind, gentle man.

But he never forgot what his mother had done to him.  He created a beautiful throne for her that he sent to Mt. Olympus.  “See what I can make,” he implied.  But once Hera sat, she couldn’t get up.  She was furious.

Zeus asked him to release the spell.  He offered him a place on Mt. Olympus.  Hephaistos wanted more—the most beautiful goddess, Aphrodite, as his wife, who grew to love him very much.

Hephaistos showed that even a bad start in life and a disability couldn’t keep him down.  “He used his mind and his hands to get what he deserved,” our guide said. “You don’t have to be perfect or beautiful to achieve admiration,”

A good lesson.  As we contemplate that, she offers us a card to create our own hero or heroine.

Would yours be smart? How would she be tested? What would his flaws be? His strengths?  What animal could represent her? Would they try to combat global warming… pollution… poverty?

“It’s so nice to see parents and kids work together,” she said. … “They see how myths represent our values… aspirations…It’s fun to see what they come up with.”

Who knew a hot, dusty ancient site could be so much fun.