Nantucket island, once the whaling capital of the world 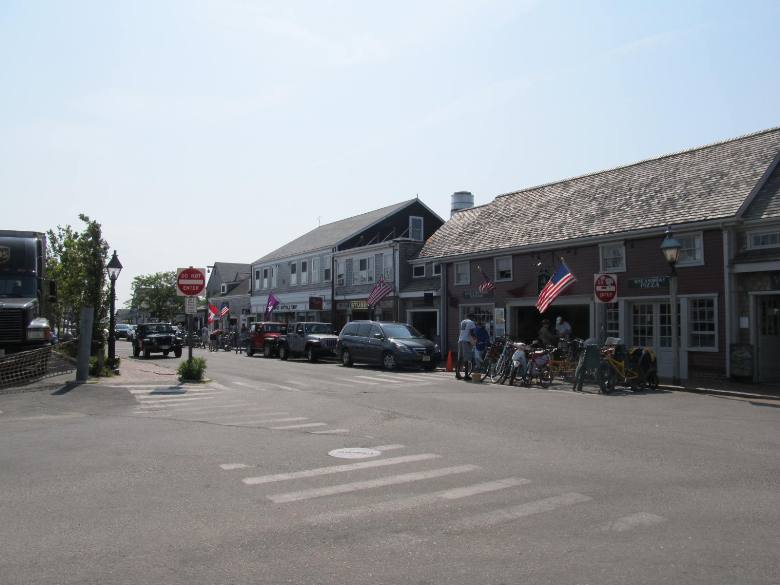 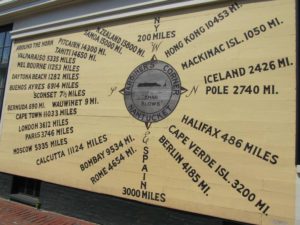 Sign commemorating Nantucket as a center of world commerce

ON NANTUCKET ISLAND — A broken bike in the middle of a 25-mile ride… a lost cell phone… A little saddle sore but we’re still smiling.

How could we not be on the island of Nantucket, 30 miles off the coast of Massachusetts?

“It seems everyone comes here and is happy.  They leave their worries on the mainland,” says waitress Trishana Strachan, who served us oysters at the Brant Point Grill overlooking the harbor.

We were especially happy with that lunch because the oysters were a special –$1 each.

How could we not keep smiling—despite the broken bike chain (Cook’s Cycle Shop not only brought us a new bike to the other end of the island but only charged us for one rental) and the lost cell phone. (If only I had downloaded the Find My iPhone App to locate it!)

This small island — just 14 miles East to West and 3.5 miles north to south — is so pretty with its weathered gray shingle houses, roses climbing white picket fences and cobblestone streets in Nantucket town. There are more than 800 pre-Civil War houses on the island, which shares the name with a county and a town — the only place in the country that all three have the same name.

We stayed in The Veranda House composed of three historic buildings—32 rooms in all) that literally is walking distance to everywhere from The Ferry to the Whaling Museum to bike shops and restaurants and beaches (the island is famous for its 80 miles of beaches).  Stay three nights and get two fast ferry tickets from Hyannisport—a $138 value.  Guests eat the three-course complimentary breakfast outdoors on the porch and relax in Adirondack chairs after a day biking or at the beach in the garden. 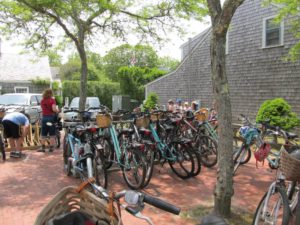 This is the place to come when your kids are elsewhere. (Kids have to be at least 10 to stay here.)   In fact, many people come here in the summer after dropping their kids off at camp in Maine, New Hampshire or on Cape Cod.  Families vacationing here are more apt to rent a house.

Nantucket has that wonderful combination of history (the island literally was the center of the 19th Century Whaling Industry, as you can learn at the excellent  Nantucket Historical Association Whaling Museum) and beaches (80 miles to choose from!).

“The best is to hang out on the beach,” said Luke Phillips, 13, who comes every year from suburban Boston with his Boy Scout Troop.

“You can bike everywhere and everyone is really nice,” added John McGlainn, 14, who has been spending summers here where his grandmother lives since he was a baby. “You can have more freedom here than at home,” he said.

Teens and tweens congregate on what’s called “The Strip” of Broad Street with The Juice Bar—the lines are often out the door for ice cream—pizza and Stubby’s for a sandwich or fries—and bike in packs around the island and to the beaches—there are 23 to choose from. (Families with younger kids like Jetties Beach and Children’s Beach, protected by Nantucket Sound and calm). 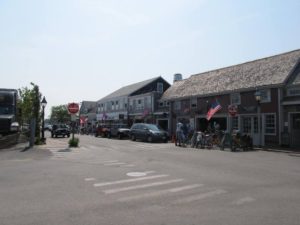 The Strip on in Nantucket Town is popular with teens

And because there is just one main town on the island—and shuttle bus service all around the island—you can get along fine without a car, hopping the hour-long Fast Ferry from Hyannis  (We came on Hy-Line; There’s also  The Steamship Authority. (Fares are a little over $70 roundtrip for adults, significantly less for kids.)

I loved that everyone seems to have a story—the owner of the bike shop whose mother is descended from a whaling family; the young mother we met who has vacationed here ever since she was a baby; the fudge-making retired teacher,  even the owners of The Veranda House who arrived 20 years ago from Pittsburgh on vacation, and decided to make inn keeping  on Nantucket their second act, said Dale Hamilton.  Now his 30-year-old daughter Hillary is managing the Veranda House.

“Nantucket isn’t a drive-by place.  It takes a commitment to get here,” Hamilton said.  That just adds to the appeal—the remoteness (just 900 guest rooms on the island), the history.  Nantucket means “far away place” in the native Wampanoag language we learn at the Whaling Museum.

We went to a talk at the Whaling Museum – check out the 46-foot sperm-whale skeleton and the fully rigged whaleboat — about the island’s history,  learning that the island’s men would leave for years at a stretch to  hunt sperm whales for their oil.  Herman Melville based Moby Dick on what happened to Nantucket Captain George Pollard’s ship Essex when it was rammed in 1820 by a white sperm whale.

I try to imagine a culture where the men are gone to exotic places for years at a stretch at a time when most people didn’t even leave their communities.  The stately Whale Captains’ home are testament to their success; the scrimshaw collection at the Whaling Museum to what the crews saw and did so far from home, carving their memories on whale teeth.

After the decline of the Whaling industry in the late 19th Century, Nantucket began to attract well-heeled tourists including artists and theater people from New York. Today tourism fuels the island’s economy, swelling the population from 10,000 to as many as 60,000 in the summer.

Restaurants were busy. CRU  is known for its raw bar (seven kinds of oysters the day we visited) and waterfront views as well as its lively bar scene. I feasted on local tomatoes and homemade cheese,  grilled line caught swordfish,while my husband had one of the best lobster rolls he’s ever enjoyed.  The home-made strawberry shortcake was a winner too.

Another night, we went to Oran Mor Bistro  spread out across three rooms in a historic Nantucket home. I loved the quiet ambience and the food with its emphasis on fresh local seafood (we tried the Nantucket Flue with polenta), produce and naturally raised meats.

You will also find places here to get pizza or the fixings for a picnic, fish and chips or burgers—more than 50 restaurants.

We didn’t feel guilty about our gourmet dinner after the 25 mile ride bike ride on the Polpis Road trail to the eastern edge of the island  and Siasconset, where I discovered I’d lost my phone somewhere on the trail. There are more than 30 miles of bike trails around the island and it seems you see adults and kids with bikes everywhere.

You won’t get bored whether you want to surf, kayak, tour a lighthouse (there are five on the island) fish ,sail or even golf. (There are three courses on the island.)

The hardest part—after deciding what to do each day—is packing to go home.