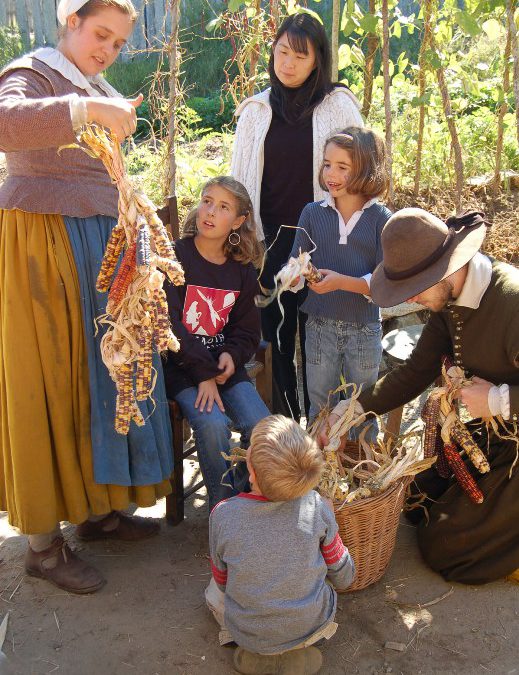 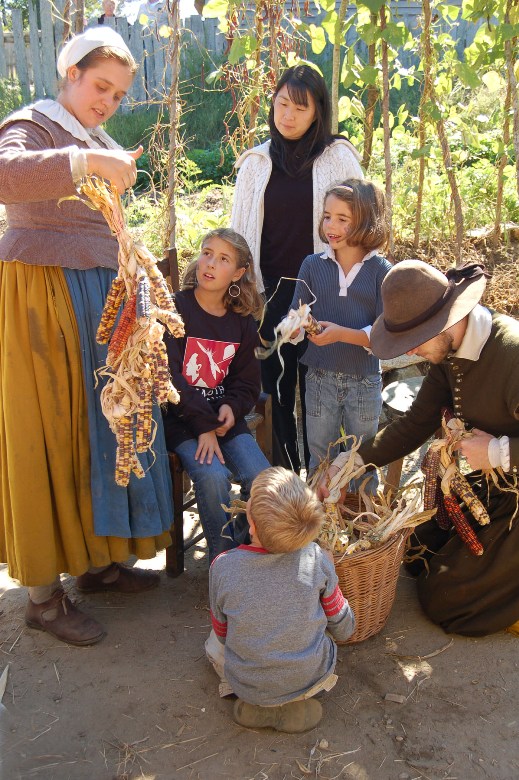 Corn was a valuable commodity in Plimouth Plantation.

No cranberry sauce or mashed potatoes — sweet or otherwise. No pumpkin or apple pie and not necessarily turkey either.

Did I mention eating with your hands? What kind of Thanksgiving is this? It’s the first one, which took place in Plimouth Colony in Massachusetts in 1621. Of course it wouldn’t have been called Thanksgiving — that would have meant a day of fasting in church, not feasting, explains Kathleen Curtin, a Plimouth Plantation historian and co-author of the book “Giving Thanks: Thanksgiving Recipes and History, from Pilgrims to Pumpkin Pie.” That first Thanksgiving — incidentally it was much earlier in the fall, not late November — was actually a three-day fall harvest celebration, Curtin explains, that was as much a diplomatic gathering of the native Wampanoag who lived in the area and the English colonists — 90 of the native people and 52 colonists. There was considerable feasting (venison or duck anyone?) and diplomacy — more like a state dinner than a family celebration — to celebrate the colonists’ first harvest since their arrival in November of 1620. There wouldn’t have been enough sugar for cranberry sauce or an oven to bake a pie. The colonists wouldn’t have had potatoes or apples yet, Curtin said.

The kids, by the way, wouldn’t have been told to go off and play while the adults cooked either. “To pull this off would have meant a lot of work for the kids,” Curtin explained, gathering wood for the fires, hauling water and turning the spits for the cooking. They didn’t have buckles on their shoes or call themselves Pilgrims either.

There’s no better place than Plimouth Plantation in Plymouth Massachusetts on a sunny fall day to debunk the myths of that first Thanksgiving and learn more about the adults and kids who lived here then. Just in November, some 70,000 people from around the world visit, some staying to dine with the Pilgrims. (Book early. The dinners, especially the traditional Thanksgiving Day feast, often sell out far in advance.)

Each day here corresponds to a day in 1627 with the “colonists,” going about their daily tasks cooking (the last of the garden cabbage, one woman explains) mending (a mouse got into the cloak!) and fixing the thatch on the roof, remaining in character all the while. Often kids can pitch in, tending the garden in the summer, helping with lumber in the fall. In 1627, there would have been about 180 people — including 60 kids and teens — living in the settlement.

On the day I visit, school kids from Boston and neighboring New Hampshire and Rhode Island are racing around the re-created historic village (the houses are all so small! There are no bathrooms!) full of questions.

Do you brush your teeth? One 9-year-old asks “Priscilla Alden”. (“We wipe them with a cloth,” she explains.)

Did you fight the Indians? Another child wants to know. (“No, thank goodness,” she says, as she continues her mending.)

Why are the carpets on the table? (“They would get dirty on the floor!”)

Where do the kids sleep? (On pallets that are put on the floor at night.)

Do they go to school? (No, if their parents could read — and only about half the colony could — they would teach them, so they could read the Bible.)

What do you eat for breakfast? (Usually leftovers from the day before.)

A short walk away at the Wampanoag Homesite, contemporary native interpreters in traditional dress are busy explaining what life here would have been like for their ancestors. “The kids always want to know why I’m not cold,” says Darius Koombs, the program manager who has been here more than two decades and was dressed in skin britches with just a small fur mantle — no shirt. “You just adjust,” he explains to the school kids who are sitting around him in the traditional nushwetu (house of three fires) where, he tells them, a multigenerational family of 10 or more would have lived. They think it’s funny that lobster would have been so plentiful it was used for bait.

Outside, kids watch as another native interpreter carefully works on a mishoon (dugout canoe) while a woman nearby tends a sobaheg (stew) of corn, pumpkin and nuts over the fire. “It looks pretty good,” acknowledged 11-year-old Ryan, who was visiting with his school. “Too bad all field trips aren’t this much fun!”

At the Crafts Center, kids watch as artisans create pottery, prepare wood for chairs and beds and tools and baskets for the Wampanoag program, just as they might have been made in the 17th century.

If you can’t get here, consider ordering children’s author Kate Waters’ books “Samuel Eaton’s Day,” “Sarah Morton’s Day” and “Tapenum’s Day,” which depict what life would have been like for Pilgrim boys and girls, as well as a Wampanoag Indian Boy. Also check out Waters’ “Giving Thanks: The 1621 Harvest Feast.”

A few miles down the road, on the State Pier in Plymouth — near Plymouth Rock — other kids were clamoring all over the Mayflower II, a full-scale reproduction of the 17th-century ship that brought the 102 colonists (yes, there were kids on board!) here in 1620. More interpreters on hand to explain what the two-month voyage would have been like (stormy) in such cramped spaces. The bunks weren’t bad, though, pronounced the kids who tried them out.

That first winter here, we learn, half the Mayflower passengers and crew got sick and died. The Wampanoag, meanwhile, had been decimated by disease brought by other European traders, a few years before the English colonists even arrived. In fact, the colonists who arrived on the Mayflower established their Plymouth Harbor colony in Patuxet, a Wampanoag village where so many died that it had been abandoned. Today’s Plimouth Plantation is a few miles from where that original settlement was located.