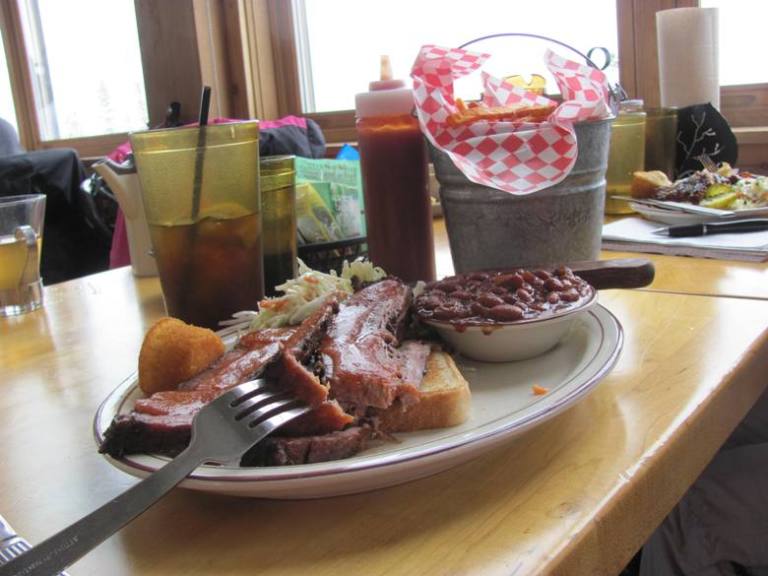 DAY 7 — The restaurant at the luxe new Viceroy at Snowmass is the kind of place where the dinner menu includes braised veal cheek lasagna, pan-roasted black cod, roasted beet salad and lobster winter squash bisque—with entrees over $30 and an extensive wine list .

Yet last night nearly every other table was families with kids who likely were dining on organic chicken nuggets ($11), pizza with fresh mozzarella ($10) or cheeseburger ($11).

That’s because this 173-room ski-in, ski-out hotel on Snowmass Mountain (www.viceroyhotelsandresorts.com/snowmass/), where rooms can go for $625 a night, is hosting 86 kids and 150 Adults.  Over President’s Day weekend, there were 200 kids and 370 adults. You see the kids doing puzzles or reading après ski in the lounge while their parents nurse a drink around the fire.

Certainly this is an upscale crowd. The well-appointed rooms and suites all feature a galley kitchen but hotel executive Ivo Tomulich said the guests don’t cook much.

There’s hot chocolate and marshmallows in the lobby, big glass jars of candy and my favorite, kids’ books in the lounge were families can gather around the fire place.

Reviews are mixed. “I love this place. It’s pretty hip for Snowmass,” says Houston lawyer Tom Bres, here for a long weekend—dads and daughters—with his 14 year old daughter Meg and two other dads and daughters. “It’s the easiest ski experience. Everything is right here,” including a gear rental shop.

Others weren’t so enthusiastic, complaining about small rooms, lackluster service and the breakfast buffet in which most of the hot items were cold. I hope the newly opened hotel is just suffering growing pains as it is a good addition to the Village.

Snowmass, of course is family central –by far the largest of Aspen’s four mountains known for long groomers as well extreme terrain and is signature Treehouse children’s center.

We explore the mountain with  Kendyll, Vresilovic, a mom of two and graphic designer who was a decided city girl, loving her Manhattan life when her chef husband Charlie got what he considered the job offer of a lifetime to work in Aspen.

“I didn’t ski, I didn’t hike. My idea of recreating was tanning on the beach,” she said as we rode up the lift on a snowy day. But 20 years later, she is an avowed Aspen Booster, stressing that while there are celebs here, Aspen is a close knit community of families. “I have the same friends I made playing softball 20 years ago,” she said.

Kendyll takes us to Sam’s Smokehouse near the “Big Burn” area of this huge mountain.  We lunch on Texas-style BBQ brisket and delicions BBQ chicken.

Sue Way, who oversees the children’s ski school, notes that family private lessons (at $625 a day) are becoming increasingly popular, especially since the Viceroy has brought an even more upscale crowd to the mountain.

This is no small ski school:  Way notes that between the five to nine crowd, her school  is offering some 20,000 lessons a season. There is day care at the stellar Tree House Kid’s Adventure Center (www.treehousekidsclub.com) for children as young as eight weeks (an RN is on duty every day!), programs for snowboarders and tweens,  as well as well-priced evening programs at $35 a child.

I think this place makes it as easy as possible — you can pick up all of your lift tickets at the children’s center as well as the kids’ rentals. There are six interactive nature-themed rooms designed for different ages. You can explore the Bear Den with preschoolers, cuddle with your baby in the Butterfly Room or watch your kids climb in the Alpine Climbing Room.

Book ahead for the best deals, Sue Way suggest.  There are environmental lessons (meet Westy the fox) and next season, new safety lessons with a new mountain mascot.

Next:  Old digs at Snowmass too!