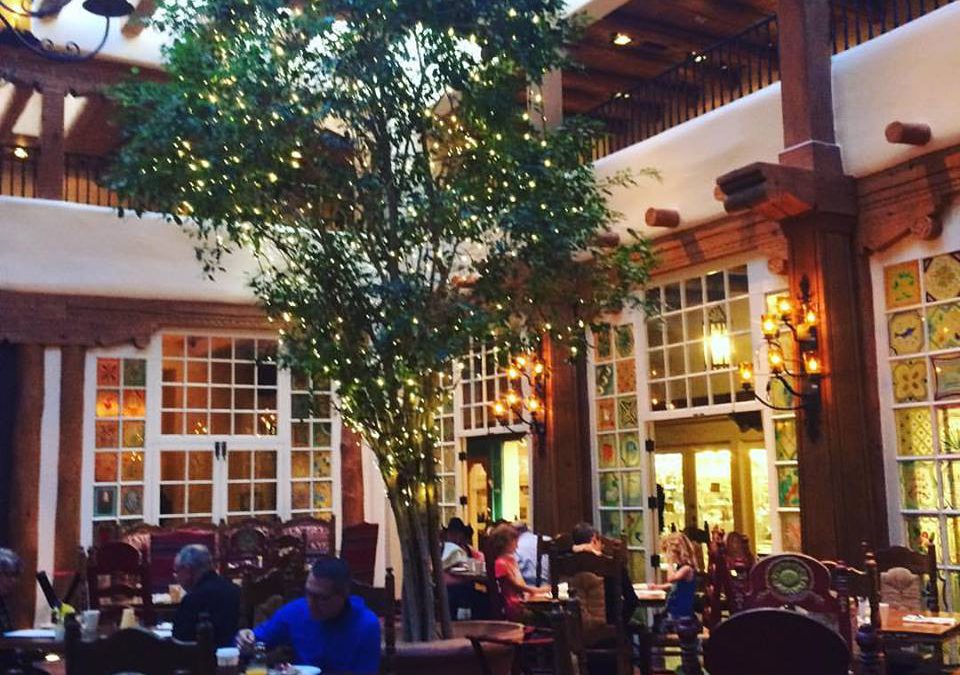 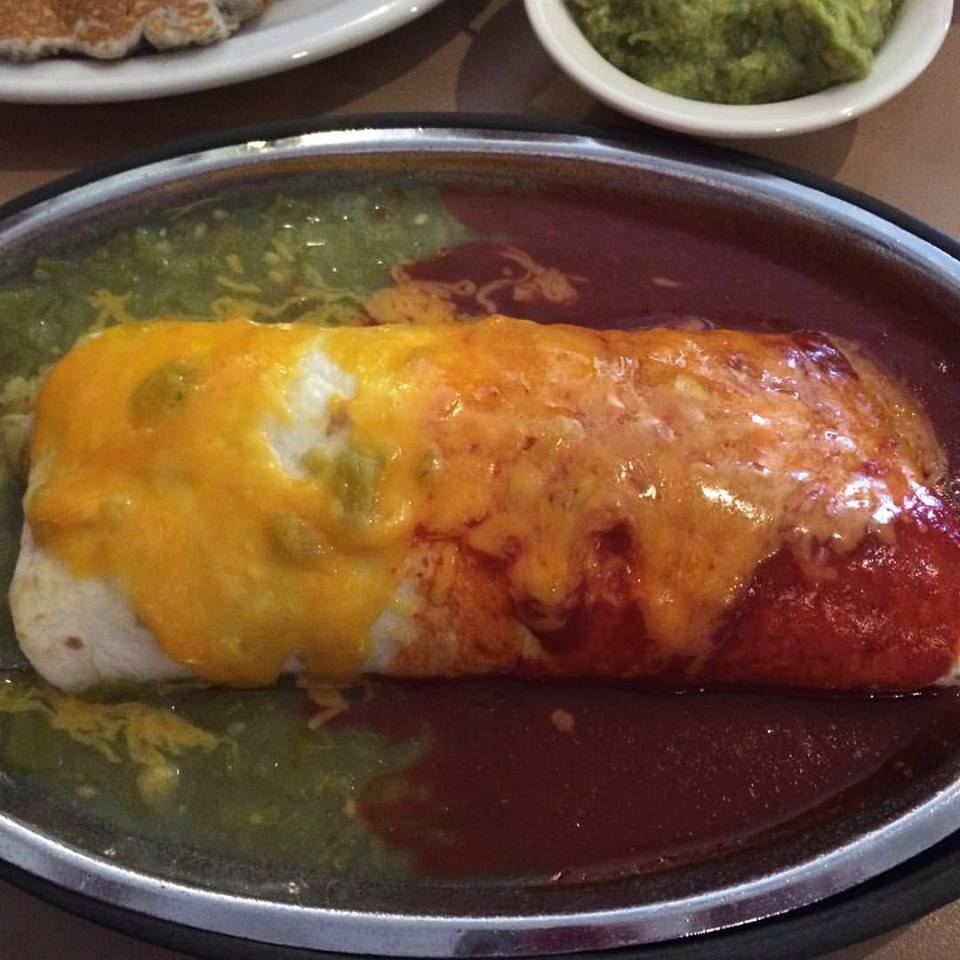 That’s what everyone asks you in New Mexico restaurants.  Translation:

The story goes that a waitress at the popular breakfast and lunch place on Santa Fe’s Plaza, Tia Sophia’s, got tired of the question so she’d just ask people if they wanted both — Christmas!

Now that term is widely used all over New Mexico but Tia Sophia owner Nick Maryol, who took the poplar eatery over from his dad, swears the story is true.

Maryol’s dad Jim first  put it on the menu in the 1970s— a breakfast burrito is typically bacon, potato, cheese all wrapped in a tortilla and smothered with red or green chiles.  (Today you can have it with ham, sausage or bologna too.)  “It’s still the most popular breakfast,” he says—and a bargain at under $10.

Certainly you can eat well in New Mexico no matter what your budget— like the 1,000-seat El Pinto Restaurant and Salsa Company spread on 12 acres in Albuquerque. The company, run by twin brothers, grows its own chiles,  keeps its own chickens and  produces 4,000 cases of salsa and green chile sauce a day.

Santa Fe is  of course is a top culinary destination , whether you want blue corn pancakes at La Fonda on the Plaza , the historic  (and affordable) hotel on the Plaza or a gourmet meal made with all organic ingredients. 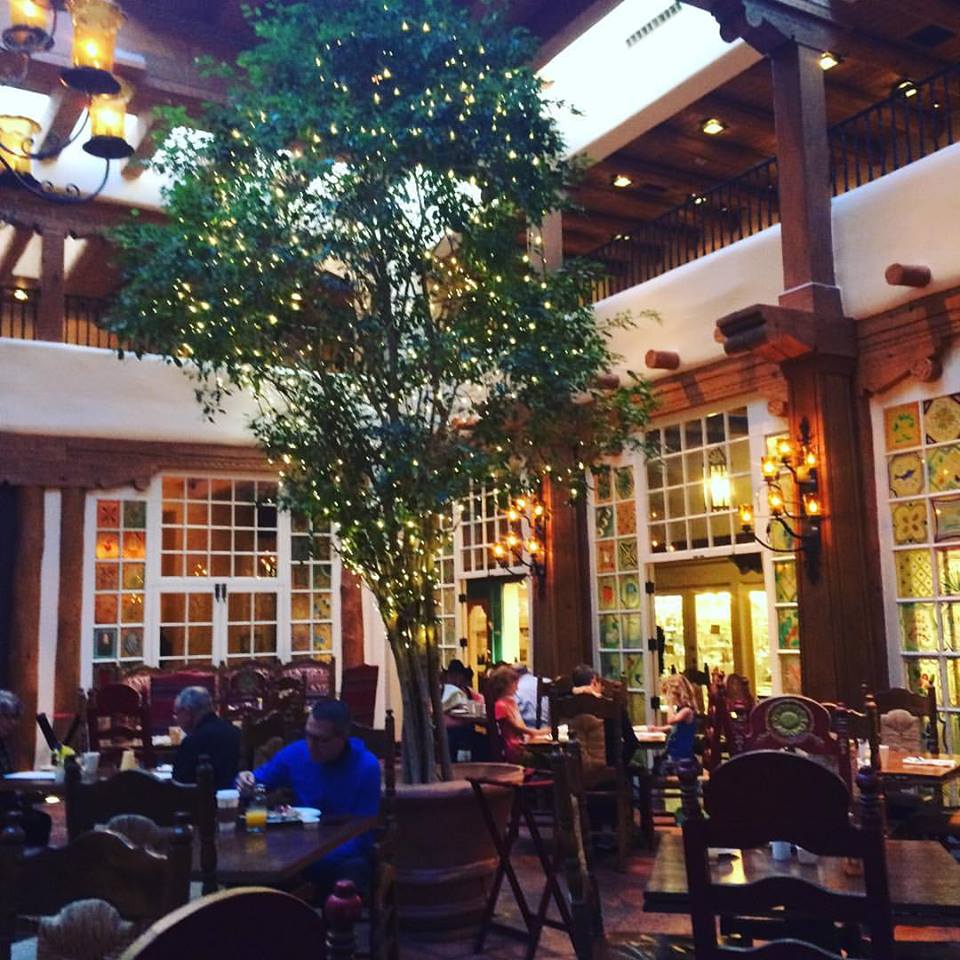 La Fonda on the famous Plaza in Santa Fe

Have you ever had chocolate with chiles?  Kakawa Chocolate House had all varieties as well as irresistible “chocolate elixirs” for the richest chocolate drinks you’ve ever tasted.  There’s a Santa Fe chocolate trail, local brews and of course all varieties of margaritas. But you’ll also find Asian, French, Italian, Indian, Middle Eastern, and barbeque here as well.

Stay at the Four Seasons Resort Rancho Encantado Santa Fe  and take a family cooking class with Chef Andrew Cooper, who has been nominated for a James Beard Award. He’ll teach you to make tamales or tortillas, pasta or enchiladas, even take you to the farmers’ market and come back and cook.  “I want them to see what food really is,” he explains.  “A lot of families are interested in food these days,” he notes.

I loved dinner at Café Pasqual’s where everything is bought from certified organic farmers and producers. Each dish was delicious—mole enchilada, red chile chicken tamale, organic pork cooked in a banana leaf.  Kids would love the skirt steak skewers with guacamole and quesadillas, among other things.

The tortilla soup and banana cream pie was the best I’d ever had at the historic Plaza Café  — Santa Fe’s oldest restaurant on the Plaza serving authentic traditional dishes since 1905. It’s been owned by the Razatos family since the 1940s. Think green chile meatloaf,  street tacos  nachos  posole and enchiladas along with burgers, chicken tenders and even chicken fried steak.  No wonder families love this place!

The best news is I didn’t gain a pound on this trip. Another piece of pie, please!