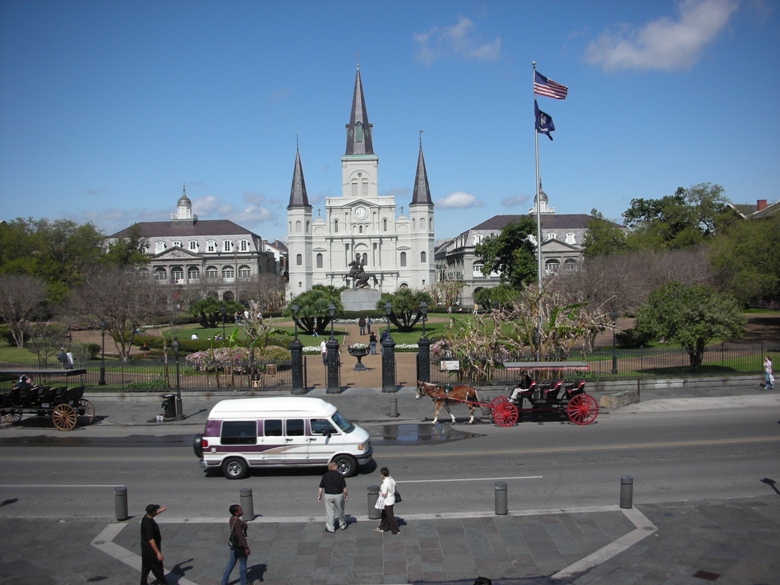 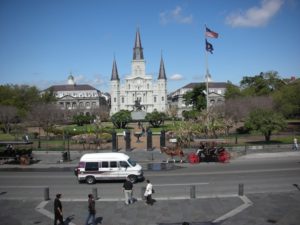 This is a tale of two cities — literally. Walk the narrow streets of the French Quarter, where I was staying in the historic Hotel Monteleone with its Carousel Bar that turns (once a haven for writers) and the city that was devastated by hurricane Katrina in Aug 2005 seems back to normal.

The streets are packed with tourists. Restaurants like the famous Brennan’s are crowded (there is a line out the door before Brennan’s opens for breakfast on a weekday morning and try getting a reservation at Le Couchon that has been discovered nationally by Foodies).

Tourists are listening to street musicians just outside Jackson Square, with its famous statue of Andrew Jackson, and crowding Café DuMonde for coffee and the beignets — the sugar covered doughnut like concoctions that are famous here. Bourbon Street is packed in the evening as revelers look for lively bars. (www.24nola.com)

The city just hosted the NBA All-Star Game, the Allstate Sugar Bowl and has more restaurants — 900-plus — than before Katrina. Last year, Travelocity named New Orleans one of the top gourmet destinations in the world and it’s easy to see why. Some 750,000 people celebrated Mardi Gras earlier this year. www.StudentUniverse.com named New Orleans a top spring break destination for college students this year.

There are plenty of places to buy souvenirs like Mardi Gras beads, pralines (make sure you buy them at a place that makes them, locals say) and caps from the New Orleans Saints and New Orleans Hornets. Both the Aquarium and the Zoo get high marks nationally.

But go just a few miles, and it’s clear to see that all is not yet well in New Orleans. In the Ninth Ward — there are more broken-down, gutted houses than those being worked on, despite the efforts of Habitat for Humanity and stars including Brad Pitt (www.makeitrightnola.org), and Harry Connick Jr and Branford Marsalis (who with Habitat for Humanity are building a Musician’s Village for those who have lost their homes www.habitat-nola.org). The musician’s houses painted in a rainbow of colors — purple, blue, yellow…are a stark contrast to the boarded-up houses, some sliding off their foundations. In some places, all that’s left are slabs or a few cement steps. Here and there are groups of college students and church groups working, painting, clearing debris; working in yards and inside houses. “A lot of people had no insurance and they are working on houses as they can,” says Pam Dashiell, past president of the Lower Ninth Ward Sustainability Center. Many have yet to receive government money. “They need all the help they can get. Absolutely we want more volunteers.” “We just hope people don’t forget and that we still need everyone’s help,” says Jeanne Elizardi, who has lived here all her life and has been deeply involved in volunteer efforts. Even in her upscale neighborhood of Metairie, she points out house after house that has been gutted but not yet restored. “Our whole life is before and after Katrina,” she said. “It’s so sad how long a lot of this is taking for people to get back on their feet.

Elizardi notes that whether you were poor, middle class or wealthy, if you lived in New Orleans, you were impacted by Katrina in small ways and large — from not getting mail to no longer having a house or a job (her husband, a physician, lost his job when his hospital closed).

New Orleans will be back and it’s all because of volunteers,” she says, as we drive through the Ninth Ward. “People can make a real difference — one person at a time.”

In the middle class neighborhood of Lakeview, more houses are in the process of being restored– because people here have more resources. Still, only half have been rebuilt and only 28 percent of those living here have returned. On some empty lots, volunteers are building community gardens in the hopes they will lift residents’ spirits.

If you volunteer to help out in New Orleans, you and your kids will get as much out of the experience as those you set out to help, says Connie Uddo of St Paul’s Homecoming Center Beacon of Hope (www.lakewoodbeaconofhope.org). She has put people to work who have chosen to come to celebrate a 50th birthday, a bar mitzvah, a family reunion. “I don’t think we’ve had anyone on a honeymoon yet,” she laughs. It’s hot, sweaty work. “But even the kids see that they can make a difference,” she says. “It teaches kids to give back. In America, every day is your birthday. Learning to give back is important.”

And all of a sudden kids realize they aren’t thinking about themselves — what to wear, who is angry at who, what homework they are avoiding. “I see a joy in them” says Uddo. “In America we’re all about me, me, me. This is a nice break.”

But she cautions the work may not be glamorous or fun. “Service is about what needs to be done. It’s not about you!”

(If you want to volunteer, visit www.volunteerlouisiana.gov One New Orleans organization, Beacon of Hope www.lakewoodbeacon.org works in the Lakewood neighborhood and will put families — even those with grade-schoolers — to work.