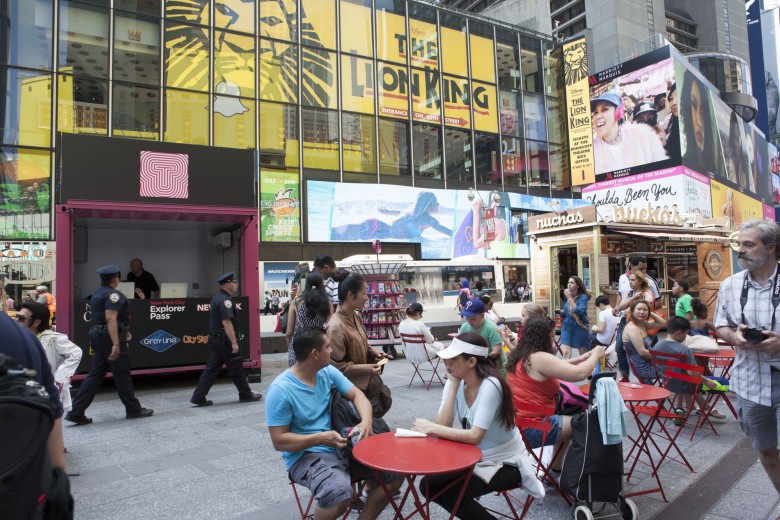 Ready to take a big bite out of the Big Apple?

New York, of course, is always tops on tweens and teens lists of wanna-go places. In fact, according to NYC tourism officials, a record-breaking 17.2 million family visitors with kids under 18 visited New York last year.

If you have a few days before school starts, it turns out August is a good time. Sure it may be hot, but with business travelers scarce, you are likely to get a good hotel deal. According to Trivago, the hotel mega search site, August is basically $100/night cheaper than September and October. (Tip: Stay on a Sunday night for an especially good rate.) Check out the Empire State of Summer deal at the New York Hilton Midtown with half-off Sunday nights and the chance to win a VIP weekend. For those with teens hankering to explore Brooklyn, the New York Marriott at the Brooklyn Bridge has a new “taste of Brooklyn” package starting at $279 a night with extra credits for food.

Besides hotel deals, it may be easier to get tickets to a Broadway play (download the Todaytix app for discount tickets or a restaurant reservation).

There’s always something new to see — like the One World Observatory— recently opened at One World Trade Center, the tallest building in the Western Hemisphere. Ready to step into the Sky Portal for a view you won’t forget?

Especially with teens, put the National 9/11 Museum and Memorial on the itinerary. (Sign on for a guided tour to better understand the artifacts here. There are also special activities for younger kids. Here’s what I wrote about a visit here last winter with a group of teens.)

The High Line, the wonderful park built on top of old New York City freight train tracks, now runs all the way from the Meatpacking District to West 34th Street, and you’ll find places to get ice cream, meals and special activities (how about stargazing Tuesday nights?) along the way.

And you’ll find plenty of special programs and new exhibits at the more than 150 museums around the city. Got any budding entomologists in the gang? The American Museum of Natural History has just opened Spiders Alive! Did you know only half of the known spider species make webs? While you are there, see the real exhibits behind the characters featured in the “Night at the Museum” films with a self-guided tour.

Tip: When you are visiting a big museum like the American Museum of Natural History or the Metropolitan Museum of Art, instead of trying to see everything (it’s impossible), choose just a few exhibits.

Consider smaller museums like one of my favorites, The Tenement Museum on the Lower East Side, which is housed in a historic tenement where immigrant families lived. The different tours showcase the lives and experiences of different families at different eras.

Another interesting bet: The hands-on Children’s Museum of the Arts New York where kids can learn how to animate or record songs, among other skills, and where kids’ art from around the world is on display.

And whether your kids love or hate math, they’ll think differently about numbers and patterns after a visit to the hands-on National Museum of Mathematics.

Whatever museum you choose, take a virtual museum tour before you visit to see what’s on for families. For example, the Museum of Modern Art, where kids 16 and under are always free, has the interactive MoMA Art Lab for kids. (Check their online resource for families at http://www.moma.org/learn/kids(underscore)families/visits#guides.)

At the Metropolitan Museum of Art, where you can always pay what you want and kids under 12 are free, there’s the drop-in Sunday Studio where young artists can create their own art right in the museum galleries. And the roof garden is a great place to take a break amid all the sculptures.

You don’t have to bust the budget either to tour New York. Here are 10 ways to save:

The only hard part is deciding what you want to see first. Ready to let the tweens lead the way?