Nieces on a road trip to Boston and New York City 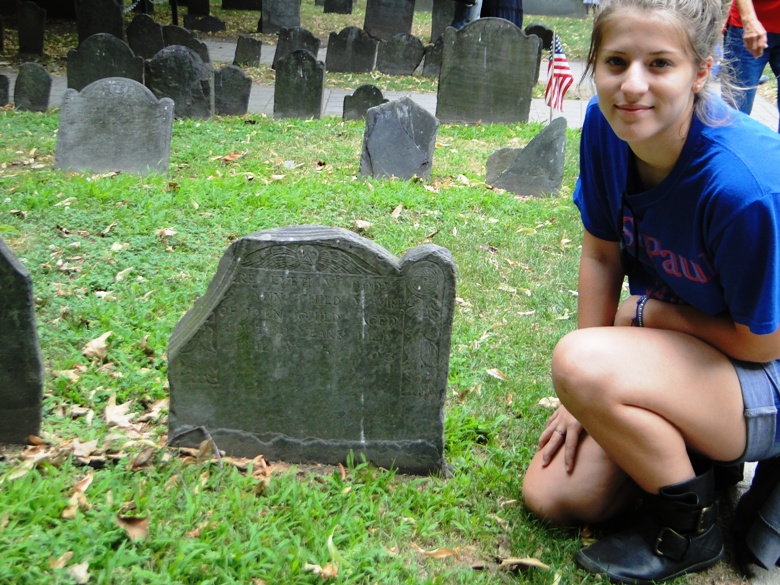 (Note from Eileen:  My nieces from Arkansas recently visited Boston and New York with on a two week road trip with their parents.  The girls used CityPASSes to visit top attractions and museums in New York and Boston.  If you are planning to see the major sites, CityPASS is a great bet, enabling you to save up to 50 per cent on admission for the must-see attractions and skip most ticket lines.)

We were in the Boston area for a few days and decided to go into the city for a day. We parked underneath Boston Common Park and then started off on the Freedom Trail.  If you didn’t know, the Freedom Trail is a 2.5 mile long self-guided trail that runs along the sidewalks in Boston. It’s a great way to see ALL the historic sites of Boston while learning about the history of the city.

One of my favorite places was the small cemetery in which Paul Revere, Samuel Adams, Benjamin Franklin’s parents, and all the victims of the Boston Massacre were buried. It sounds creepy, but costumed interpreters and the information markers along the pathways brought the colonial history and culture to life among the gravestones.

We walked along the Freedom Trail for a while and came to the Old State House. We then used our CityPASSes to go inside the Revolutionary Boston exhibit and learn about the history of the building and about the men and women that helped form our nation. You even get this cool little lanyard that has a card with information about a real person from revolutionary times. On the card is their name, occupation, political views, a summed-up biography, and whether or not they were admitted into the State House. I got Margaret Kemble Gage, a socialite who married the Commander of the British troops in America.   As I worked my way through the museum in the State House, I could see the events of the Revolution through her eyes and compare her experience to those of the people featured on my family’s cards.

Directly underneath the Old State House, we caught a subway train to the Museum of Science. The museum is HUGE. We again used our CityPASSes to get into the museum. We went to three exhibits: the limited time exhibit featuring Egyptian archaeology, the Theater of Electricity, and “Mathmatica” (shudder). I liked the Egyptian exhibit well enough, but I felt that it only explained archaeology in Egypt, the ancient Egyptian idea of death, burial, and the afterlife. It didn’t really explain why they believed those things.  The exhibit did show lots of ways that archaeologists are using modern technology in innovative ways to find ancient Egyptian artifacts.

The electricity exhibit was awesome. It explores and explains the history and uses of electricity. They had the cathode ray tubes that you can touch and see how the electrical charge of your hands affects the electric field inside the tube.  Hands-on and interactive exhibits rule here.  During the theater show they use the largest air-insulated Van de Graaff generators in the world to create lightning bolts indoors.  That is a show you have to see to believe!    My mom, a math teacher, was really excited by the Mathmatica wing (me, not so much).  It is a whole exhibit devoted to explaining several different theories of mathematics.  And even more interactive displays and activities made the math seem interesting – a little.

We literally ran out of time at the Museum and left as they were closing.  There was so much more I would have liked to see.  Also, our City Passes included admission to the Aquarium and Harvard Museum of Natural History but we weren’t able to visit them on this trip.  There are so many things to see in the great Boston area that a family like mine would need at least three days to see everything and use all the City Passes.  I’m thankful that I got to go on a fantastic vacation with my family and see our wonderful relatives that hosted and guided us as we explored this historic and beautiful city.