No better way to get the kids interested in nature 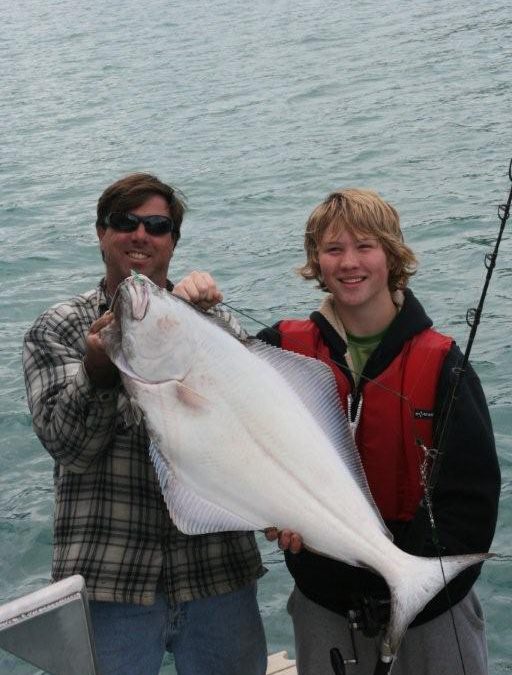 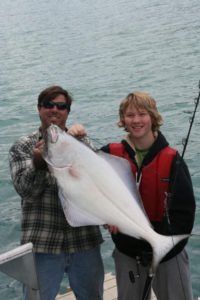 Xander with his halibut

DAY 9 — Thank you, LL Bean! I am slogging through mud and algae — it looks exactly like green slime — and my feet are perfectly dry thanks to my pink and white flowered LL Bean rain boots (www.llbean.com). I’m also decked out in rubber LL Bean rain pants and my Patagonia rain jacket.

We are following a bear trail-seeing where the Brown Bear sloshed through a stream (we see his paw prints) and demolished a stand of Angelica, a wildflower.

PHOTOS We’re on the second to last day of touring Glacier Bay in Alaska via the 12 person Sea Wolf, courtesy of Thomson Family Adventures (www.familyadventures.com). There are seven kids aged 11 to 16-six of them boys — in our group. And in Alaska, of course, we don’t let the rain stop us whether we’re kayaking to a glacier and ice caves, looking for bear on the beach or trying to track them as we bushwhack our way through old forest.

“Rubber boots are the most essential gear,” says Laurie Redmond, on board with her two teenage sons.

“And good rain gear,” adds Faith Barnes, traveling with her husband and son and daughter.

“You need everything quick dry,” adds Gail Blacutt, on board with her 15 year old son.

You don’t need a lot of clothes on a trip like this — there’s no dressing for dinner, no changing four times a day — but it is important to have the right gear. That means good rain gear, socks that wick moisture and reliable rubber boats.

“Fleece instead of sweatshirts,” adds Gail. I learned that lesson the hard way once on a hiking trip in New Hampshire where we got caught in a rain storm in jeans and sweatshirts — not fun!

This morning, we hoped to find a bear on the beach but no such luck. Instead we made our way through the mud, looking at different plants including the Devil’s Club that natives admire for its healing qualities, past all kinds of berries (ever see a salmon berry? Apparently bears like them) scrambling over rocks in an erratic boulder field (so named because the glacier picked up the rocks and dropped them here. “It really makes no sense,” our naturalist Carole Gibson tells the kids.

We’re wet, muddy and hungry but no one is complaining. It is raining hard as we kayak back to the boat for lunch. Chicken Noodle Soup!

We were supposed to kayak more but the water is choppy and it is raining hard — not fun in a kayak — so after lunch we are motoring to another spot in the national park where hopefully, we might catch some halibut.

“My favorite day was when we kayaked to the glacier and saw the ice caves,” said Grant Redmond. That was his mom’s favorite too — not the least of which because she got to spend a couple of hours in the kayak with her younger son.

Kimber Owen notes that her boat is wheel chair accessible — complete with lifts to help those with physical disabilities enjoy a bona fide adventure in the Alaska wilderness. “They can do everything except go ashore,” Owen says. “It’s an opportunity for families to share a real adventure together.” (www.seawolfadventures.net).

Owen laments how difficult it is to get some kids interested in nature—especially teens. “It’s a lot harder than it used to be,” she says. “There seems to be a huge disconnect.” Kids are so accustomed to instant gratification—whether via the internet, TV, Texting friends, video games that they have no patience to wait for a bear or a seal to pop out of the water.

She suggests families embrace opportunities in their own communities to get involved in environmental projects—cleaning a trail for an afternoon, for example. “If they don’t love it, they aren’t going to take care of it,” she says.

A Halibut! 14 year old Xander Majercik has just landed a 25 pound halibut right from the boat. “The biggest fish I ever caught,” he says, obviously pleased with himself. The other boys are all still hoping, their rods in the water. Our Captain Tom Matthes, a former commercial fisherman, and engineer Keith Jenkins are helping the boys. Some of the others in the group have gone off to kayak.

I wonder how our cook Linda Fitzgerald—nicknamed Cheffy—will cook the Halibut for dinner—our last on board. A fitting final dinner, we agree. It was great!