No TV, no internet, so what? 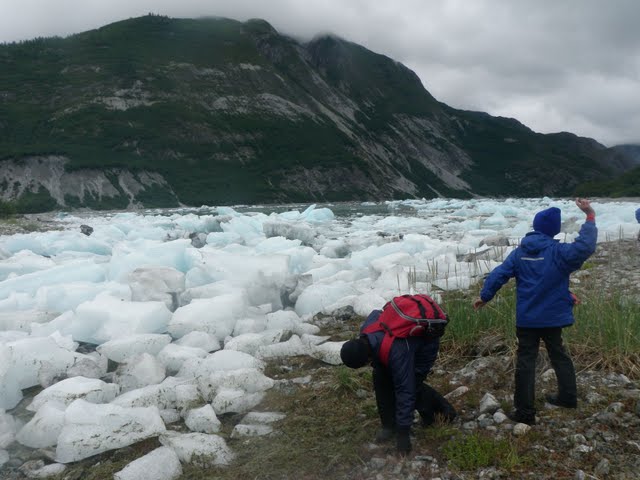 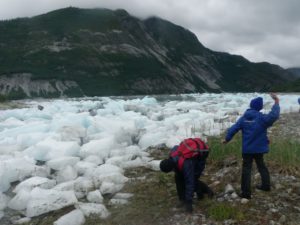 Skipping rocks through the ice field in Alaska

DAY 7 — By our third day on the boat, it doesn’t even seem the kids on board the 12 passenger Sea Wolf (www.seawolfadventures.net) — six boys from 12 to 17 and one 11 year old girl — are even missing TV, texting and the internet that much.

“If I had it I’d be on it but I’m not really missing it,” said 15 year old Jake Blacutt. Instead, they’re playing marathon games of slapjack and hearts, making origami, and with the grown-ups — telephone charades. Seventeen year old Drew Redmond shows 13 year old Miles Singer card tricks. Eleven year old Charlotte doesn’t let the boys phase her. It is a lot easier, I think, for the kids to get to know one another without the distractions of TV, internet and video games.

PHOTOS Carole Gibson, our “mentor” has showed them games to teach them more about animals too. And we’re keeping a running tab on a board of what we’ve seen so far — six Bald Eagles, one harbor seal, four brown bears, Tufted Puffins, Pigeon guillemot, Black Legged Kittiwake, Horned Puffins and more.

Maybe because they can’t retreat to a computer or a TV, they are all more engaged with each other — and the grownups. “It’s great that there are other kids,” says Faith Barnes, mom of two of the kids on board and a school social worker. “What is nice is that you have together time but it is also OK to go off to your cabin on your own.”

This morning, we are in the Muir inlet (famed naturalist John Muir, we learn, built a cabin near here. After a hearty breakfast (frittatas, toast and peanut butter, cantaloupe and grapes) we suit up for a short kayak to the McBride Glacier. I feel like a mummy between my layers of clothes, my life vest and the “skirt” designed to keep water out of the kayak.

We pull the70 pound kayaks up on the beach and about 100 yards inland — about the length of a football field — to protect them from the tide, away from the beach that is dotted with giant chunks of ice — brought in the last tide — and then we set off on our “hike,” scrambling over rocks, past ice bergs, Owen stopping to explain the glacial geology, the striations in the rock. We pass purple fireweed and rare white fireweed. Wolves — and wolf pups — are howling. We hear the now familiar snap…BOOM in the distance that means the glacier is calving, though we can’t see it happening.

How about skipping stones between icebergs? Iceberg safety 101: No climbing on them because pieces can unexpectedly break off. But aiming rocks at the natural holes that have formed in the ice is fine and pretty soon the boys are challenging each other, posing for pictures in front of chunks of ice taller than they are.

We make our way through heavy brush on a trail that isn’t really a trail to an overlook where we have a spectacular view of McBride Glacier. “The bay with all the icebergs stuck in it was pretty cool,” said 17 year old Drew Redmond.

Even better, it doesn’t rain! By the time we make it back down the trail and to the kayaks and paddle back to our boat, its 3 p.m. and time for a late lunch. We devour homemade pizza and soup. Another hour and half paddle to Riggs glacier is on the afternoon itinerary but since it is so late, some of us opt to cruise past the glaciers instead.