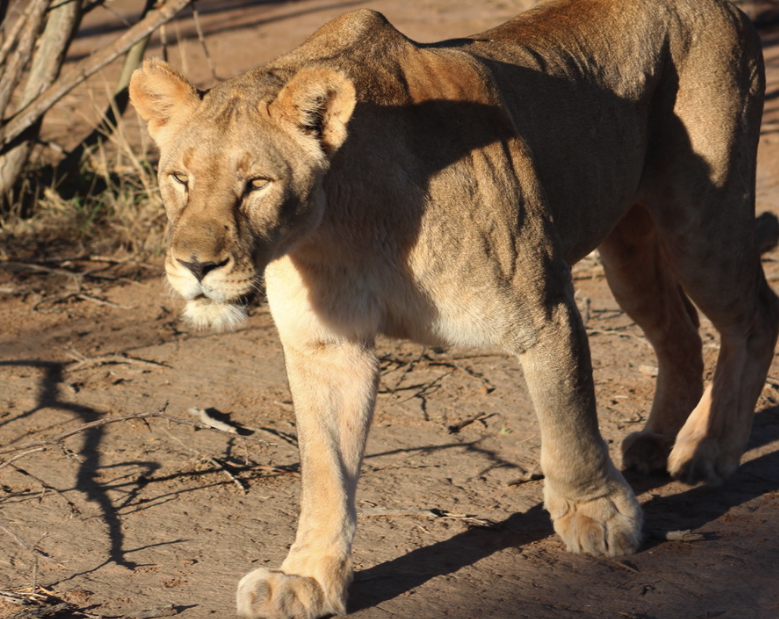 MADIKWE GAME RESERVE, SOUTH AFRICA — She’s out for her morning walk with her daughters and a friend. Maybe they’ll stop for a snack. Maybe they’ll run into dad, who is out and about. They stop for a break under a big tree in the park.

A lioness on her morning walk inMadikwe Game Reserve

That’s where we meet the two lionesses and the young ones, each about a year old.  Of course this isn’t just any park.  It’s the vast malaria-free Madikwe Game Reserve in South Africa, some 185,000 acres in the North West Province bordering Botswana to the North.

Opened in 1994 by the South African government to attract tourism and jobs here, the preserve is home to the famous “Big Five.” Before 7 a.m., we’ve seen four of them–-lions, elephants, Cape buffalo and white rhino. The only species missing—leopard.

“Like Kruger National Park but without the crowds,” crowed one of the Sanctuary Makanyane Safari LodgeGuides. 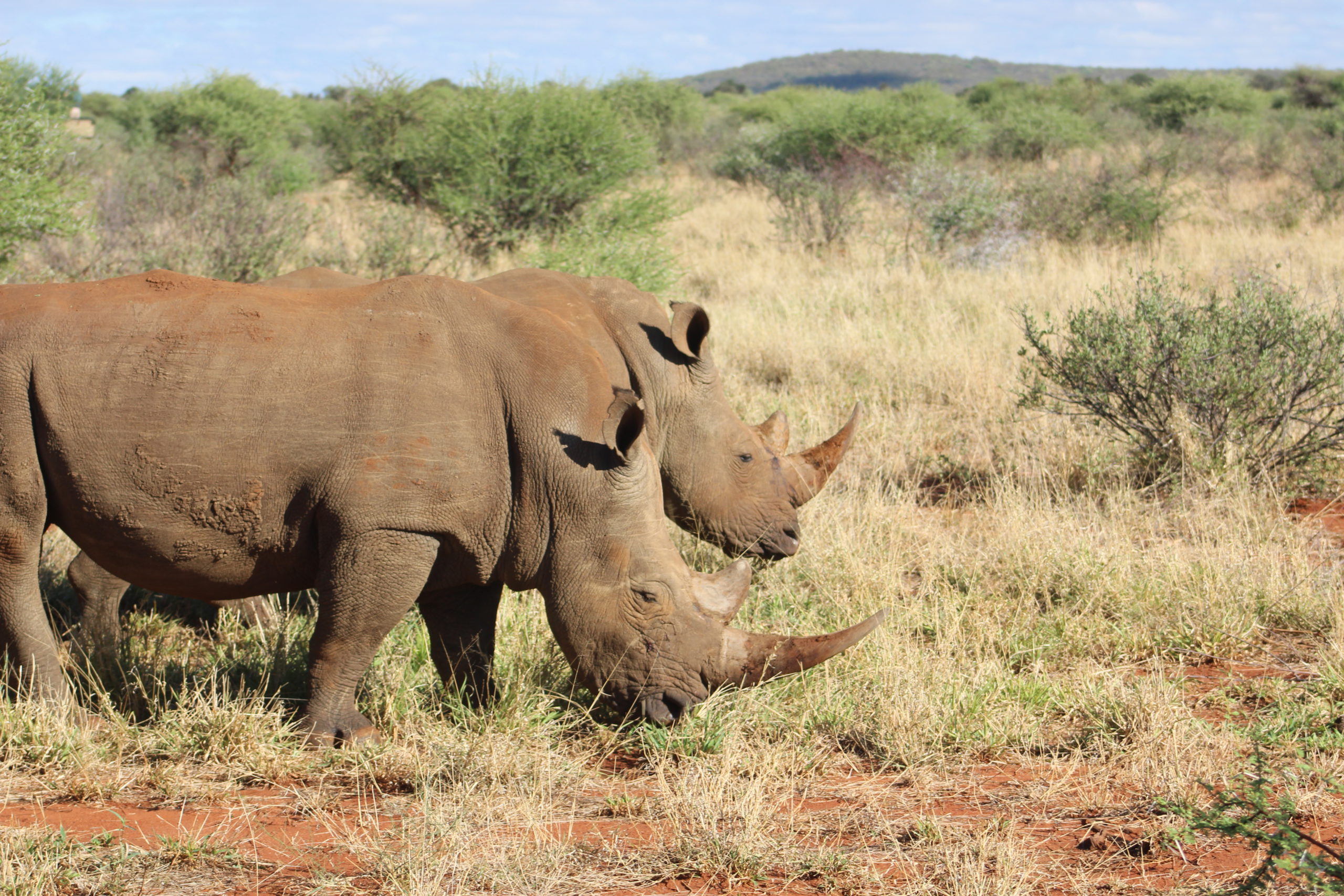 A lioness on her morning walk inMadikwe Game Reserve

There are other lodges in the vast preserve, but only eight thatched-roof suites here overlooking the Marico river with glass-paneled bedrooms offering views of the river. “Look out for animals swimming,” suggests our guide Reuben Johann Grimsell, 23, and as excited to spot the animals as we are. Sure enough we spot a large bull elephant wading chest deep in the water—in the heat of the afternoon. The graceful landing of a grey heron followed that.

Last night, after we arrived by small plane amid a torrential downpour, we went out for an early evening game drive with Grimsell in a 4×4 Toyota Land Cruiser. Amazingly, we saw two of the park’s six cheetah, one with her just-caught dinner, a baby impala. 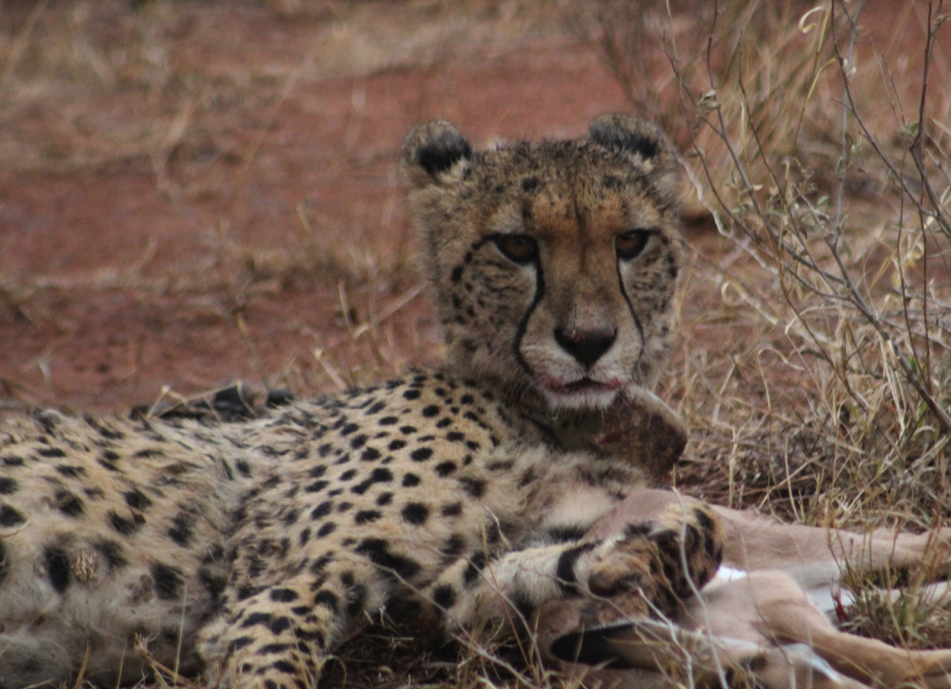 The cheetah were among the animals reintroduced to the park as part of Operation Phoenix, the largest translocation of wildlife ever undertaken—entire breeding herds of African elephant, Cape buffalo, black and white rhino–along with various species of antelope, all historically found here.

The Sanctuary Makanyane gets its name after the rare African wild dog—which were also reintroduced, bringing the large mammal population to more than 10,000 with ore than 60 animal species and over 350 bird species. 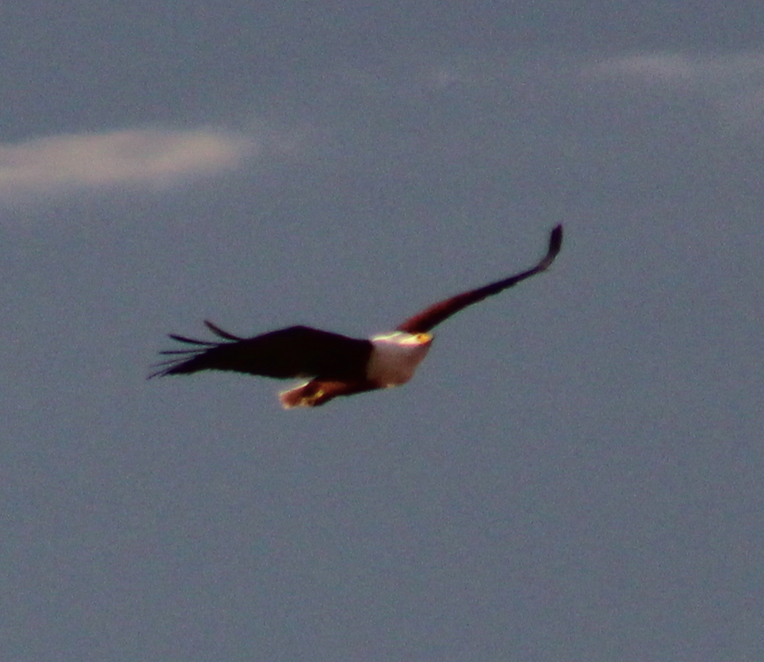 We see birds everywhere we look—Egrets and grey heron, the distinctive fhite-faced whistling ducks and knob-billed ducks,  the tiny turtle dove, the pale chanting goshawk with its black and white wings, the helmeted guinea fowl with its distinctive blue head, the vereaux eagle-owl with its pink eyelids and the southern yellow-billed hornbill (also known as the “flying banana”) with its big yellow beak, among them.

We see mother and baby impala just a few days old, elephant crossing the road right in front of us, blue wildebeest and white rhino—so named because they have a wide white lip, grazing in the grass.  “They eat all day,” Grimsall says. After all, they weigh 1.5 tons.

Sadly, they are the targets of poachers. Some asians believe rhino horn to be an aphrodisiac and one can fetch nearly $200,000, making poaching lucrative. The five year prison sentence for getting caught isn’t enough to deter them, Grimsell said.

Young warthogs are having a play date, scuffling over their newest “toy” — a hole they’ve dug to scratch off insects. There are zebra everywhere. And jackals. 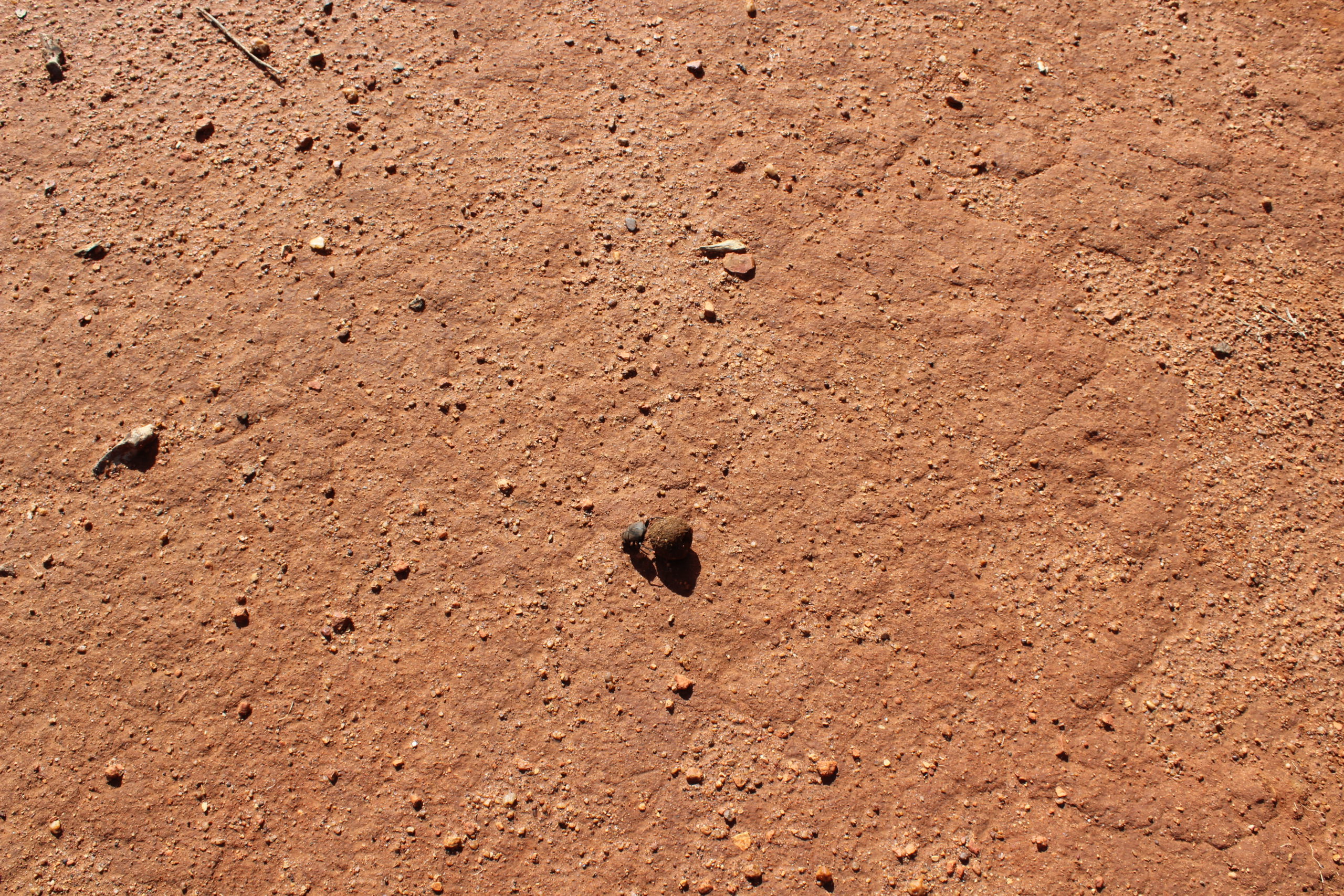 When we stop for coffee in the bush, we encounter a dung beetle—the males create dung balls from rhino or elephant dung and then roll them along until they encounter a female who latches on to the ball, ultimately laying her eggs inside. Grimsell said that when he guides families with kids, one activity is the traditional  dung spitting Contest with impala dung as it is small.

Another is a stop at the so-called “Toothpick Tree” (the Common Quarry) which can be a natural toothbrush in the bush. Kids also like to hear about the Weeping Wattle, also known as the Toilet Paper Tree because of its smooth, soft leaves and practical use in a pinch. And finding many of the characters in the Lion King never fails to entertain, Grimsell said.

Truth be told, this lodge is known more for honeynooners—no kids under 12 are even permitted. But for families with teens interested in wildlife and birds, this can be a great bet as it is small and it is so easy to see the animals up close in their natural habitat with knowledgeable and enthusiastic guides. There is also, spa treatments and a heated pool.

Those interested in the stars will have plenty to see here and between August and May can even sleep out under the stars in a high tree-house like structure. 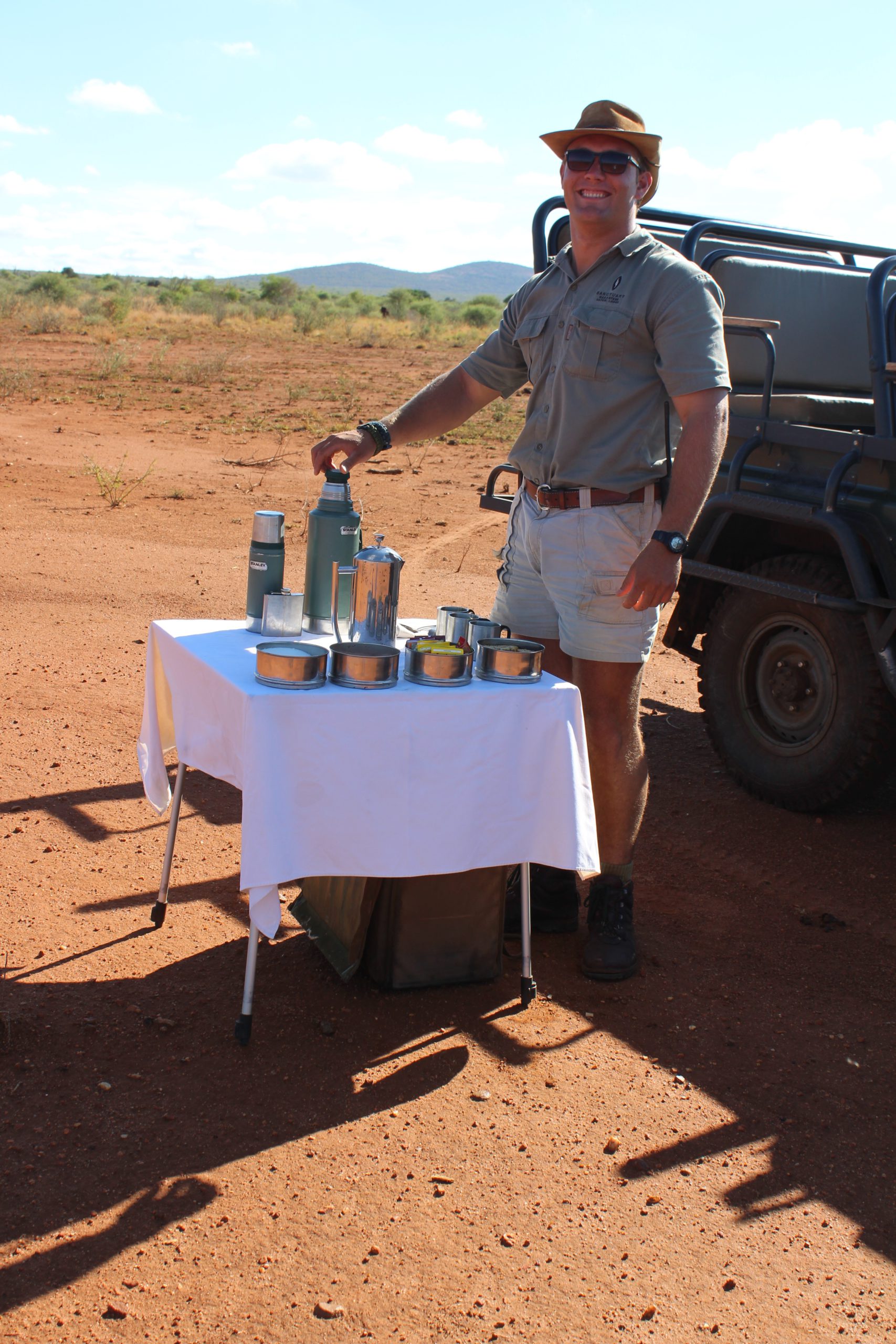 Morning coffee service in the bush at Madikwe Game Reserve

There are opportunities to take bush walks too, right in the animals’ footsteps (just remember if you are under 16 or over 60, you are required to bring a medical certificate vouching for your good health).

And you certainly won’t go hungry. (We had arrived late in the afternoon after a bumpy 45-minute flight on a nine-seat plane from Johannesburg. Make sure you are going in the right direction into the bush! We inadvertently were first flown an hour in the complete opposite direction and had to backtrack after the other passengers had been dropped of and  the plane refueled in Johannesburg). We missed the elaborate afternoon tea but, after our late-afternoon game drive, we came back to a delicious dinner and the chance to try some new foods— spiced quail, pan roasted kudu (antelope) filet and South African kingslip fish filets among them.

Our wake up knock on our door is at 5 a.m. as we must be out early to see the animals being active. By the time we meet up with the lion pride, for example, they already are heading to their favorite spot under a tree where they will snooze until late afternoon when it gets cooler, explains Grimsell.

We return at 9:30 am for a huge breakfast—grilled ostrich skewers with tomato jam; cold meats and cheese with homemade chutney, vegetable spring rolls, pasta salad and then a traditional English breakfast with eggs, bacon and sausage, mushrooms, potato, beans and grilled tomato.

Afterward, a massage is on the agenda on our deck overlooking the river as the birds chirp.

By the time the lionesses wake up, we’ll be out four-wheel driving ccross the bush again.  Maybe we’ll see the elusive leopard tonight!