Old holiday traditions give way to less drama this year 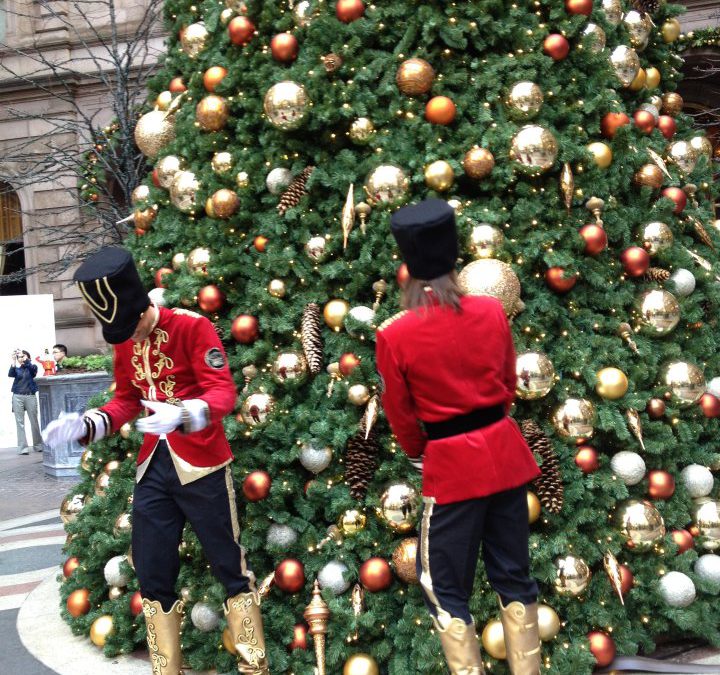 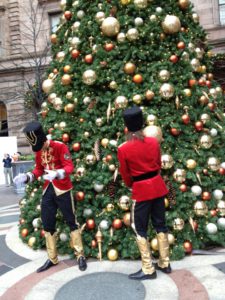 Nutcracker characters in action at The New York Palace

To be honest, the Rudolph the red nosed cocktail was a little too sweet. The 12-year-old wasn’t too fond of the North Pole ice cream either (too much pumpkin spice.)

But it didn’t matter.  We congratulated him on trying new things and he loved his Palace Guard burger and fries.

Old holiday traditions are fine—most of the time, of course, when family drama doesn’t get in the way

But there’s something to be said for creating a new holiday tradition with no drama, especially when new young friends are part of the equation. We were joined by 12-year-old Enesi Domi, who we got to know last summer when he spent some time at our home through the Fresh Air Fund.  He and his family have only been in the United States a little more than a year and  he gobbles up new experiences just like burgers, though he was happy to leave the pumpkin ice cream to the grownups.

We took him to  a Holiday Fantasy Brunch at  The New York Palace hotel—decorated to the nines for Christmas complete with  Palace Guards who greeted us beside the huge tree in the courtyard and the Snowflake Princess (loved her sparkly silver shoes) who doled out holiday snowflake cookies.

Our new holiday tradition actually started  early Thanksgiving week I joined my daughter and her boyfriend for a visit to her favorite museum — the American Museum of Natural History — to the new exhibit Beyond Planet Earth: The Future of Space Exploration. Then we stopped by the Origami Holiday Tree which has marked the start of the holiday season at the Museum for more than three decades.

The theme of this year’s 13-foot tree is the Museum’s Biggest and Best with ornaments inspired by the current World’s Largest Dinosaurs. There is the iconic blue whale, elephants, dinos, diamonds, a satellite — even Mars. Volunteers have been working since July to fold the 500 creations. I was sorry we were too late that day to meet the volunteers who teach visitors the art of origami. (They will be on hand throughout the holiday season, though.)

My daughter and her boyfriend Dan Foldes, visiting from San Francisco, asked us to include a play on the holiday weekend agenda and I thought that was a fine  new tradition.  Of course we couldn’t get tickets to The Book of Mormon, their first pick, but instead went to see War Horse at the Lincoln Center Vivian Beaumont theater.  The tony-award winning production didn’t disappoint with the giant horse puppets and story about a boy from Devon who lies about his age to enlist and fight in World War One because his beloved horse Joey had been sold to the Army.

We learned that Michael Morpurgo, the author whose novel inspired the play and a movie to be released at Christmas, got the idea when he and his wife moved to Devon to start a foundation to bring inner city children to a farm environment. My daughter works for a similar foundation – Vida Verde — south of San Francisco, teaching urban youngsters about goats, forests and the ocean.

When I was a kid, we used to get bundled up and head to Rockefeller Center to see the huge tree and decorated store windows on Fifth Avenue. When my kids were small growing up in Chicago, we’d head to the Museum of Science and Industry to see  Christmas Around the World and Holidays of Light, a Chicago tradition which began in 1942 with a single tree dedicated to the Allies of World War II.  Today it includes  not only the Museum’s 45-foot Grand Tree  but  50 smaller trees beautifully decorated by volunteers from Chicago’s ethnic communities to represent their various cultures and holiday traditions.

Check out our 2011 Guide to Holiday Lights and see where you can start a new tradition going to visit some lights somewhere new. Maybe it will be with a visit to a hotel. Many, including The New York Palace, are offering special holiday packages. (Check out the giant gingerbread house and chocolate train!)

Certainly it’s a wonderful respite from the holiday craziness to let someone wait on you—just for a night.

It’s also pretty nice when the kids are old enough like mine to take over some of the cooking. I taught my 25 year old daughter how to make the stuffing my mother and grandmother always made.  Reggie, in turn, taught Enesi how to make pumpkin pie. He also helped her boyfriend to prepare the date-goat cheese and bacon appetizers that prove such a hit at our holiday gatherings.

This year, like a lot of families, though, I didn’t have what I wanted most—my entire flock of kids home.  My 20-year-old Melanie is studying in Thailand.  Technology certainly helped keep us from missing her too keenly. She sent us a “what I’m thankful for—my family” email that made me cry on Thanksgiving morning.  A little later, we were able to “Skype” with her via video on our computers.

I was thankful for the technology that has kept us close while she’s half a world away and the new traditions that not only add to our holiday gatherings but seem to keep family drama to a minimum.