On a cruise for the first time 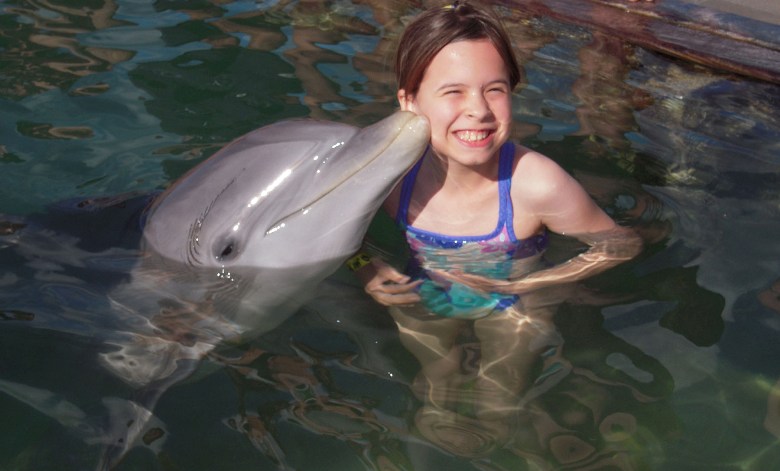 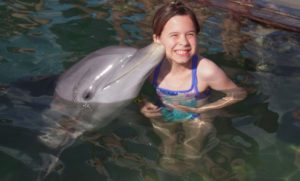 Avery Pearson, 9, up close and personal with dolphin on Norwegian shore excursion at Grand Bahama Island.

Todd Hawkins never figured himself for a cruising kind of guy. He grew up camping and still loves long road trips. But he got married to someone whose family vacation style couldn’t have been more different.

So there was Hawkins, a carpenter from Bloomfield, N.Y., somewhere he never figured to be — aboard the Norwegian Gem (www.ncl.com), along with his in-laws, his wife, Mindy, their 3-year-old daughter, Ava, and the rest of his wife’s family. The four preschoolers in the group danced to the band, as the ship sailed out of New York, past the Statue of Liberty. The grandparents, who had treated their three daughters and their families to the trip, looked on smiling. “It’s great to have everyone together and I don’t have to cook!” said grandmother Beverly Neil, Rochester, N.Y.

“It’s not what I would have chosen,” acknowledged Hawkins. “But I’m having fun.” It turned out Hawkins had plenty of other new cruisers to compare notes with on board the Gem. More than 70 percent of those on the March cruise from New York City to Florida and the Bahamas — 2,210 passengers out of 2,873 — were first-time cruisers, many with kids (there were 500 children aboard, including 25 under the age of 2), many traveling with extended family.

According to the Cruise Lines International Association, more than 1.6 million kids cruised last year and that number continues to increase, along with the number of multigenerational bookings. (First-time cruisers account for 45 percent of all annual cruise passengers.) It’s easy to see the appeal. For one thing, the prices keep dropping (look for kids-sail-free deals on Costa (www.costa.com) and MSC Cruises (www.msccruises.com) and discounts are always available on Disney Cruise Lines. (Disney (www.disneycruise.com/kids50) just announced a new kids-half-price deal for spring.) And Holland America (www.hollandamerica.com) offers reduced rates and extra freebies for family reunion groups.

Families like that they pay one price for lodging, food, entertainment and morning-through-evening organized kids’ activities. On NCL’s Gem, for example, parents fed their young children (the Kids Cafe offers a buffet full of kids’ favorites and a large-screen TV that shows cartoons), shepherded them to the Kids Crew (even 2 year olds are welcome) and then went off for an adult dinner in one of the ship’s six specialty restaurants (steak, sushi or French bistro?).

“You have fun with the kids but you also have adult time and it doesn’t cost anything for the baby-sitting,” said Fran Russo, a physician from New Jersey cruising with her husband, her two young kids and her in-laws.

And with more than 30 domestic ports, many families can drive rather than fly to meet their ship. Chantal Hirsch, for one, said since they drove from Montreal to meet the ship, their cruise didn’t cost much more than flying her family of five to Florida and staying in a relative’s condo. “It was a very good deal and so easy.”

Veteran cruisers say you can save more money by planning your own shore excursions rather than opting for what the cruise line offers. (Check out what cruisers say about different ports on www.cruisecritic.com.)

Wherever you want to go, just make sure to choose the right ship for your family. Are there organized programs available for your kids, whatever their ages? A separate teen and tween club? Family-style entertainment? A sports deck? (Aboard the Norwegian Gem there was everything from a climbing wall to basketball court.) Is food available all the time, especially for kids who aren’t hungry at breakfast but starving an hour later?

And be prepared for all kinds of weather, including rocky seas and rain, and cabins that are smaller than hotel rooms. “And if you are sharing with your parents, bring earplugs in case your dad snores,” offered Alec Rapkin, 14, from Montreal and cruising aboard the Gem with his parents.

Also know that if you’re cruising with teens, you won’t see them much on board. “I didn’t have to see my parents at all, except when we got off the ship,” boasted 14-year-old Chelsea Hybeck, a first-time cruiser from Montreal. She was enjoying an afternoon snack with a gaggle of her new friends aboard the Gem. The teens even ate dinner together.

Hybeck and other young cruisers said they’d encourage first-time young cruisers to head to the kids’ club the first day. “My biggest surprise was that there were so many kids … that was a good surprise,” said Melora Cook, a 9-year-old first-time cruiser from New Brunswick, Canada.

“The teen club is what made the trip so fun,” added 15-year-old Jeremy Carrier of Montreal.

Cruise lines, for their part, are ramping up family activities and amenities. Disney Cruise Line, which is one of the few to offer infant day care at sea, now is reducing the heavy lifting for young families by enabling them to order baby supplies ahead of time so that they’re waiting for them in their stateroom when they arrive.

Kids shouldn’t be whining that they are bored, either. They can create LEGO murals aboard NCL ships, for example, or Celebrate SpongeBob SquarePants’ 10th birthday with a week’s worth of special activities, along with special Nickelodeon Family Cruises on Royal Caribbean (www.nickfamilycruise.com), complete with interactive Slime Time. Favorite Nick characters like SpongeBob, Dora and Diego will be on board. (Kids sail free this summer on the Nickelodeon Family Cruise with Royal Caribbean International, July 26 through Aug. 9 on RCI’s Mariner of the Seas, and Aug. 9 through 16, on Freedom of the Seas.) Princess Cruises (www.princess.com) has teamed with Klutz to offer arts-and-crafts projects for junior cruisers and yoga for kids, while Holland America has launched its own kids and teen culinary program.

And that’s not counting the scavenger hunts, talent shows, pool parties, kids game shows and movies that are de rigueur on ships these days. There’s just one downside, however.

“It goes by too fast,” said 15-year-old Philippe Blanchet.

He and his other new friends were already planning their next cruise. They just have to tell their parents.