On a different kind of cruise in Alaska 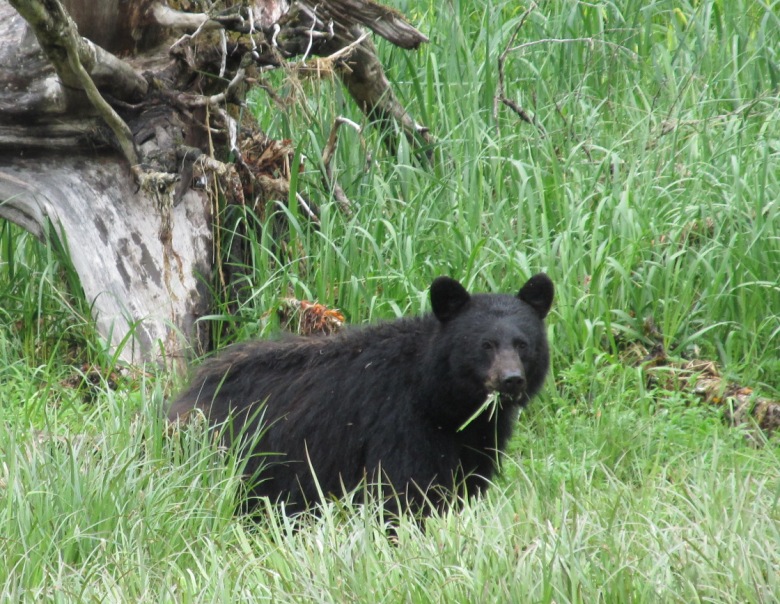 The old couple sitting on their porch wouldn’t stop staring at us.

They didn’t even move when we trained our cameras on them.

No, we weren’t being rude or intrusive. The old couple was a huge pair of bald eagles watching us from a tree stump as we kayaked into the Salt Chuck, an area of Port Houghton in Southeast Alaska, on an excursion from our small 78-passenger ship, the InnerSea Discoveries’ Wilderness Discoverer.

What a morning — water a calm as glass, The harbor seals popped up in the water as if on cue, to say come play! Birds flew overhead. The mist lifted over the mountains. It was quintessential Alaska wilderness and it wasn’t raining!

We sat in our kayaks mesmerized as a bear chomped on greens on shore, totally oblivious to our presence. Wow!

Our six-mile paddle — one of the most spectacular I’ve ever enjoyed anywhere — was just an example of how different touring Southeast Alaska on a small ship like this is from the way most visitors see this region — from a giant cruise ship.

“We plan the itinerary so that we can stop like this,” says our captain, Dano Quinn, who has been piloting vessels in Alaska for the last 16 years. “The best of Alaska is the wilderness,” he adds. “Not in the towns and we provide the opportunities for that.”

That’s why we anchor in pristine wilder coves, not towns, and stop to watch the humpback whales or a glacier calve in front of us. “You can see Alaska from the big ships and they will take good care of you,” says Second Mate Mike Kellick. “But with us, you can touch Alaska.”

Literally. Because we can kayak from a landing dock on the back of our small ship, we can go out for a half-hour or two and a half hours. An “excursion” might be a hike following a bear’s trail, a walk through a meadow studded with wildflowers — purple lupine, red Indian Paint Brush, brown chocolate lilies, yellow marigold — a snorkel in the frigid arctic water (cold even in heavy neoprene suits!) or stand-up paddle-boarding. There’s even the chance to take part in a polar plunge — requested by the teens on board — jumping off the boat into the cold water (just 40 something degree) followed by a soak in the deck hot tub, the wilderness all around you. Read more about our adventures in my travel diaries)

Did I mention there’s no extra charge for these excursions? Though this “un-cruise” at first blush costs significantly more than a major cruise ship, in the end, they don’t because you aren’t paying for pricey excursions that can double or even triple your cost.

Nor would you get these kinds of opportunities. Last night a group camped so that they could experience camping in the Alaska wilderness. “It was fun,” 12-year-old Miller Sinyard reported, even if the crew forgot the graham crackers for the s’mores. “We almost saw a bear,” he said. “I kind of wish we had.”

There were three multigenerational families on board — two youngsters, including Miller, traveling just with their grandparents. Miller’s grandma, Carol Harrison, a 67-year-old widow from Georgia, brought Miller along with her son Todd and daughter-in-law Becky on her first “big” trip since her husband died several years ago. “I wanted Miller to not be too old to do a trip with me but old enough to do everything and I didn’t want the parties and the crowds of the big ship. That isn’t what this is about.” The trip was such a success, she said, she’s going to get her passport renewed now.

We’re also traveling with extended family that has always wanted to explore Alaska and a trip like this certainly gives families plenty of time to share experiences and make memories, as long as you don’t mind giving up creature comforts.

Our cabin is tiny with barely room to get around the bed. The bathroom is a combo unit for shower and toilet with just enough room to turn around in. The food is plentiful, served buffet style, though we wished for more diverse menu options. (It seemed there was a mistake in ordering before our trip.)

(For those who crave more luxury with their adventures, the company has a more upscale line — American Safari Cruises. You can even charter an entire yacht for your gang. Check out the trips to Mexico and Hawaii in winter and special “Kids in Nature” sailings during summer in Alaska and spring break in Hawaii and Mexico.)

We don’t spend much time in our cabin anyway. We’re here to see the “real” Southeast Alaska, and we get what we came for — dozens of whales as we cruise in Frederick Sound near Turnabout Island. They’re here for the summer, eating 20 hours a day before they head to Hawaii for the winter.

A newborn seal pup and its mom float along on a chunk of ice and an eagle flies overhead as we venture out in a skiff driven by Capt. Quinn. We’re off to explore the Dawes Glacier in what is called Endicott Arm and spot a mountain goat with its kid near one of the waterfalls.

Some of the cliffs are 1,000-feet high. Yes, it is true that Glacier Bay is more famous — probably because that’s where all the big cruise ships go — but this place is spectacular and intimate.

We hear the glaciers calve — Crack! Boom! — and I understand why the native Tlingit people called glaciers “white thunder.” The glacier looks like blue cotton candy with chocolate sprinkles. In reality, it is more than 360-feet high and at least as much below the surface, Capt. Quinn tells us.

John Muir, founder of the Sierra Club, visited here and called this a “Wild Unfinished Yosemite,” and the high rock face certainly is reminiscent of that.

I wouldn’t have thought this trip would have been easy for someone with special challenges but Kirsty Digger, a nursing professor from the East Coast who uses crutches and a wheelchair, said she was able to see a lot of Alaska from this vantage point, especially in the kayaks and skiffs that loaded right from the boat. “I didn’t think I would be able to see as much of Alaska on a big ship,” she explained.