On a hiking adventure in Switzerland – and getting here 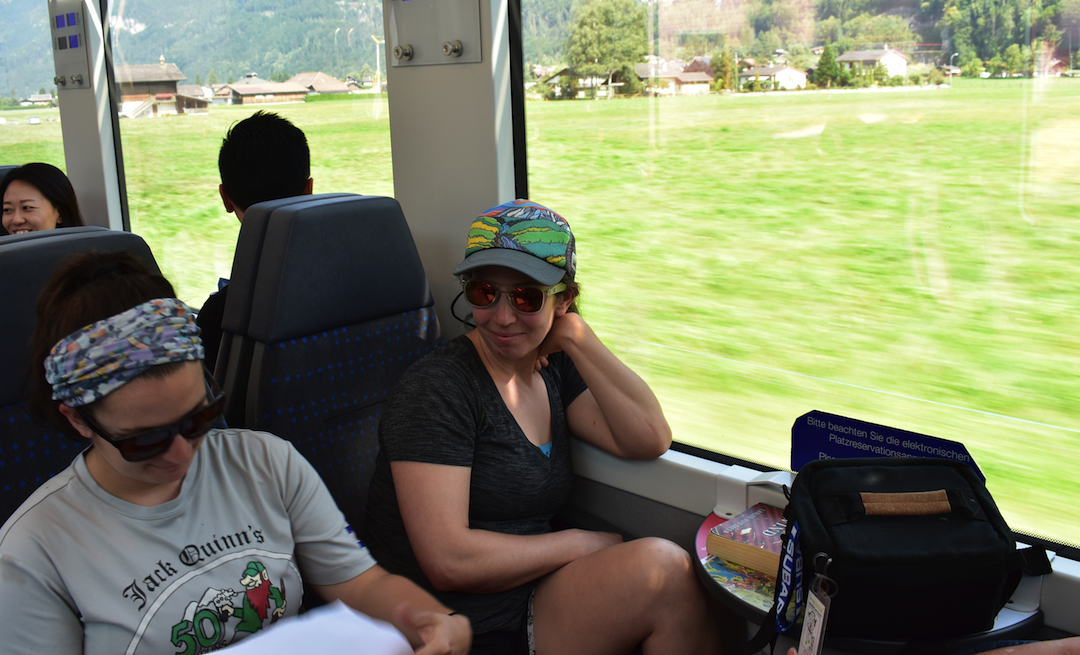 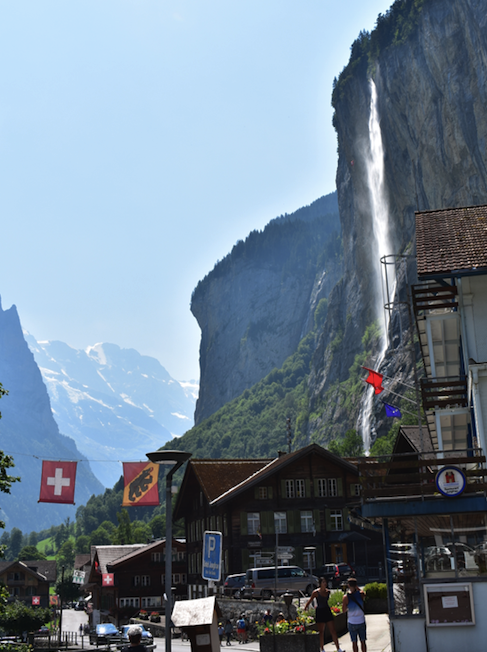 ZURICH, SWITZERLAND — It could have been worse. That sums up the average flight experience these days. The TSA Agent who pulled my husband aside at Denver International Airport for an extensive pat down and bag search because some mysterious and unidentified chemical supposedly was on his hands—they never found it and never told us what is might have been—could have refused to let him continue through security because he was asking questions.

The food on the Edelweiss flight—a subsidiary of Swiss Air that has just started non-stop service between Zurich and Denver, among other places, could have been far worse. It was fresh, hot and tasty and the smiling flight attendants brought seconds on hot rolls.

Still, I don’t think I’d take another 10-hour flight without springing for extra legroom.  We arrived tired and jet-lagged and more than an hour late but at least our bags were there and when we crossed the street to the airport transportation center, a smiling Swiss Rail guide offered our help to secure our train tickets to Lucerne where we would spend the night at the Ibis Styles, a short walk from the beautiful lake surrounded by craggy mountains, boats in the water and always entertaining swans and cygnets diving for food.

We have opted to spend two weeks on a self-guided hiking trip arranged by Alpenwild, the largest tour operator offering walking, hiking and trekking tours in the Alps. American Greg Witt, an adventure guide, founded the company more than 30 years ago. Today Alpenwild employs 23 guides and offers more than 50 tours throughout the Alps, mainly in Switzerland, France, Italy and Austria. Witt is the author of more than a dozen hiking adventure and travel books. 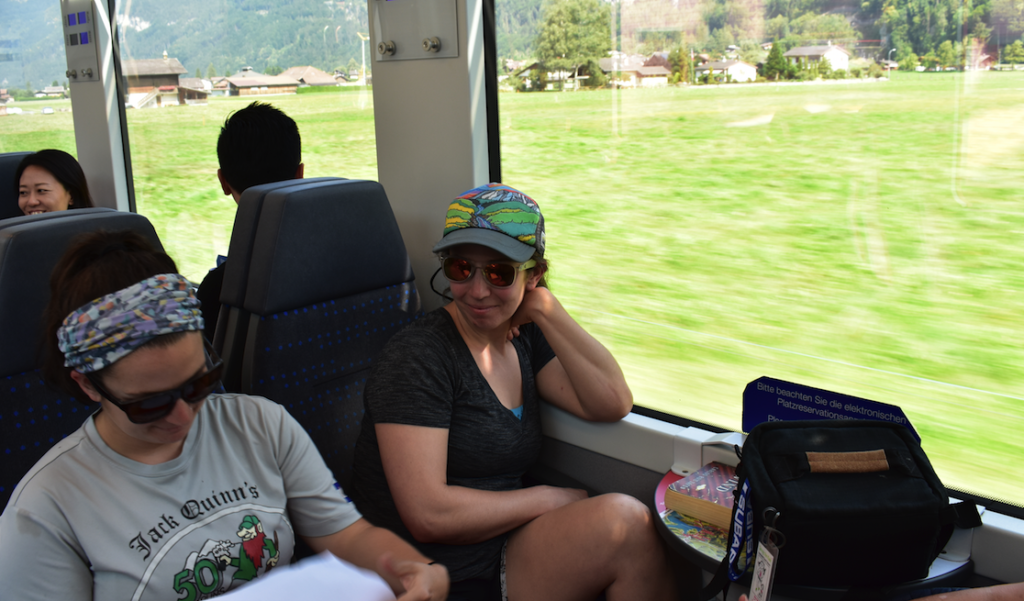 Our daughters Mel and Reg on the train ride to Lauterbrunnen

As my two grown daughters are along—both experienced hikers and backpackers—we opted for a self-guided trip which means Alpenwild arranged the itineraries and suggested routes and booked our Swiss Half Fare Card, which includes half off train travel, bus, boat on most mountain railway and public transport in more than 90 towns and cities (children under 16 travel free when a parent has a valid Swiss Travel System card with the Swiss Family Card). Alpenwild also made the hotel reservations and arranged for luggage transfers.

But rather than hiking with a group and a guide, we will be on our own, exploring the Matterhorn and the Eiger, past glacial lakes and fields of wildflowers and –weather permitting — the cog rail ascent to Europe’s highest railway station. Fully guided trips start at $2,995 for seven days. There are tours that are focused on food (hands-on cheese making in Gruyeres or artisan bread making), on chocolate, on J.R. Tolkein, who got his inspiration here and outdoor art lessons. There are also popular train rather than hiking tours.

The self guided tours like what we are doing start at $999 person. We were sent extensive directions, nearby emergency help, suggestions in each town for hiking routes, dinners and they are just a phone call away . 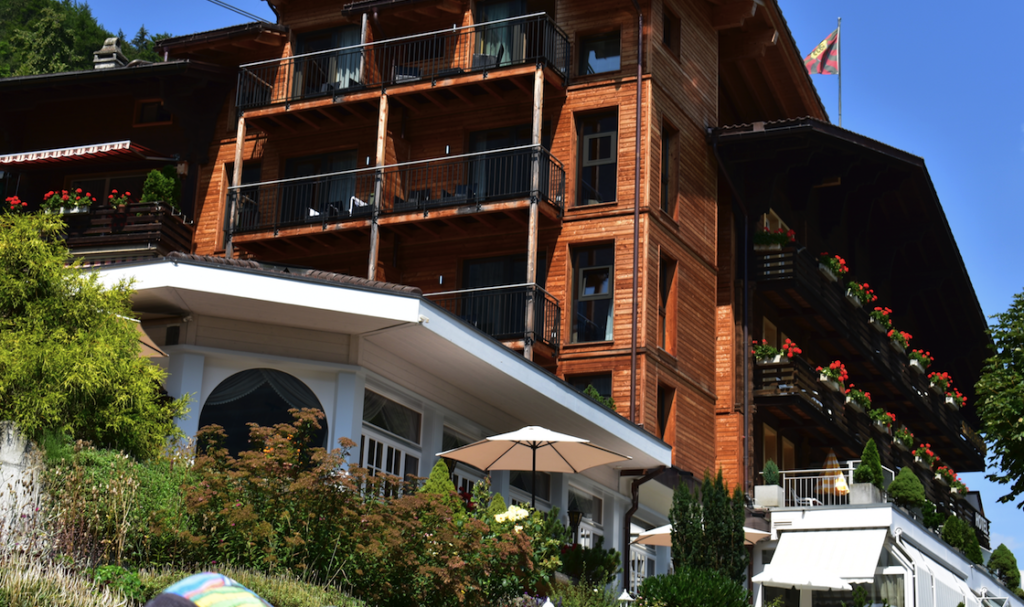 The Hotel Silberhorn in Lauterbrunnen Switzerland

Now as I write this, we have taken the train from Lucerne to Lauterbrunnen, a tiny Swiss mountain village about two and a half hours and a beautiful train ride from Lucerne and a gateway to this region. We are sitting outside the picturesque Hotel Silberhorn overlooking craggy mountain peaks and quintessential Swiss chalet houses with flower boxes bursting with blooms and bright green shutters.

This Jungfrau region offers a huge network of mountain rails and cableways that offer unparalleled access to the valleys of Lauterbrunnern and Grindelwald, including the cogwheel Jungrau Railway that first opened in 1912 and now shepherds more than a million tourists a year to Europe’s highest railways station (11,332.5 feet above sea level.

There is a tram from the town of Murren to Schilthorn complete with a Thrill Walk down into the mountain walls, a revolving restaurant called Piz Gloria and a Bond World interactive museum—this is where “On Her Majesty’s Secret Service” was filmed, famous for its action ski shots, toboggan chase and curling on the terrace where we walk.