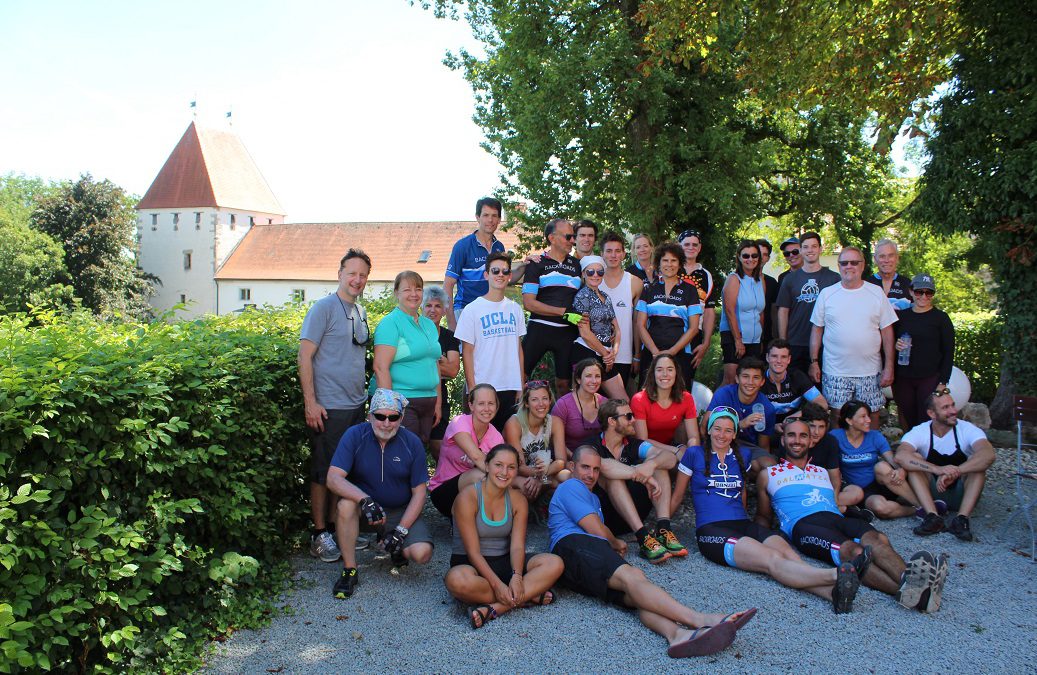 We could choose a 30-plus-mile cycling route that was hard (lots of hills!) or really, really hard (more climbing and more hills!) in Bavaria.

“This is what you’ve been training for all week,” said our always enthusiastic Backroads leader Evan Thompson. At least it wasn’t raining or 100 degrees. We’d cycled through both earlier in the week in Austria. I was struck that no one complained about any of it. In fact, those tough days added bragging rights to the trip.

“It seemed kind of mystical,” said Jacqueline Clemons, celebrating her 18th birthday on this rainy day. “It added to the adventure.”

“This was the first time I saw 30 people voluntarily bike in pouring rain,” observed my daughter Reggie Foldes.

Welcome to a Backroads Breakaway trip. Besides the biking, there are special walking tours in various cities and lunches in out-of-the-way local spots. For decades, Backroads has been a leader in active and adventure vacations, including those for families. Now that some of the families who enjoyed their trips cycling and hiking have older kids, the company has begun offering these Breakaway trips, capitalizing on the trend of grown or nearly grown kids continuing to travel with mom and dad. They are offering more of these trips in 2018 — everything from multi-sport trips to Croatia to heli-hiking in the Canadian Rockies to camping in Utah’s national parks — more than 200 trips in all. Consider that just six such trips were offered in 2014.

(Families and friends can put together their own groups too and with 10 people, it might turn out to be cheaper than a scheduled departure. (Mostly all-inclusive, trips start at under $2,000 per person and go up to more than $6,000. Price isn’t a deterrent, Backroads said, with bookings up more than 50 percent since these trips first launched.

There is something else unique about this trip. Rather than changing hotels every day or two, we are staying on the sparkling year-old AmaWaterways’ AmaStella river cruise ship as she floats up the Danube from Budapest to Vilshofen, Germany. On such a trip, it is possible for non-cycling family members to share the vacation — as one set of grandparents have, enjoying the ship’s complimentary excursions. We also could opt for their excursions, as I did one day (more about that in another column.)  Though among the most expensive offerings, there will be three AMA Waterways Breakaways trips next year, as well as three for those with younger kids. The company hopes to sell them all out.

Backroads takes us far afield to places we wouldn’t otherwise see — through orchards ripe with apples and pears in Austria’s Wachau Valley, past sunflower fields on Szentendre Island in Hungary famous for its artists’ village, crossing the Iron Curtain from Slovakia to Austria, and joining locals outside of Vienna on Danube Island, even jumping in the river on the hottest day. We return to the ship to relax and do laundry (luckily very inexpensive onboard) before dinner. (Read more about our adventure in my trip diaries at ttk-old.o2dev.net.)

We have two high schoolers, seven college and graduate students and four 20 and early thirtysomethings out of school and working among our group traveling with parents, including my daughter, Reggie, and her husband, Dan Foldes. They came from Atlanta and California, New Jersey and Connecticut, Washington state and Washington, D.C. Many had been on Backroads trips before, including a single dad traveling with his college-freshman daughter and a single mom with her 26-year-old daughter. Everyone gets along famously — even siblings.

“It’s better to have other people to be with rather than just my family,” explained Mark Sikand, 20.

“On a regular family vacation, we’d even be fighting about where we are eating,” said Jenna Bronfman, 18, who’s on her fourth Backroads family trip. “That doesn’t happen on a Backroads trip.”

There are also four adults who opted for this trip based on schedule. “The kids are great and add to the fun,” offered Ray Schupp.

“With five adults traveling, you have five people with different agendas going in different directions,” said Virginia Meyer, traveling with her husband and three sons aged 22, 24 and 26. “This is something we can all do together and everyone is happy.”

In Meyer’s case, that means using an electric bike (as are seven in our group) and opting for less rigorous rides, even hopping in the van to be able to photograph the group and the beautiful regions where we are cycling, while her husband and sons signed on for the toughest routes. They would all eat together on the boat.

And when we stay overnight in cities like Vienna, the younger generation heads into town for the evening, while the parents can relax onboard. “The best part with this age group is to have the option — they can explore the city at night and not get on a bike in the morning, if they don’t want to,” said Lynette Sikand, whose sons are college age and whose family opted for their second Backroads river cruise trip in two years.

But few miss the rides. Everyone bikes at their own pace with one leader at the head of the pack and one “sweeping” the back, with the van and Backroads support team always ready to pick up lost or tired bikers — as we were in Bratislava on a scorching hot day. (Thank goodness for mobile phones and Google maps to help them locate us!) Even with Garmins pre-programmed with the routes, as well as paper directions and maps, it is easy to take a wrong turn on a country road and get lost. “Happens every day,” cheerfully says our other veteran guide, Martina Quintana Madehim.

The last day, we cycled from Passau — a beautiful baroque city of some 50,000-people surrounded by the Danube and Vils rivers — to Neuberg Castle and back to Vilshofen where the ship awaited. There were a lot of big hills, as Thompson had said. The countryside is beautiful, with farms, horses, pumpkin patches. We can see the Alps in the distance and the Danube at various points along the way. The weather is cool — perfect for cycling.

We stop for lunch at the Hoftaferne Neuberg, overlooking a castle that dates back to medieval days.

“If I had planned this last day’s ride, my kids would have been yelling at me because of all the hills. Backroads takes all that stress away and I don’t have to worry about anything. We go where Backroads tells us. It’s a lot easier — and that’s what I want on vacation.”

As do all parents!