On Disney Magic — no one is Grumpy or Sleepy 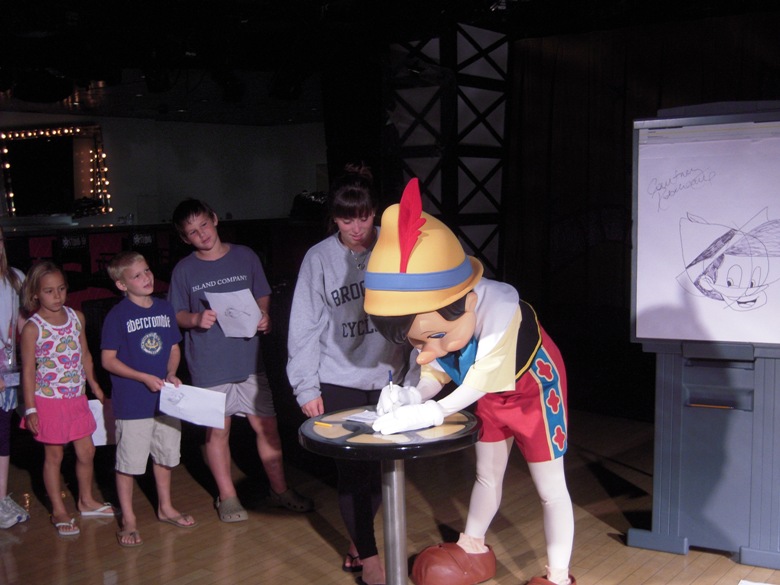 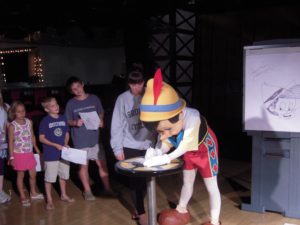 DAY THIRTEEN – Our last day aboard the Disney Magic (www.disneycruise.com).

“No one is grumpy or sleepy, I hope,” Snow White says to the mesmerized children—nearly 50 of them gathered on the floor in the Oceaneer Club.  They have just watched part of the Disney classic and  learned the “hi ho” dance in anticipation of Snow White’s visit.

“I’d love to tell you the story about how I met the dwarfs,” she says, as the kids listen attentively (every teacher should be so lucky!). “Once upon a time in a far away land…. Music comes up on cue.

Every day aboard the ship, there are at least two character programs, says youth activities manager Shannon Quinn, who oversees a team of 50 from around the world.  For example, across the way on deck 5 in the Oceaneer Lab, Goofy just left a group of kids working on a detective mystery trying to find the pixie dust.  Others are playing Wii on the giant screen while some are on the computers playing video games.

The youth programs have been shifted to be theme based rather than age based, she explained, so the kids three to 10 can join their siblings and cousins if they choose or simply choose what they’d like to do– make flubber or cookies, for example.

Activities are also themed to where we are at the moment–pizza making in Naples, for example, crepe making in France. They might make the leaning tower of Pisa or puppets.

Kids with special needs—whether mental or physical or severe food allergies are accommodated  too.

Downstairs in Ocean Quest on Deck 2, the tweens 11 to 13 year olds are alternatively playing a movie trivia game, computer games and driving the “simulator” that shows them what it would be like to be the ship’s officer at the bridge. There is a view of what those officers are seeing from the bridge too. Some 50 tweens seem happy and amused.  Other activities for this age group take place around the ship. There is a board at the entrance  that tells the kids what activities are going on there as well as around the ship.(Want to meet the Captain or play dodge ball on the sports deck?)

Teens have their own space The Stack at the top of the hip and I’ve heard varied reports. “The key is to go the first and second day to make friends,” says 16 year old Susannah Leeds, veteran of 10 Disney cruises. “A lot of us get bored in The Stack,” she explains, “You go there to make friends and meet people   If you don’t meet  people the first two days you will be uncomfortable the whole cruise.”

Youth Activities Manager Shannon Quinn says typically 85 per cent of the kids participate—obviously some more than others. Some parents complain in fact that their kids don’t want to leave the youth activities—they can even have lunch and dinner there—while other kids prefer to hang at the pool with their parents. Kids revel in the freedom aboard a cruise ship—much more than they have at home or on other vacations. (Kids eight and older may sign themselves out of youth activities, with parents’ permission; Teens can stay in The Stack with new friends until 2 a.m. and gather elsewhere after that).

The Cruise line has also initiated a new program parents will love in which those who have a late dinner seating (8:30 p.m.)  can tell their servers they kids want to “Dine N Play” which means they are served their main course right away and counselors meet them to take them to the children’s activities 45 minutes later, leaving parents to enjoy their meal without fidgety kids or having to get up and bring them to the kids’ program.

It’s those little things that make a trip like this memorable for a family and de-stress traveling with kids to unfamiliar ports. For example at breakfast—and this wouldn’t be a Disney ship without a character breakfast with MIckey, Minnie, Goofy and Chip and Dale making the rounds to take photos and sign autograph books, the waiters have fashioned hats for everyone out of napkins. Even parents are wearing turquoise and orange and yellow “hats,” snapping pictures of them.

Another plus of a Med cruise like this is that your kids will meet children from all over the world. As many as 50 percent of the passengers aren’t from the United States.

As we near the end of our 11 day voyage, I’m more convinced more than ever that there can’t be an easier way to introduce children to new cultures and new places. There’s no packing and unpacking every day, no navigating unfamiliar cities with bored kids, no trying to find them something they’ll eat on a menu in a foreign language.

They explore great sites and new places and return to “home” where everyone speaks their language, they can watch a Disney movie, meet up with friends and get a burger and fries.

“The best part was meeting new people and making new friends,” said Jennifer Davidson, 17, cruising with her aunt and cousin.”

“I wish I could stay on the ship forever,” says 14-year-old Miles Singer.

“The best vacation of my life,” declares 10 year old Francesca Boerio, who with her parents was part of the Adventures by Disney group on board  which spent the cruise together touring with a special itinerary and guides.

They have different favorite days – Miles loved being on the ship with his new friends. Other kids were awed by Rome or the chance to swim in the Med in Malta or visit a farm where they made pizza in Sorrento. The boys loved their “sword fight” at the Coliseum in Rome and the meals where they could eat anything they wanted.

Francesca’s   parents are keeping an eye on two of the other kids in the group at the character breakfast while their parents are elsewhere.” Adventures by Disney would be worth the extra price just for the special excursions and the meals,” said Francesca’s  father Joe Boerio, who is from northern California . “But then you add in the relationships. By the end, the families  have  really bonded.”

In fact, some are already talking about joining forces on another trip. Disney’s cruise to Alaska next year, perhaps.

We watch a slide show our guides have put together—they took 1700 photos of us–and laugh at our antics, just as we would watching with family. We trade emails and I even invite some new friends to Thanksgiving.

We’re all sad to say goodbye–really.