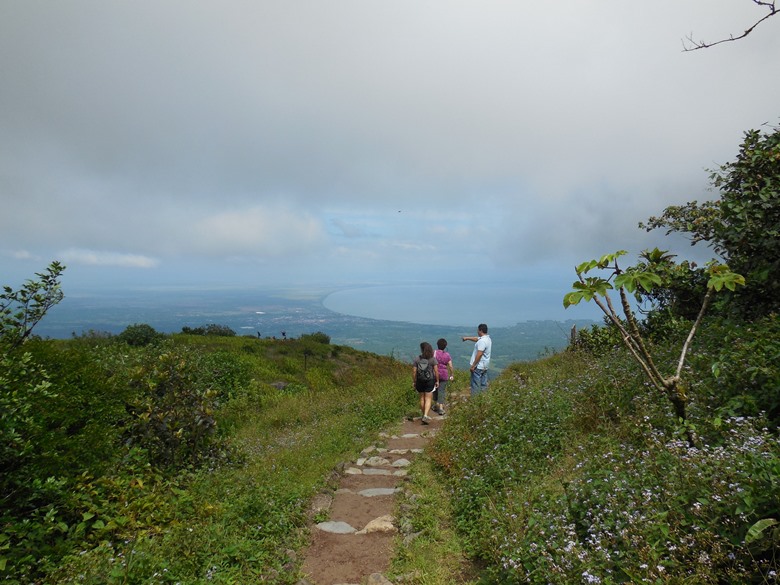 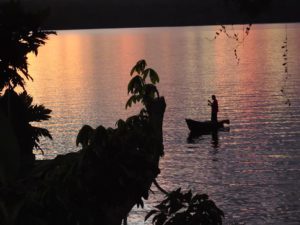 DAY 2 — Karen Emanuel came to Nicaragua on vacation. She left with an island — and a new dream.

Emanuel, a successful London executive, had come to Nicaragua in 2006 on the advice of friends who shared her passion for exploring new places, well before the largest country in Central America was on everyone’s bucket list of “must see” places.   Emanuel, pushing 40, fell in love — not with a guy (she met her husband later), but a country and an opportunity.

She visited Morgan’s Rock, a unique eco lodge on the Pacific Coast. And just as the owners of Morgan’s Rock, the Poncon family, had first been inspired to build an eco lodge in Nicaragua by a visit to a Costa Rica eco lodge, Emanuel was inspired by what she might accomplish on Lake Nicaragua.  “A new challenge,” she said.  Thus Jicaro Island Ecolodge was born.

So Emanuel bought herself an island—one of many in Lake Nicaragua—and hired the Poncon’s architect and construction company, who had built Morgan’s Rock a few years before.  The wood came from the tree farm of the Poncon family which is also home to Morgan’s Rock. 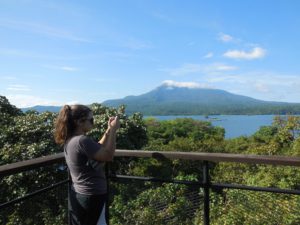 She wanted to build an eco lodge with the little luxuries she appreciated on vacation—good food, a good bar, bathrobes, yoga classes—and just as important, the sustainable practices she believed in, from locally sourced food to supporting a local school and those who create handicrafts.

The 2008 crash interfered with her dream; and promised funding didn’t come through but Emanuel didn’t give up.  “When the crash happened, I took a look at my other investments and thought they were losing value,” she explained. Jicaro opened in 2010. 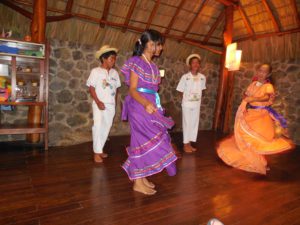 Today, the lodge attracts couples like Erica and Neal Agran of Chicago looking for a unique romantic escape, as well as families like ours with older kids (no children under 12) because there is so much adventure nearby.  Check out the blog post that Erica Agran wrote about their experience—all the better because they had won the stay in a raffle for Passports with Purpose designed by travel bloggers to give back to the places they’ve visited.

“I can’t think of another place like this that is so remote and so easy to see so much,” said Neil Agran.

We took a four wheel drive up to the top the Mombacho Volcano—some 3,600 feet (some opt to hike up the entire way) and walked around the crater—some 700 steps, more uphill than down with a guide pointing out a howler monkey in the tree, a two-toed sloth and all varieties of flowers and plants—orchids , birds of paradise, poisonous plants and others used to cure headaches and tooth pain.  We peer into a fumarole still steaming and a tiny canyon.  I’d never seen ferns with thorns before “The monkeys know to stay away from them because the thorns are poisonous,” the guide, Oscar Lopez, tells us.  This is the second most visited volcano in Nicaragua, known as the country of Lakes and Volcanoes because  of the chain of  50 volcanoes (seven are considered active; Mombacho is not) that run from the north to south.

The most visited is Masaya, because you can drive right up to the crater.  Our daughter climbed the two volcanoes on Ometepe Island—Concepcion and Maderas. 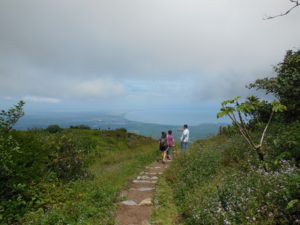 We pass one tree that has 35 species living in it, and palms that are used for ropes.  There are 150 varieties of orchids, we learn.

Other Jicaro guests have gone into Granada, stopping to see a cigar maker at work, gone out on Lake Nicaragua in kayaks and on paddle boards, to swim in a hot spring or zip lining.  “You can do as little or as much as you want,” says Emanuel.

The food couldn’t be better — fish from the neighboring islettas, local vegetables and fruits. Last night we were served a typical Nicaraguan menu with chicken stew, pork, rice and beans, tortillas, cabbage and carrot slaw and rice pudding for desert. Delicious!

It’s been a while since I’ve seen so many things on a menu I want to eat—gazpacho or pulled chicken sandwich for lunch?  Chimichurri steak, fresh fish with orange sauce or chicken cooked with local rum for dinner.  There are freshly fried plantain chips; the salads with local organic cheese.  “The few things that aren’t local are the yoga mats and the tea which is from England,” Emanuel says.

The resort “walks the walk” supporting locals, including a local school, whose 12-year-olds perform a dance for us one night before dinner.

Forty per cent of people here live in poverty, and Emanuel hopes she is doing her part, not only by employing her 30-person staff, supporting local farmers and doing what she can to change people’s perceptions about this country.

When she first told friends about Nicaragua,  “People would say they thought it was dangerous…”  Now people say ‘I’ve always wanted to go there.’”

The resort, she says, is now self-sustaining, but not making her wealthy. That was never the idea, she said.

She introduces us to another woman inspired to buy an island herself with the aims of building another eco lodge on the lake.

Even a small place like this can make a difference, Emanuel believes.

Just as important—or perhaps more so,  “Dreams can come true…you can do  it.”