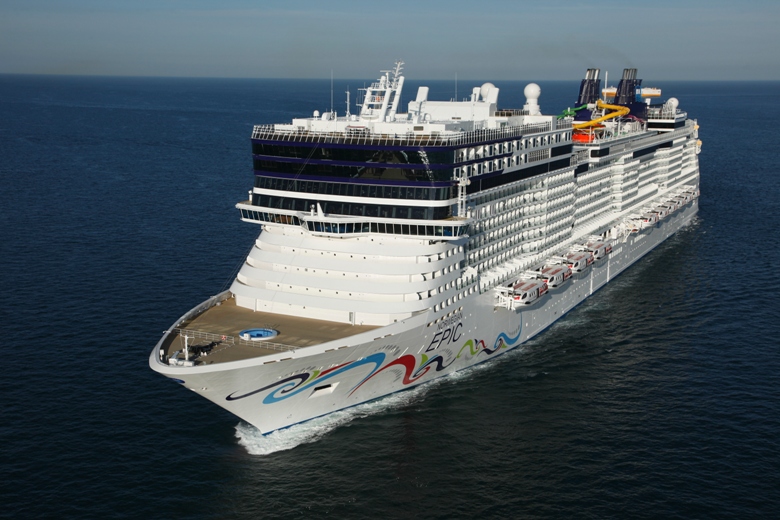 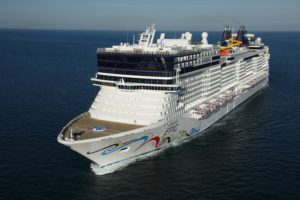 Ready to get slimed?

The kids can’t wait. We’re aboard Norwegians new megaship Epic (153,000 tons!) that has forged a partnership with Nickelodeon that means kids—and their parents-have the chance to get slimed, get up close and personal with SpongeBob, Patrick Star, Dora the Explorer, Diego and Jimmy Neutron at breakfast or “meet and greets.”

On the pool deck of Epic (http://www.epic.ncl.com/ ), kids are lining up to be chosen to play the games Can you recite a tongue twister in five seconds?  How many whip cream pies can you smash on the grown up’s butt.

Winners of various challengers were alternately soaked with a water balloon and then ultimately slimed. The kids—and the grownups in the crowd loved it.

They loved the breakfast too (which incidentally costs $10 extra for kids and $15 for adults.) Even 12 year old Patricia Riester and her 14 year old brother Clark were having fun along with their two younger brothers and said the fact that their dad is a Norwegian executive had nothing to do with it. “I love SpongeBob,” declared Patricia.

There is Nickelodeon presence on NCL’s private island Stirrup Cay and while the programming so far is just on the NCL Jewel and now Epic, cruise line officials expect the partnership to expand to the line’s  other ships with NICK-themed shore excursions (a little environmental  education  along with the fun) in the works.

The EPIC is all about entertainment—whether it’s Nickelodeon for families, the Blue Man Group, Second City improvisational comedy, Legends in Concert with impersonators of major stars like Elvis and Tina Turner and the only big top at sea- Cirque Dreams and Dinner—which is billed as an interactive theatrical dining experience with music and acrobatics.(also an extra charge $15-$20).

Cirque, I confess, left me and others in the audience cold–while the acrobatics were great, the “schtick” was not and went on far too long. The food was mediocre and, be forewarned, if you take your kids, they may not understand the show and complain it lasts too long—over two hours.

But that said, there is a lot to recommend the new Epic for families and that is just what Norwegian hopes.  “The family market is huge for cruise lines and when you build the family market, you are building the future. We want these kids to return with their families someday,” said Richard Kilman, who oversees entertainment for the cruise line. He notes that on Epic, the major shows—especially before the late night presentations—are all family-friendly.  The specialty restaurants—there are many–offer kids pricing when there is a cover charge.

Teens will be happy that the Entourage teen center is located two decks away from the expansive Recess kids club for younger kids. And great efforts have been made to identify the best counselors for the teen crowd notes Richard Ambrose, who oversees youth programming for the cruise line. “They are young, hip and laid back,” he explains.

But like the rest of the youth counselors on board—expected to be 25—also have backgrounds in education or recreation, have undergone background checks and CPR training and come from around the world—South Africa, Mexico, Peru, Britain, Canada, the United States  St Lucia, among them. “We even have MBAS,” says Ambrose proudly.

A word about the youth facilities—at 7,000 square feet—Recess is 2.5 times as large as on other NCL ships, Ambrose says.  There is plenty of place for the littlest cruises (the program will take kids as young as two as long as they are potty trained) to run and jump, climb through play spaces, for their older brothers and sisters to play the latest Play Station 3 games, Wii and more. “Sometimes my brothers are annoying and it is nice to be able to get away from them,” says 12 year old Patricia Riester, who is fan of the separate spaces for different aged kids for that reason. Parents whose kids have special challenges will be glad that NCL welcomes all kids and hosts those with special needs every week in their programs  Ambrose says. Ditto for those with severe food allergies.

But on this ship, says Ambrose, there’re is a new emphasis on “family” activities the family can do together—whether tee shirt paining, pizza making, NICK games, the shows or family trivia games or the spa where there are Mother/Daughter Paradise Massages or Father/Son Chill Out Massage ($195) as well as an array of other Teen and kid treatments. (Fabulously Fruity Facial maybe?)

Ambrose notes that 30-35 per cent of NCL’s  passengers typically are families and the feedback the cruise line gets is they want to spend time together as well as have adult time.

That’s evident in the most luxurious accommodations the Villa Suites complex that boast two-bedroom two bath  suites in the largest suite complex at sea with its own pool, sauna, gym, restaurant and more.  They sell out first on the ship, in fact, executives say.

But be forewarned that if you come aboard with your tweens or teens –and they are expecting 900-1000 kids on their Caribbean voyages–may not want to spend too much time with you. That’s because they have their choice of three mega water slides in the Aqua Park. There is a shaded water play area for young kids too) , climbing walls and even bowling and ice skating.

Just watch out for those water balloons.