On the road again — exploring America in an RV 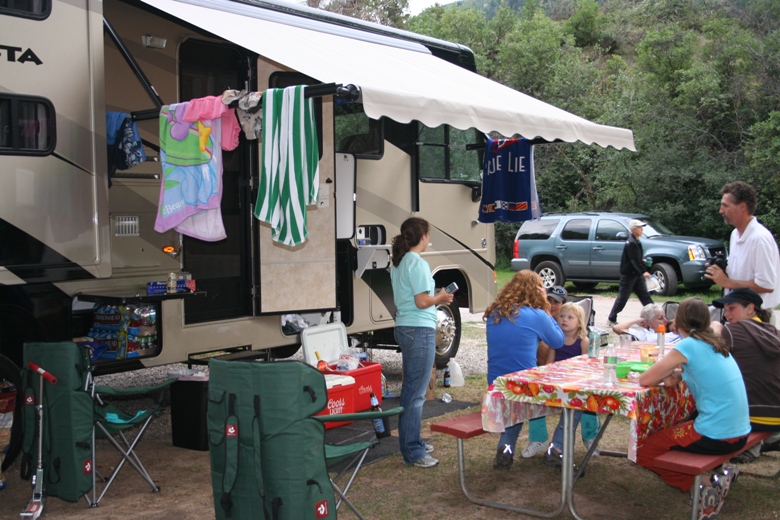 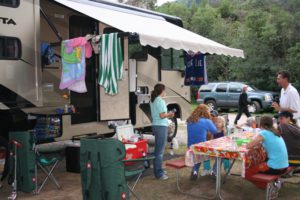 Our home away from home in an RV last summer

Call me a wuus but when it was time for bed in the campground, I was glad for a bed and the AC.

That’s right, we cozied up with the kids in an RV rather than a tent and boy was I glad.

Erica and Daniel Mueller knew exactly how I felt. The Denver couple loved to camp—until they tried it with their two young kids. “It took so much time to pack and unpack and we were spending all of our time doing that instead of relaxing,” said Erica Mueller, an engineer.

“You could never clean up the tent,” added Daniel, also an engineer.

So last summer,  the Denver couple bought a small RV. They were happily parked next to us at the KOA campground outside of Ouray, Co. next to a bubbling brook. Daniel Mueller was swinging in a hammock; Erica reading a magazine while four year old Sam and six year old Bella played.

RVing may not be for die hard backpackers like my grown kids, but it’s still a great way to get kids outdoors and get some R&R. You don’t have to worry about what to do when it rains either.  Sure gas prices are high, but some families park their RV in one spot rather than touring the region. What a great way to explore one part of the state or one national park,  returning to the camp ground in the evening where you’ll find congenial neighbors, activities, Wi-Fi in many places and even swimming pools.

“In a hotel you take them from a house to another room. What fun is that?” said Heather Shambarger, touring Colorado  in an RV with her husband and four kids. “How can you experience the outdoors from a hotel room? Heather Shambarger asks.

Just as important, Jamie Shambarger said, pointing at his kids happily playing in the playground at the Ouray KOA Kampground, are the instant friends they make. Parents too.  That never happens in a hotel, the Shambergers say.  “And I’m not apologizing 400 times in a restaurant for their behavior,” he joked.

“At a hotel, instead of being together, the kids are glued to the TV,” added Jody Schreck who is from Jefferson Iowa and celebrating her parents 50th anniversary with a combination of tents, RV and campers.  “This is full frontal togetherness. She added it was much easier to keep all the kids entertained in the RV too.

The RV industry, which celebrated its 100th anniversary last year, estimates  there are as many as 30 million RV enthusiasts on the roads today. And while we think of RVers as retirees, the reality is that more recreational vehicles are owned by those between the ages of 35 and 54 and many others are renting (pop up campers can be had for less than $100 a night) not only because it can be an economical way to travel with the kids but  because they’d rather have a campground experience.

“You are still sitting around the campfire whether you have an RV behind you or a tent,” said Tom Garland, a dedicated family RVer,  and Colorado RV park owner, along with his wife, Mari.

With kids who have allergies and asthma, adds Erica Mueller, having a stove and electricity is no small thing either. And then there’s the luxury of a shower. “Sun showers with cold water didn’t do it for little kids,” she laughed.   Nor is  it fun to stumble out of the tent in the middle of  the night looking for the bathroom for kids who have to go “NOW!”

Even our trip from Denver in our borrowed Winnebago was fun. “The most awesome day of my life,” declared 7 year old Ethan as we left, who pronounced the RV “so much funner” than riding in the car. Here, though he is still buckled in a seatbelt, he can alternatively play games (Operation Shrek this morning), play video games or watch a movie on his iPod when we sit around a table. When he’s hungry, his mom gets him yoghurt from the fridge. The best part he declares, he doesn’t have to wait for his dad to stop if he has to go to the bathroom.

Five your old Hannah, meanwhile, was happily coloring—deeming the bumps a challenge to her picture. Not exactly an old fashioned camping trip but an outdoor adventure just the same.

Everything, in fact, is an adventure for the kids–the bunks with curtains they can close (and individual DVD players),  the campgrounds where they can play on the playground or tool around on their scooters.

When everyone got hungry, we pulled over and had a picnic. “So much easier than taking them to a restaurant,” said their mom Jayme. Healthier than fast food and cheaper too.  After a couple of hours at the Ouray pool with water so warm it felt like a bath, we settled in to our home for the night, where we made burgers and brats for the family traveling in tandem—some in tents at the same camp ground, some at a hotel in town. We ended the night with smores—making one after another until the chocolate ran out.

“True camping with kids was more work than it was worth,” said Erica Mueller, acknowledging. “This is a compromise. It gets the kids away from TV and the computer and outdoors with a lot less work for us.”

And let’s not forget the AC. Pass the marshmallows please.