On the Southern Ocean, Dissecting a Squid is What You Do 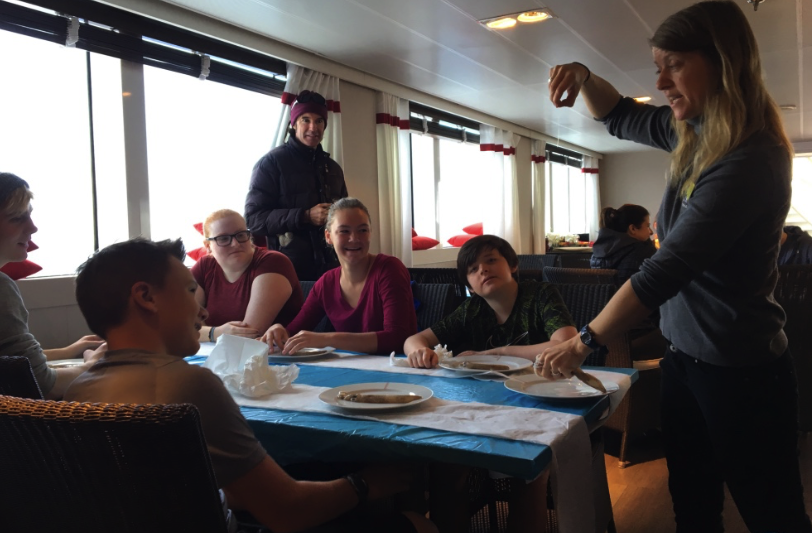 ABOARD LE BOREAL (DAY 3) — Who is brave enough to kiss a squid?

“You’ll be grossed out but you can do it because you are scientists and explorers,” says Jeff Manker, a high school science teacher who is one of the two Young Explorer leaders on board Le Boreal as we head from the Falkland Islands to South Georgia with Abercrombie & Kent expeditions.

This morning, as the Southern Ocean rocks the boat with waves 10 or more feet high, the kids have gathered in a corner of the sixth floor restaurant to dissect a squid.

Yes, it’s school vacation but more than two dozen have turned up, including several teens and a 20 year-old who said he was interested as Young Explorer leader Kristin Wornson showed them step by step, only a few refusing to touch the slimy squid. “If I had gloves I would,” said Marcos, 12, a bit disconcerted that his younger sister Maya, 10, was perfectly willing to get her hands dirty.

The kids learn how to “write” with the back cartilage-like material that looks like a quill pen, using the squid ink and how to tell a male from a female.

By “kissing” the top, the body blows up “like a balloon,” one kid said.

The 34 kids on board and their families are emblematic of travel trends here and around the world. Families are traveling to exotic locales with their children, not waiting to take bucket list trips. There are Chinese families on board, including a 25 year old medical student studying in Phoenix who is traveling with his mom who has always wanted to visit Antarctica, said Fan Wang.

The Kings, from Nashville, in fact, are taking an entire gap year with their three sons — 19 year-old twins — and a 13 year old-to travel. Wes King, a song writer and producer, said surviving cancer several years ago and seeing how busy his twins’ high school years were made him and his wife Fran want to take time to “be together as a family… Travel makes you closer,” he said.

Paul Brocchini, who at 81 has the privilege of as he puts it “being the oldest dude aboard,” is traveling solo with his granddaughter Lena Sundin, 12 – a tradition, he said that began with his wife Nellie’s grandmother and one he has continued. Lena’s is the fifth—and most expensive—trip, he says. There is one grandchild to go, “As I get older, I’m freer with my money,” he jokes, adding that “It is a real treat,” to have each grandchild one-on-one to share a once in a life time experience.

The Beals, like other families, have decided experience is a far better gift to their daughters than “more stuff,” but in their case, the decision to give the gift of travel for Christmas was inspired by Sydney, 21, and Kyndall, 18, their mom Kay said. “Money well spent and much better than a shopping spree,” said Kay Beal, who lives in Minneapolis.

Of course this trip to Antarctica is way beyond most families’ budgets and wildest dreams. Nor would everyone choose to come to an ice covered continent as a dream destination. “People were asking why we wanted to come to Antarctica,” said Raul Gutierrez, traveling with his wife Yana and daughter Maya, and Marcos. The New Jersey couple traveled widely before they had kids — Raul in fact proposed to Yana at the summit of Mount Kilimanjaro — and now that the kids are old enough, are taking them far afield of the typical family destinations — China and Africa, among them. “I want them to be exposed to other cultures and to see that the world is bigger than their world in the U.S.” Janna Gutierrez explained.

Those on board have already been to many “dream” destinations — Paris and Rome, the Galapagos Islands and African Safaris. They came precisely because Antarctica is so remote and teeming with fantastic wildlife — a place only some 40,000 people are privileged to visit each year on expeditions that are rigidly controlled by environmental rules.

There is a honeymooning gay couple from St. Louis, and several 20 and 30-somethings traveling with their parents — another new trend. Once Ellyn Lindsay retired from her job as a federal prosecutor, and after nursing her ailing mom, the 57-year-old LA lawyer explained “I decided we had to live our lives — travel was a big piece of that. Since this trip was over the holidays, she and her husband Bill invited their daughter and son, both in their mid 20s, and their daughter’s partner. “A lot of people our age have issues with their parents,” she said. “We really like our kids as adult and it is really fun to spend time with them. This trip is priceless.”

So was her daughter Katie’s appreciative smile.

On to the penguin colonies!