One last stop — and beautiful and historic island of Moorea 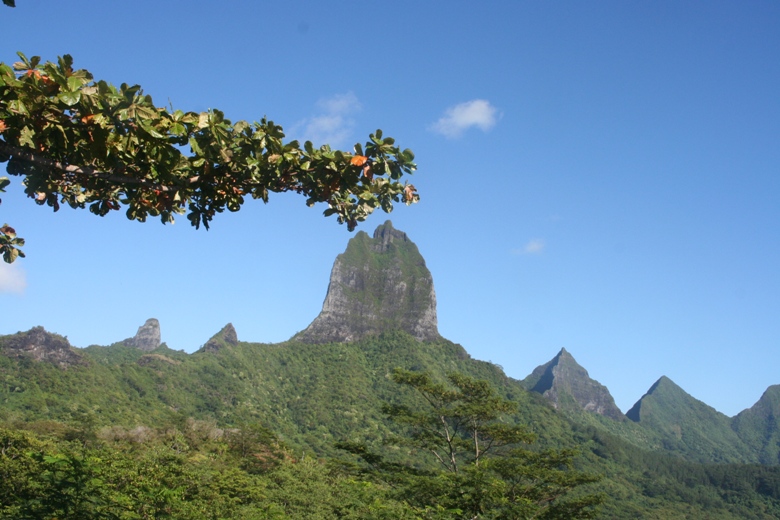 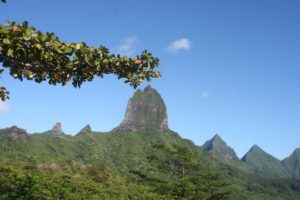 the peaks on Moorea in French Polynesia

We hopped a short flight from Bora Bora to the French Polynesian island of Moorea that is spectacularly beautiful with its crystal clear lagoon and the green cliffs. This island is known less for its manicured resorts than for what there is to do here — taking a hike, passing by ancient marae (ancient temples excavated by archeologists), checking out the spinner dolphins and humpback whales, playing with the stingrays in the crystal clear water.

Click: PHOTO GALLERY The island is an extinct volcano, explains Frank Murphy. Murphy, who is associate director of the University of California Berkley’s research station here. He has also partnered with his friend Paul Sloan to create Tahiti Expeditions (www.tahitiexpeditions.com) to introduce visitors like us to the natural wonders of French Polynesia.

“There is a lot more here than over water bungalows and nice hotels Sloan explains. Both Sloan and Murphy are married to local women and are raising children here in paradise. Lucky guys!

Murphy explains that the geography itself is more dramatic here on Moorea than Bora Bora — more peaks and valleys. Many people come over on the fast ferry from Papeete for the day from the big island of Tahiti. Many people here commute to Papeete for work too — but they are missing a lot, we think.

We’re ensconced in a brand new kind of resort for the islands — The Legends Resort (www.legendsresort.fr). Its spacious villas are perched on stilts up the hill from the Intercontinental Hotel with spectacular views of the lagoon. The spacious villas can sleep six comfortably and the kitchen (all brand new!) saves big bucks on food. There’s a private shuttle service to a private motu to lounge on the beach, a pool here, and one of French Polynesia’s best restaurants at the bottom the hill with desserts to die for (raspberry soufflé?)

James Cook’s final voyage — before he was killed in Hawaii in the late 1770s, included a stop on Moorea. But he never anchored in the bay that today is called Cook’s Bay, Sloan tells us, pointing to the area on Opunuhu Bay where cook anchored, reprovisioning and getting into a famous altercation with a local accused of stealing his goats. When Cook was here, Sloan continues, the population was 45,000. Today, it is maybe a third of that.

We hike through the forest in the Opunuhu Valley, imagining what it must have been like 1500 years ago when the valley was teeming with activity and Tahitians lived and farm here. Murphy stops at a rectangle of rocks. “This was the house,” he said. We try to imagine a farm here — more sun, fewer trees, spectacular views of the bay, terraced fields of bananas, taro, breadfruit. A nice life!

We hike further till we come to a Marae — a kind of individual family temple. They typically pointed toward the mountain, Murphy explains, and each family had one. The custom was to stash the ancestors’ bones somewhere nearby in a special box and then bring them out for special ceremonies. The girls aren’t sure they like that idea!

The night before, we learned a little more about local culture when we visited Tiki Village (www.clubbalihai.com) hotel that was built by the “Bali Hai” boys who came down here in the 1960s from Southern California. Two still live on the island.

After lunch, we head out in a Zodiac on the hunt for spinner dolphins. First, we stop for some fun in the water with the Sting Rays. There are dozens of them in the crystal clear water! While the girls don’t want to play, we parents jump out of the zodiac and swim with the rays. No tourists. No organized tours — just us and the big rays who don’t seem afraid of us in the least. From where we are anchored near Haru Point, we watch the expert kite surfers. The make it look so easy! The girls look on jealously, remembering their taste of the sport on Bora Bora.

But our mission isn’t complete until we find the elusive spinner dolphins, which at about 5 feet-long are smaller than most of their cousins. Murphy explains that they “sleep” during the day, swimming in tight pools in late afternoon before they go out to the ocean at night to feed. There they are, swimming just under the surface.

Our patience is rewarded. They jump — just for us, no doubt! Kind of like a baby who rewards you with a smile. We hate to leave them but it is almost sunset.

The end of another perfect day in paradise.

The next morning we pack up and head for the airport for the trip home. On the drive around Moorea we stop at several shops for last-minute souvenirs. And from the back of our mini-van, rented from Avis, the four teen-aged girls serenade us with songs they learned many years ago at Camp Kamaji (www.kamaji.com) in the Minnesota North Woods.