Our last day on the catamaran with Turo 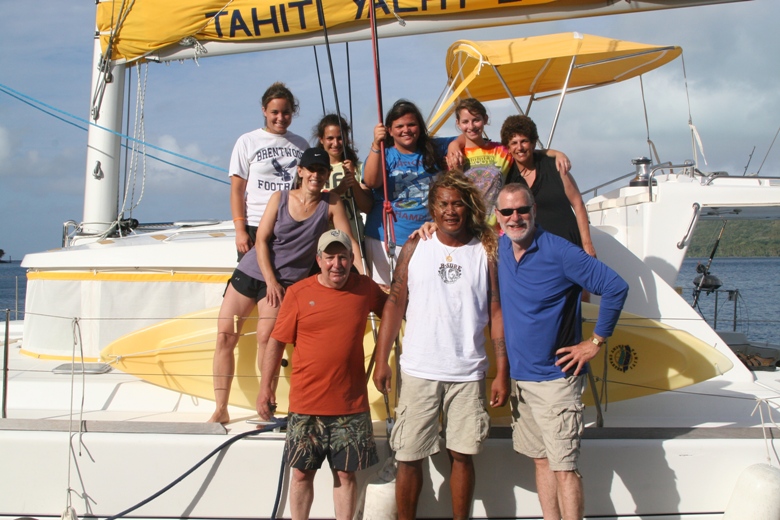 Our group says goodbye to Turo and the catamaran

DAY 8 — Sad! It’s our last day on our Catamaran with our captain Turo Aritu, who for the past week has regaled the girls — and all of us — with his tales (mostly in French) of his four sons with four different women who now live around the world. He doesn’t believe in marriage, he tells us, as there was no such thing as marriage in these islands before the Europeans came.

Turo also is well known among the islanders as a master sailor and has won many competitions. In fact, as we traveled from Raitea, where we pick up the charter boat from Tahiti Yacht Charters (http://www.tahitiyachtcharter.com/articles.php )to the island of Huahine, to Ta’Ha and last to Bora Bora ,we seem to meet his friends and cousins everywhere we stop. Pretty soon we’re all trying to outdo each other asking locals: “Do you know Turo?” “Of course, he is my great friend,” is the usual response.

Click: PHOTO GALLERY
We couldn’t have had the adventures we’ve had either — catching a 16-foot Mahi Mahi that he cleaned and grilled for dinner, attracting the reef sharks with what he tosses in the ocean. He takes us to the most spectacular snorkeling spots I’ve ever seen and another place where we swim with sting rays, their long tails flapping.

But mostly we just enjoy having him on board. He doesn’t speak much English, which encourages my daughter Mel to practice her high school French. He keeps teasing the four 18 year olds about taking them to a discotheque, which of course is nonexistent. My husband Andy introduces him to martinis – he , in turn, jokes about how Russians he has skippered for prefer “Wodka.” He smiles and laughs at everything.

It’s rare — for me at least — to not be ready to leave a place when it’s time to go but that’s how I feel about Turo and our Catamaran. Never mind the pump toilets or the sailboat showers which require you to literally turn your tiny bathroom into a shower, the small quarters or the rocking of the boat.

What I’ll remember is sitting with Turo as he steers the boat or eating the fresh fish he has just cooked or watching the girls follow him, like he’s the pied piper as he leads them through the famous Coral Garden off the island Ta Ha, teasing them as he lifts a barracuda and puts it in his mouth.

Our last night, we take him to dinner at Bloody Mary’s Restaurant on Bora Bora (http://www.boraboraisland.com/bloodymarys/index.html ), the iconic restaurant with sand floors and thatched roof and rows and rows of celebrities’ names. We choose our dinner from the display of fresh fish and ribs as we walk in — should it be tuna or Mahi Mahi, local lobster or Wahoo teriyaki. The manager Craig Gould says Turo always orders the same thing – baby back ribs from the local pig population! He and the girls pose for silly pictures in front of some awesome Tikis.

Bloody Mary, of course was made famous in James Michener’s Tales of the South Pacific and later in the Broadway musical and movie as the woman who got the World War II sailors together with local girls. The woman who inspired the character, Gould tells us, is still alive.

Bora Bora , of course, was home temporarily to thousands of American sailors during World War 2 and their fondness for the islands first spurred tourism here. Today, Gould tells us, Bora Bora, like other tourism destinations is feeling the impact of the world economic crisis.

He gestures around the half-empty restaurant. “Usually we’d have lines outside,” he says. “Business is down 40 per cent.” We’re glad to be here and I think, maybe it is exactly the time for American families to come with kids’ fly free deals on Air Tahiti Nui (http://www.airtahitinui-usa.com/ )and tempting hotel offers. We chow down on our fish and coconut ice cream (homemade) for dessert.

I look at Turo at the end of the table laughing with our four newly minted high school graduates.

Later my daughter Mel gives me a hug. “Thanks mom for such an awesome trip,” she says.

It certainly is one for the memory books. We try to invite Turo for Thanksgiving. But somehow I don’t think he’ll make it. He prefers the islands, he’s told us. We hug goodbye.

Now it’s on to the next part of our adventure. Same for Turo.

Next: Romance and kids can go together