Souvenir shopping rule #1: don’t buy something you can buy at home 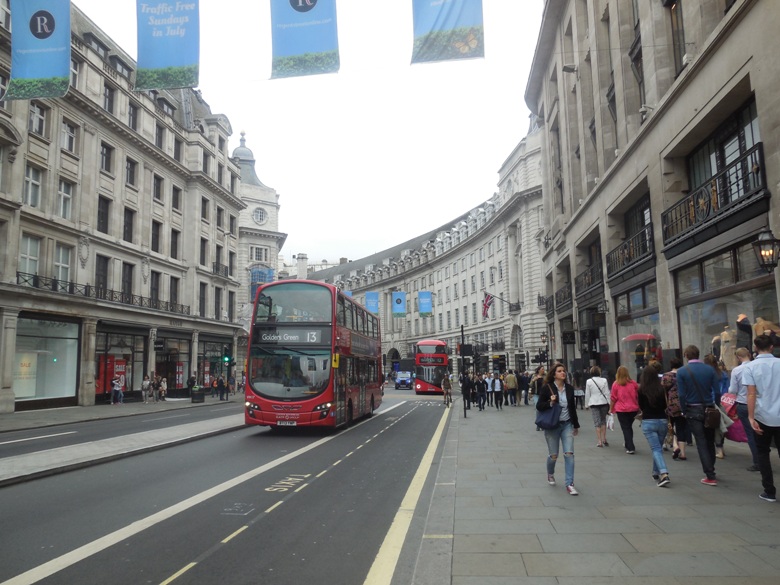 We’re in London on the mile-long Regent Street known worldwide as “the mile of style,” home to iconic British Brands like Burberry (the largest Burberry store in the world); Hamleys toys (7000 to choose from including the famous and cuddly Hamleys and Teddy bears); Hunter (famous for its rubber Wellingtons that come in silver in kid sizes, among other colors), and   Liberty whose  print patterns and scarves are synonymous with Britain in certain sets. Let’s not forget the East India Company with its tea blends like Heart of Persia, Rainforest or Darjeeling 1st Flush.

Stop in for a tasting—it’s free! No charge either to walk into Hamleys, where energetic young people are demonstrating toys while kids are trying out toys downstairs—

everything from mini-drones to  rolling hamsters. Here’s the place to buy a rubber band shooters, spy shades, tiny knights and of course, everything Harry Potter.

But just like Fifth Avenue in New York and the Champs Elyesee in Paris you can find plenty of global and American brands—Anthropoogie and J Crew, Clarks shoes  and Zara. A teenaged fashionista will be in shopping heaven—especially with Carnaby Street with its quirky brands a few streets away.

Sure London has lots of sites to see but there is something to be said for spending a morning wandering along with local families. Come on a Sunday in July when the street is closed to pedestrians. On our way back to our Covent Garden Hotel, One Aldwych, we walked smack into a large demonstration of people of all ages unhappy about the recent elections.  Sound familiar?

There is public art to be seen at Regent Street and hidden gems.  Anyone in your family a David Bowie fan? Check out the spot where David Bowie  made his 1972 Ziggy Stardust Album cover.  People come from all over the world to pose for selfies here.

London is famously a first stop for Americans venturing abroad—a top pick  this summer, according to AAA.  It’s different enough—those red double decker busses! The ancient buildings! The Queen!  But comfortable because everyone speaks English.

Want to shop like Duchess Kate? If you’ve got the bucks, GOAT on Regent Street is said to be one of her favorites.  She reportedly also is a fan of  Penhaligons   gardenia scent (Princess Dianna liked Bluebell). You have over 40 scents and aftershaves to choose from—and can even have your personal scent profile done.

Pop into Hackets menswear where you can have a gin and tonic while searching for a tie or shirt or getting measured for a made to order suit or shoes.