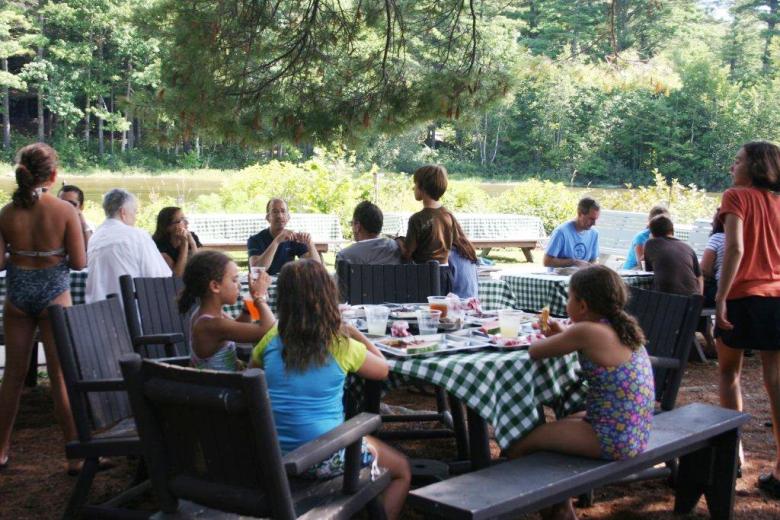 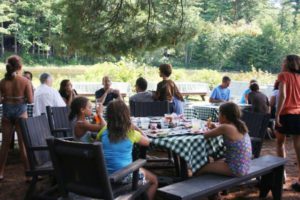 Summer camp sure wasn’t like this when I went. My kids either.

We troop to the lakefront, where, after cocktails, we’re served lobster and steamer clams, corn on the cob and corn bread, salad and strawberry short cake. We look out at Lake Sebago—Maine’s second largest—dotted with small islands. It is an exquisitely beautiful scene and oh-so-comfortable.

Welcome to Migis Lodge.  In a local Native American language Migis means “Place to Steal Away and Rest,” says Tim Porta, who is the second generation to run the place—his 29-year-old son Jed the third generation.

It reminds me of the family-run Ludlow’s Island Resort on Lake Vermillion in Minnesota where we went every summer when our kids were small and we lived in Chicago.  The kids would hunt frogs, fish from the dock and race from cabin to cabin without us worrying where they were..

This is a small resort too—just 35 cottages—at most, 150 guests. Like at Ludlow’s, families return here year after year and it is easy to see the appeal of such a place.  Kids line up for waterskiing, play checkers in the lodge in front of the fireplace and horseshoes at the lakefront.  There are some organized activities for the kids and an early children’s dinner so parents can enjoy a leisurely meal.

There’s no glitz or glam, just old-fashioned family time. Becca Bergman insists the quiet resort is anything but boring—even for a teen. “It is the right combination of being active and vegging out,” she explained.

Two other tweens from New York City said coming here year after year, “is the best part of summer

Sit on your cabin porch and read a book. Play Scrabble, kayak or canoe on the lake, swim in the lake to a nearby island (no pool here!), play golf or go hike up a mountain nearby. There’s plenty of shopping 45 minutes away at L.L. Bean and other outlet stores in Freeport, ME.

But “most people just put the keys in a drawer and don’t leave once they get here,” Tim Porta said. “We joke that they are getting ‘Migisized’.”

We could all use a place like that this summer to get unplugged with the kids, if only for a few days. Migis Lodge is not cheap—it could cost over $1000 a night for a family of four. But you are ensconced in a roomy, well appointed cabin (there are TVs but no phones), served three excellent meals —and nothing to worry about but how to enjoy yourself.

At night, kids—even those in diapers—are invited to the “zoo” an early kids’ dinner followed by entertainment or crafts so parents can relax.  “Even if kids eat with their parents, they are done in 10 minutes,” observes Jed Porta.

I don’t know why every resort doesn’t offer such an option—complimentary of course—or a complimentary kids’ program  for a few hours each day where the kids might make tie-dyed shirts one day or go fishing another soccer or swimming—just so parents and grandparents get a little guilt-free time to themselves to play tennis, get a massage, read a book or go out fishing.

Migis Lodge first opened in 1916 as a fishing camp ($2 per day all inclusive!).  Eight years later, Luther Gulick, who owned a boys summer camp (Timanous) and a girls’ camp (Wohelo) on the neighboring lakefront bought the place—to extend the camp experience to campers’ families. To this day, Porta said, families of campers and past campers going back three generations stay here.

In those early days, wealthy New Yorkers and Bostonians came via train and steamship, which stopped on the dock, settling in for a month at a stretch. In those early years, children under 14 were discouraged, as were those not of “Christian Persuasion.”

After another ownership change, Porta’s parents bought the place in 1968, making the resort more welcoming to all families and all faiths.  Tim and his wife—parents of five kids—took over ten years later.

Today more than 70 per cent of guests have been here before, many multigenerational families now spread across the country with grandparents picking up the tab to get everyone together. What a marvelous gift, I think, to give grandchildren—time with cousins and aunts and uncles and grandparents in a spot where they can run around, fish from the dock or kayak or water ski every morning.

Families today are far more active, of course.  Relaxation these days is having time to play tennis or exercise or take a hike. Their vacations are shorter.   But one thing hasn’t changed…The desire for unfettered time together.