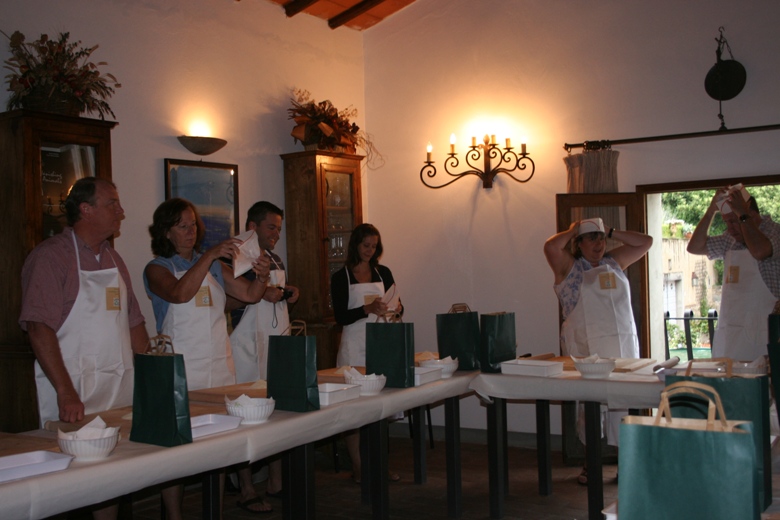 We’re at a restored picture-perfect farmhouse up in the hills of Lucca on the vineyard and olive groves that are owned by Piero Tartagini and Francesca Pardini, taking a cooking lesson from Zeela Rubenstein and her husband Mauro Gehigani who incidentally met at passport control in Peru and eventually married and had three children.

Many aboard the Disney Magic (www.disneycruise.com ) headed into Florence—a two-hour-plus bus ride–but we opted to stay in Tuscany. Lucca is a spectacular walled city with medieval walls so wide you can ride a bike or jog on top!  Great shopping too.

It is pouring rain outside and we’re glad  to be on a covered stone patio rather than slogging our way from museum to leather shop. I didn’t expect to see any kids here but the Brightmans, who are from Maryland, have their seven year old son and 14 year old daughter and the Collazos, from Chicago, their 18 year-old daughter and 16 year-old son. In fact, 18 year old Kayla—the cruise was her high school graduation gift—chose this excursion because she loves to cook.

Parker Brightman, 7, likes to help his mom, a gourmet cook, and his dad T.J. is a wine aficionado and the two go at the pasta making with gusto along with the rest of our group.

It is the love that we put in that will season our pasta, our cooking teacher says(www.cookingintoscana.it).

We take a break to see the olive oil operation while the dough chills and watch as Gehigani shows us how he seasons a pork roast (lots of garlic, olive oil, and fresh rosemary stuck in three finger sized holes in the meat).  Because of the weather, we can’t take a walk through the herb garden or the vineyards but we do taste the wine and olive oil. I’m disappointed the excursion doesn’t involve more actual cooking beyond pasta making but everyone else seems totally satisfied.

I’m struck again by how Disney manages to satisfy all ages—albeit at a price (this excursion is nearly $400 a person).

There are of course many ways to manage your time off the ship. I meet families like the Markeys who are traveling with a group of 11 and explain it is a lot cheaper to arrange their own excursions.

“We can do it on our own time,” said Doreen Messina, traveling with her grown daughters and husband from Rochester, NY to celebrate their 30th anniversary. “The driver is English speaking and they are very good about getting you back in time.”

Others like the Chalabis from Toronto prefer to do it all on their own. They took a taxi to the train (15 Euros) and the Train to Florence (18 Euros RT) and explored on their own—a long trip (2.5 hour train ride) for just a couple of hours in the city on their own. They did the same in Rome, purchasing Vatican tickets online in advance so that they didn’t have to wait.

The majority, though, like the Brightmans, prefer to pay the tab and have the cruise line do all the work for them.  “A great day,” T.J. Brightman said. “The kids are having a blast.”

Shore Excursions Manager Heath Stewart says some 50 per cent of passengers this cruise have opted for the cruise line’s shore excursions. There is built-in security: If you are late returning to the ship, the ship waits. If you go off on your own, you truly are on your own. “I’d rather let them do all the planning,” says Iris Montalvo who is traveling with her 17-year-old daughter Amanda to celebrate her high school graduation. They’ve opted for excursions at every port.

“We will know where you are at all times,” Stewart said.

Families more typically will do a port or two on their own, Stewart said. There are also options to “bundle” some of the most popular destinations, saving 30 per cent or to opt for ones that don’t include lunch (giving you more time on your own) for even more savings—a good bet with kids who don’t want to sit through a long lunch anyway. Some families are joining forces and booking “private” tours through the cruise line—a growing market, Stewart noted.

Unlike other cruise lines, Disney also offers children’s discounts on excursions and offers special excursions that include counselors from on board the ship—whether it is a family scavenger hunt through Herculaneum that was also buried by the volcano that destroyed Pompeii, a puppet show on a Rome excursion that also includes a visit to St Peter’s and the chance to make a fresco and meet a “duchess” in a Florence Castle.

At our Tuscan farmhouse, meanwhile, we stand in our aprons s in front of our wooden boards and roll out our pasta. Use our palms so we don’t get too tired, we’re told. But it is hard work and we’ve only made enough pasta for two portions! What if I had to roll pasta by hand for a family of six or eight or ten….. No pasta machines either. We roll and roll and roll and then roll it around the rolling pin so that we can slip it off and slice it into long strips.

Presto! Pasta—looks a lot better than my drawing of Pinocchio in the animation class.  We cook it outside on the stone patio.

The best pasta I’ve ever made. Now I’ve just got to get the recipe for the sauce.