Pick your Brain at the MIT Museum 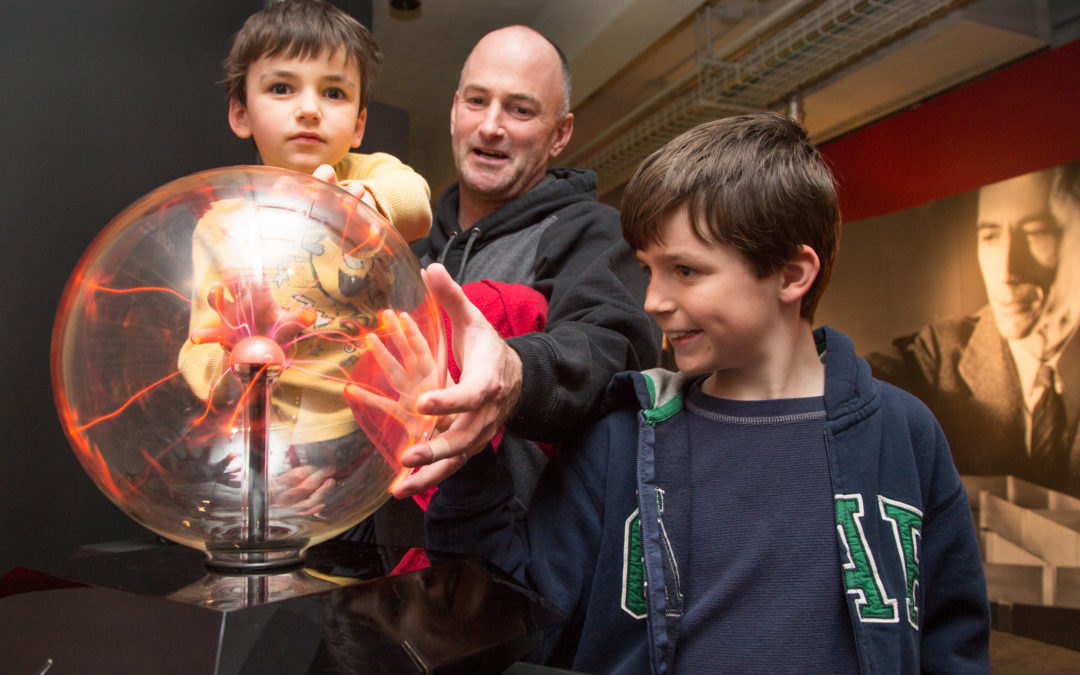 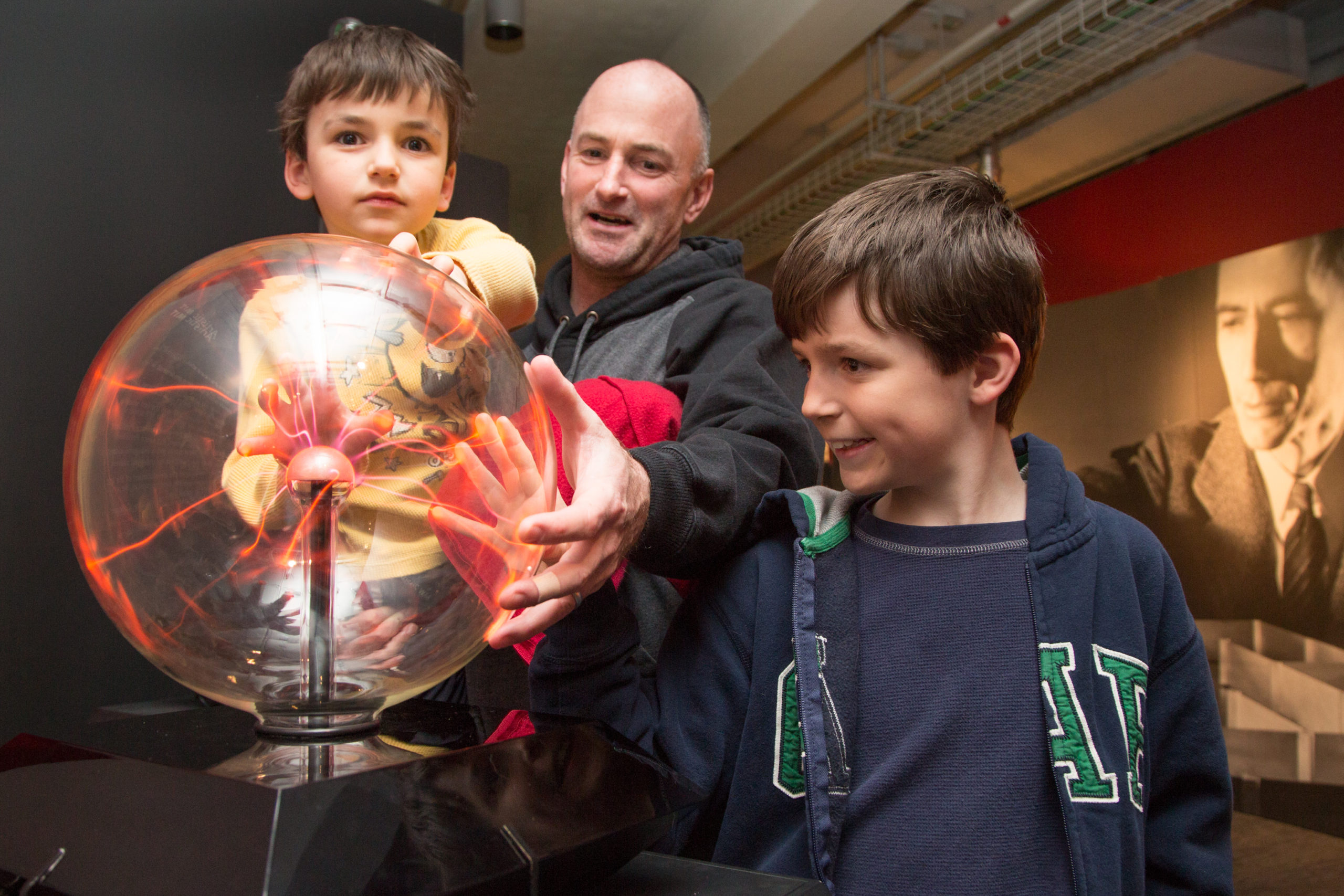 Looking for a mind-boggling experience on a rainy day? The MIT Museum is just the place to visit. Tucked away at 265 Massachusetts Avenue in Cambridge, this nifty museum offers a closer look at the technological wonders of science and engineering.

After days of scorching heat, the sky opened up and it poured as I walk along Mass. Ave Bridge and headed into Cambridge. I had my umbrella, but by the time I met Andrea at the museum, a good part of my jeans were soaked. Other families seeming eager to escape the rain entered the museum just as I got there.

A little background: the museum was founded in 1971 as the MIT Historical Collections, and originally served to preserve historical artifacts around MIT. In 1980 it was renamed the MIT Museum, and has since developed exhibits and educational programs to serve the community. Two floors of galleries feature innovation, invention, and ideas.

First, Andrea and I head up to the second floor, where in a corner a few museum interns had set up a floor activity for kids. The museum offers several drop-in workshops, and today it was bridge building. Participants would have to use rolled up newspapers to build bridges across plastic cups. We continued around the corner to see what else the museum has in store. 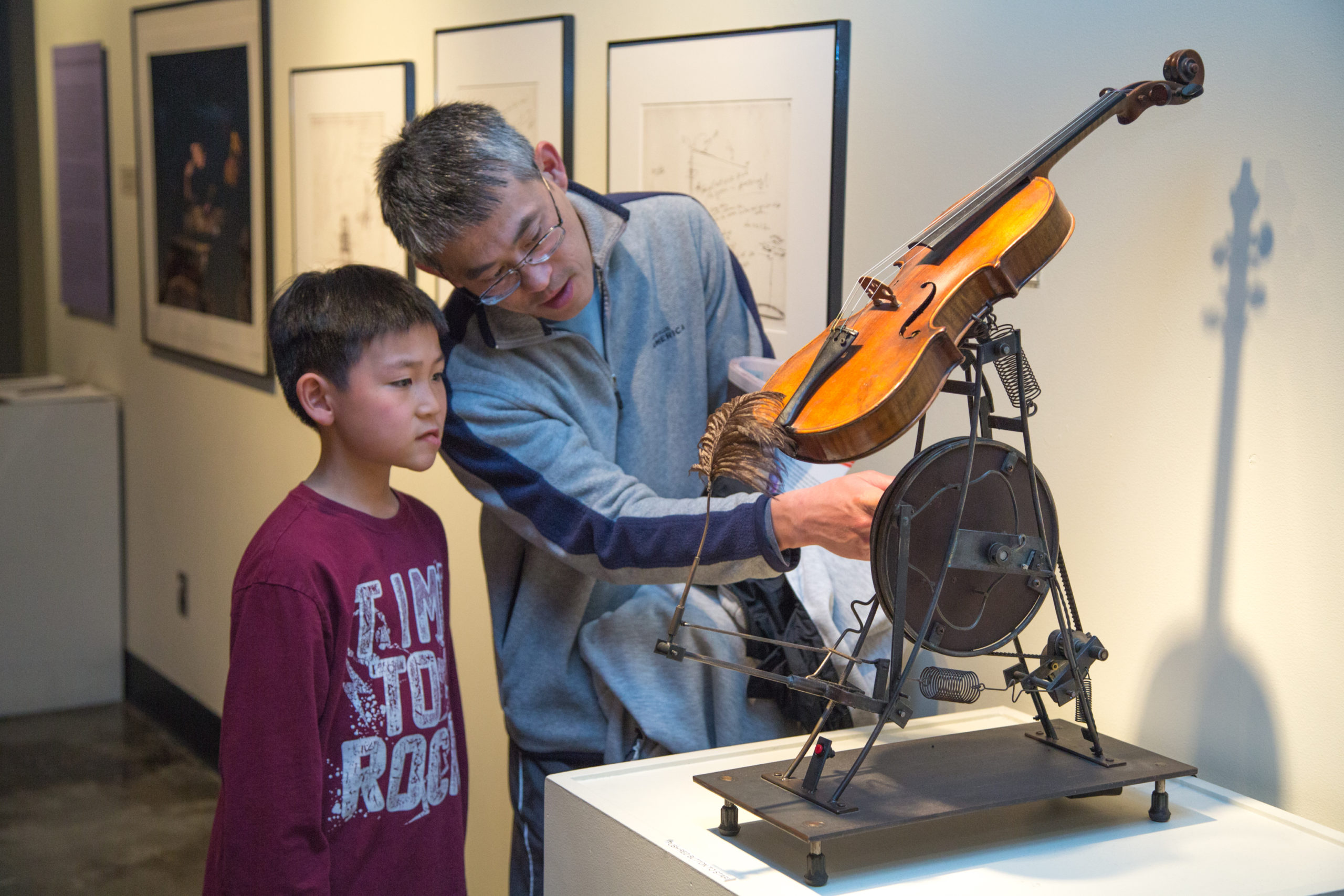 Turns out, it’s rubber bands, band aids, clothes hangers, and tea bags. These objects, and others, are displayed in colorful boxes in the Hidden Heroes exhibit, which tells the stories behind these inventions. The exhibit features 36 objects in total. A fun activity for your child might be to think about other everyday objects and discover the stories of their inventions. What did people do before? It surely made me think.

We move on to Compass Points, the Joël Tettamanti photography exhibit, where stunning photographic shots of landscapes and villages in China, Greenland, Bangladesh, and Nepal hang on the walls. Only a few adults were strolling through this exhibit. Then we found where all the kids were: The Gestural Engineering room, which features the mechanical sculptures of Arthur Ganson. The metallic contraptions are made of spare parts, gears and chains, pulleys and levers, all moving continuously, some more complex than others. Each part depends on another to work.  I found myself staring at a spiraling chain for more than a few minutes, fascinated. (I think my jeans were dry at this point.

Here we met Linda, a chaperone to a large group of middle and high-school students from China. She explained that the MIT Museum is one of several stops the students make on their tour of Boston. In the group, we met Jennifer, 12, who said the machines were “like magic,” and John, 14, who so far finds Boston to be a clean and friendly city.

We walk into the hologram exhibit, where a large poster of Queen Elizabeth hangs. Her eyes seem to follow us with our every turn. After standing, mesmerized at the different posters, we make our way to the Artificial Intelligence (AI) exhibit. Here, you really get to see the wonders of engineering and robotics. We meet Ian, 14, and Rowan, 7, from New Orleans, and Adrien, 14, from Massachusetts, who really like this exhibit, especially the huge robotic arm right in the middle. They also said they’ve been to the Science Museum, which they also enjoy.

On the first floor, we pass a gift shop with a wide selection of gadgets and gizmos, and other scientific and mathematic souvenirs. (Think pins with all the decimals of pi.) In the Sampling MIT exhibit, several topics that are being researched by MIT are explored: brain imaging, air safety, and the internet, to name a few.

Also downstairs, an exhibit featured the slide rule, a tool that I had never heard about before! Also known as a slipstick, this ruler-like instrument was what inventors and engineers used to make calculations before computers. There was a basket with some slide rules, and instructions on how to solve a simple multiplication problem.

We were ready to go, and it was still raining. Luckily, we managed to catch the bus as soon as we left, and headed on to Harvard Square.