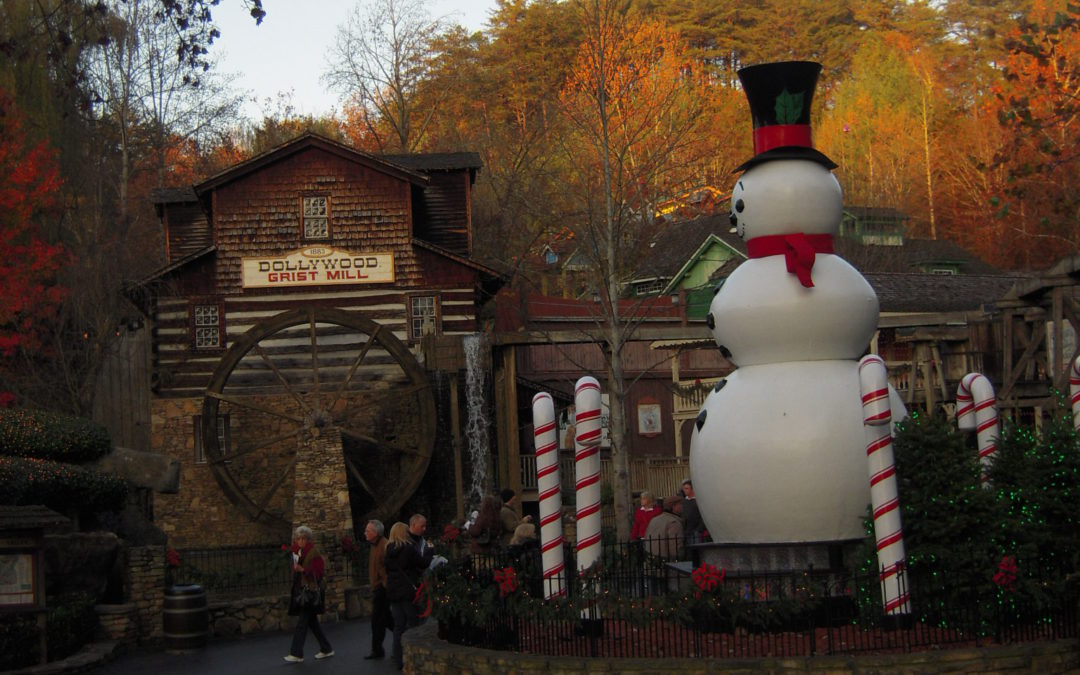 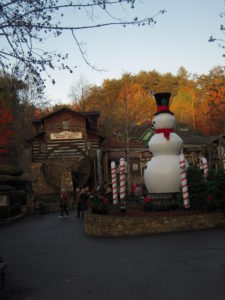 Getting ready for the holidays in Pigeon Forge TN

So Much for Weight Watchers. It seems since I got to Pigeon Forge, TN (www.mypigeonforge.com), I haven’t stopped eating—corn fritters made from corn meal milled at the historic Old Mill that is on the National Register of Historic Places–continuously operating for 170 years. I started the day at The Log Cabin with country ham and fresh biscuits. Fried Green Tomatoes and freshly baked bread were on the agenda for lunch at the Pottery Café where they not only use the fresh corn meal but also produce their own pottery. (Gorgeous by the way) And I’m not even mentioning the stores that sell funnel cakes, homemade taffy and pralines.

And then there was dinner at Dolly Parton’s Dixie Stampede. Of course this wasn’t just about dinner—though they served creamy vegetable soup, cheddar biscuits, succulent chicken, pork, corn, potato and apple turnovers to more than 1000 people—that’s right 1000 people and it was delicious. Did I mention you eat with your hands?

But while we ate, we were treated to a stellar show that ranged from trick riding to flying fairies, a live manger scene complete with camels and the three wise men, kids chasing chickens, a hilarious comedian named Skeeter, singing, racing…I could go on. There are only three in the country (www.dixiestampede.com) here, Myrtle Beach and Branson, Mo. It is clear why people make a stop here part of their Christmas tradition every year—even at more than $40 a ticket (roughly half for kids).

And even in this economy, they sometimes do five shows a day. Impressive!  Up to 11,000 people laughing, clapping, stamping their feet and on occasion, volunteering to chase the chickens (kids) race on stick reindeer (couples) and play giant horseshoes (guys)  and  30 costumed riders—red and green of course—racing and doing all variety of tricks in the big arena. It really is a good old fashioned time—with good eats, a chance to forget all of your troubles—and the world’s. At least 60 per cent of those who come have been here before. There is snow, music and magic—dancing toys and acrobatic jugglers flying to the ceiling. There’s also a video of Dolly Parton reminding all of us about what the season is about—to forget bickering and be at peace with one another.  She’s a very popular figure here. “When she comes it’s a mad house,” says marketing manager Jim Bo Whaley.

But this isn’t the only show in town—far from it. We stop in where magician Terry Evanswood is wowing an audience with Magic Beyond Belief—Christmas themed, of course. He’s been here for 10 years.  There’s dinner theater, Elvis impersonators and more. But you can also just cuddle up in a cabin in the woods with a fire—and a hot tub on the deck.

Where are the bathing suits?