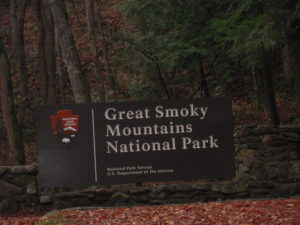 What is the most visited National Park?

(Hint: It isn’t Yellowstone, Yosemite or the Grand Canyon)  It’s Great Smoky National Park—more than 550,000 acres that straddle Tennessee and North Carolina that attracts more than 9 MILLION visitors a year.

It may be because the park is gorgeous, with more than 800 miles of hiking trails, including 70 miles of the Appalachian Trail. It may be because it is so easy to get to—within a day’s drive of half the US population east of the Mississippi River. It’s one of the few national parks that is free too.

There’s hiking and biking (along the Cades Cove Loop Road, fishing and horseback riding.  Locals tell me they love hiking to the Le Conte Mountain Lodge –about five miles—where you can spend the night and have someone else cook for you –my kind of back country experience! Though there are plenty of places to back pack here too. Hike to a waterfall or a mountain peak with a panoramic view of the different forests. And because this park is so far south fall colors last into November.

Unfortunately, 80 per cent of those who visit have a “windshield experience,” Leon Downey tells me as we tour the park. He’s the executive director of the Pigeon Forge Department of Tourism (www.mypigeonforge.com) and an avid hiker who considers the park one of his favorite places—and that’s no small thing for a man who has traveled the world. Pigeon Forge, a town of just over 6,000 people is just six miles away and is considered a gateway toward the park.

Come in January for Wilderness Wildlife Week when free workshops, lectures and guided hikes are offered by volunteers.  This is also a terrific place to learn a little—or a lot–about nature. There are more tree species than in northern Europe, some 1500 flowering plans and over 200 species of birds and 60 mammals (whenever there is a bear sighting, rangers call it a “bear jam” because traffic, especially in summer, gets so snarled). There is an excellent museum in the visitors’ center that shows kids what they might or might not see—deer and mink, river otter, skunks, brook and rainbow trout. Raccoons and red foxes, snapping turtles and wild turkeys (we passed some of those on the road!)

The Cherokee—who lived here first—described the mountains as shaconage, “blue, like smoke.”  All of the southern Appalachians were once Cherokee land but in the 1800s, the westward move of white settlers—along with fraudulent government treaties—ultimately forced the Cherokee on “The Trail of Tears” west. Some eventually found their way back and today, their descendants, The Eastern Band of Cherokee, now live on a reservation next to the park in North Carolina.  Besides the wonders of nature here, this park is a good place to learn some history—including one of the country’s largest collections of log structures and buildings put up by the Civilian Conservation Corps during the Great Depression, when as many as 1,000 workers at a time camped in the park. There are more than 100 historic buildings—cabins, barns, churches, schools and even four grist mills have been preserved.  On some trails, you might see the remnants of stone walls and even fireplaces from cabins.

It’s also amazing that more than half of this park was massively logged–concern about the threat to the forests was what spurred Congress to establish the park in 1934. It’s amazing looking at all of the different trees that so much of this has grown since then.

Unlike other parks, this one was created from private lands–including 1200 farms. That’s why the people of Tennessee and North Carolina always have considered this “the people’s park” and vowed that it would always be free.

All the more reason for us to get out of the car and enjoy it!