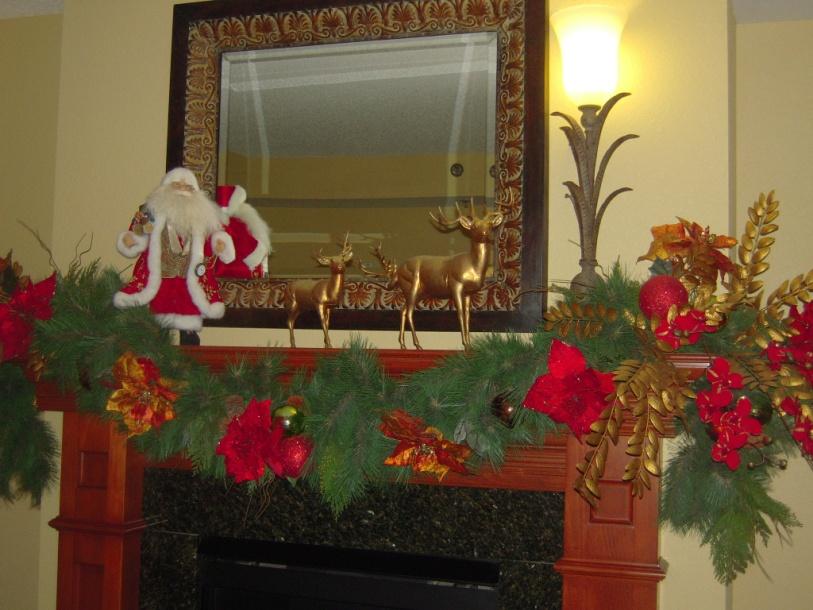 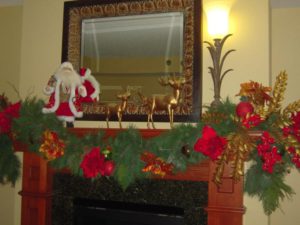 Inside my cabin in Pigeon Forge TN

The Living room is beautifully decked out for the holidays with greenery, wreaths and a tree in all its glory.  On the mantel in my bedroom, Santa shares space with golden elk and garland festooned with bright red holiday balls and ribbon.  Even the lamp is tied with a big red and gold holiday bow and there’s a poinsettia (albeit a silk one) in the bathroom.

And I didn’t have to do a thing. (I don’t have to take down the decorations either. That’s because I’m staying at The Inn at Christmas Place (www.InnatChristmasPlace.com) in Pigeon Forge, TN (www.mypigeonforge.com) which is about an hour’s drive from Knoxville and is considered the gateway to Great Smoky Mountains National Park.

Did I mention the performances by Singing Santas and caroling bells—even a two-story glockenspiel!

Pigeon Forge (population 6,100) draws over 10 million visitors a year—an admirable 86 percent returning. They come for the homey atmosphere, the attractions—shows, restaurants (chicken and dumplings or chicken fried steak maybe?), mini golf (at least five courses!), Dollywood, and access to the National Park—the most visited in the country–and seasonal festivals.

Winterfest—celebrating its 20th anniversary—is especially popular with holiday themed shows all over town and displays of more than five million lights—400 light poles decorated with lit snowflakes, skiing bears and gingerbread men , the ten days of Christmas in 10 displays (I especially liked the six geese a laying) , an Old Mill  on a hill complete with river rushing by, a Blacksmith forging snowflakes, Santa on a Harley, a train…Mother Goose flying, and her tales spelled out in lights-the mouse going up the clock, Humpty Dumpty falling off the wall, the cow jumping over the moon.

No wonder there are nine trolley tours a night drawing something like 9,000 people over the season (which incidentally lasts until February). “It’s become a family tradition for a lot of people to come here to see the lights,” says Sue Carr, who grew up here and now works for the Pigeon Forge Department of Tourism. It’s also become a tradition for families to gather here for Thanksgiving in well-priced cabins and condos—often bringing special foods with them from Louisiana or Mississippi, notes our Trolley Guide Marvelle Sewell who has been leading these tours for 12 years since they started.

I’m proud that Pigeon Forge has partnered with ttk-old.o2dev.net as a featured destination. It’s nice to see a place that families can afford to visit (easy to snare a one-bedroom cabin for well under $100 a night) can visit the most visited national park in the country—and one of the few that is free—and do a little shopping (outlet style) play mini golf, go to Dollywood and eat till they bust.

Let me tell you about our dinner at The Old Mill Restaurant on Little Pigeon River (www.old-mill.com). The name of this town, I learn, comes from all the passenger pigeons that fed on beech tree nuts that were found on the river banks. Forge was Isaac Love’s iron works built on the east bank of the river.  The Old Mill—which still grinds flour—including all that is used at the restaurant—is next door.  I can feel the pounds added to my hips just thinking about dinner:  corn chowder and corn fritters—with corn meal milled right here, of course—Chicken and Dumplings, southern fried chicken, ham, country fried steak. Should I go on? All accompanied by mashed potatoes, green beans—as much as we can eat.

Is there room for desert? Pecan Pie and ice cream—perhaps the best I’ve ever eaten.  We practically roll over to the trolly depot to join the throngs for the five mile tour through town of the Winterfest Lights.

Everyone is in a good mood—at the hotel too. One local suggests it’s because it’s Christmas and no one had to do any work putting up lights or decorations, wrapping presents, cooking and cleaning for guests.

I like that idea.  Is it time for breakfast?