Rainy in Zermatt? No worries – plenty to see, do and eat! 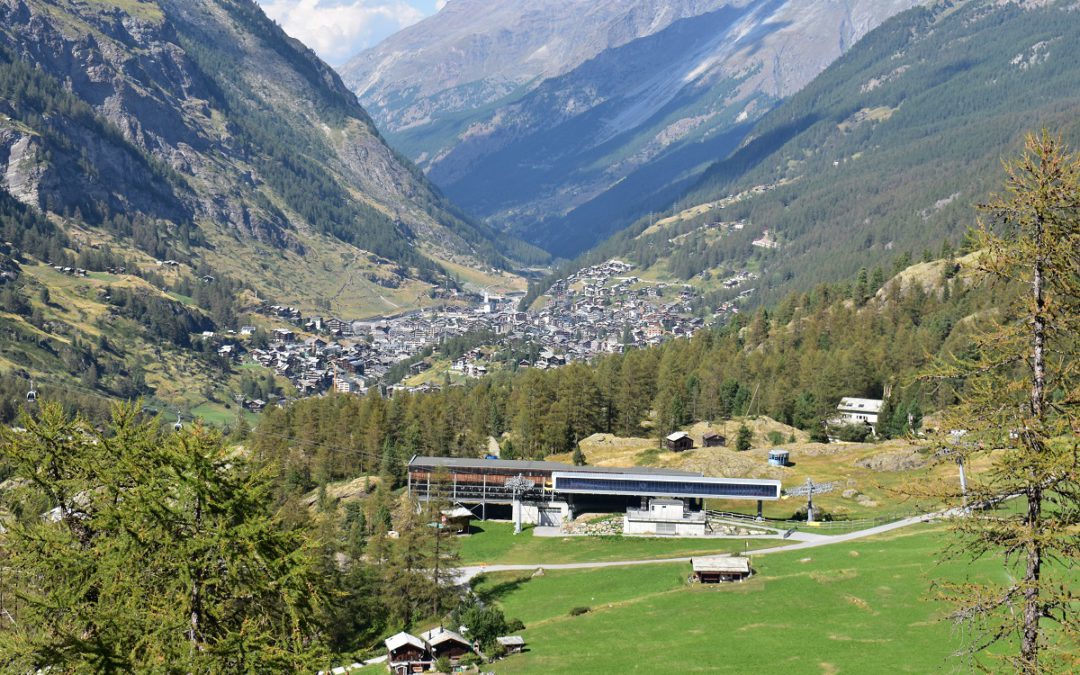 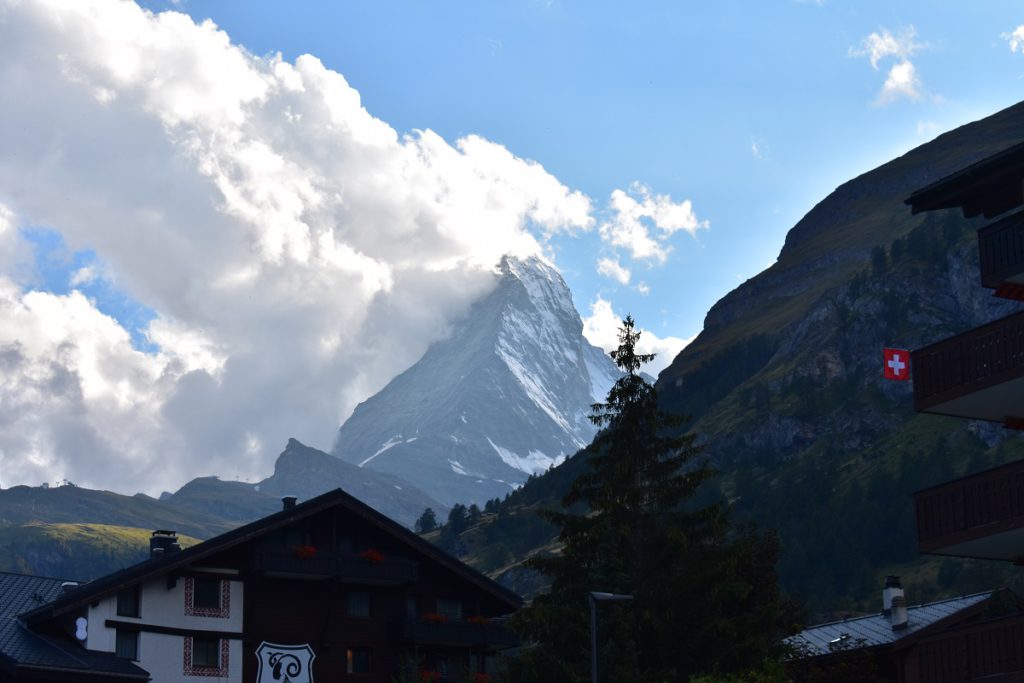 It’s raining. Again. So much for the famous ride up the Gornegrat cogwheel train from Zermatt where the views of the Matterhorn are supposed to be stupendous.

On our arrival in Zermatt the day before it was sunny and we had time for a short hike above the Furi Gondola to the former terminus of the Gornegrat Glacier, which has receded more than 2300 meters since the end of what is called the “Little Ice Age” in 1859. And we had great views of the Matterhorn from our Hotel room that night.

But this morning rain is gently falling and clouds envelope everything/

“Don’t spend the money—you won’t see anything,” said the front desk clerk at the Hotel la Ginabelle in Zermatt. And these rides aren’t cheap—even with our Swiss Rail Pass, the cog railway is more than $50.

“You just have to slow down and wait for nature,” suggests Anicet Tanghe, a young Frenchman we meet at breakfast who is waiting for the weather to clear so he can climb the Matterhorn. “It’s good for your mind to slow down,” he says.

And for my knees too. We have been hiking in the Alps every day for more than a week, following an itinerary set for us by the American owned company Alpenwild, which has arranged the hotels and luggage transfers so that we can hike to the next stop. Zermatt is our last before heading to Zurich and home from there.

Rather than hike, we visit the Matterhorn Museum that explains Zermatt’s evolution from a poor farming village to a world-class summer and winter resort. Between 1857 and 1865, 15 unsuccessful attempts were made to conquer the Matterhorn.

On July 14, 1865, a British group of seven climbers were successful in reaching the summit — but on the way down on the North Face, Douglas Haddow slipped, pulling three other climbers with him. The rope broke and the four were killed — Hadow, 19, Michel Croz, 25, Lord Francis  Douglas, 18, and  the Rev. Charles Hudson, 37.

The accident and the controversy over the severed rope was widely reported around the world. Queen Victoria considered banning mountain climbing for all British citizens. The body of young Lord Douglas was never found.

The accident, said Paul-Marc Julen, one of the fifth generation to oversee the Tradition Julen Zermatt hotels, restaurants and farm, spurred interest in climbing.  “The glaciers were much bigger than now,” he explained. “Suddenly everyone wanted to climb.” 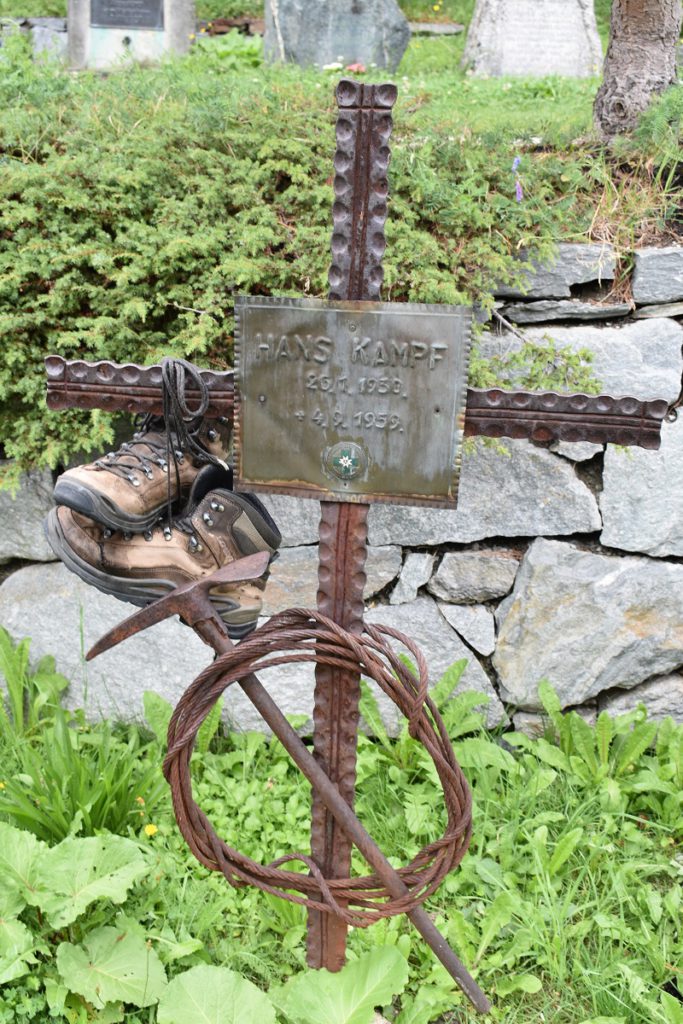 One of the graves in the mountaineers cemetery in Zermatt

The Climber’s Cemetery near the museum is a sad and sobering commentary on all that enthusiasm. About 50 climbers who perished in the mountains were buried here, many from the 19th Century but some from the late 20th Century including Donald Stephen Williams, 20, who was killed in July 1978.  “I chose to climb,” his tombstone reads.

There are graves of British college friends who were killed together, grave stones in French and German—all young men and a few young women who died very young pursuing a great passion. Michel Cruz, who died in the first ascent is buried here.

But besides the climbers, tourists, especially from Britain, began to discover the joys of hiking in the Alps–the unique flowers, the vistas, the fresh mountain air. Local farming families realized there was money to be made in tourism—renting rooms to climbers; providing meals.

Until the 1950s, Paul-Marc said, tourism was only in the summer. Today, of course, Zermatt is a world-famous ski destination and more people visit in winter.

Especially wonderful—no cars, save small electric vans that zip tourists back and forth from the hotels to the train station.  hey go up the mountain via a series of funiculars and cable cars. 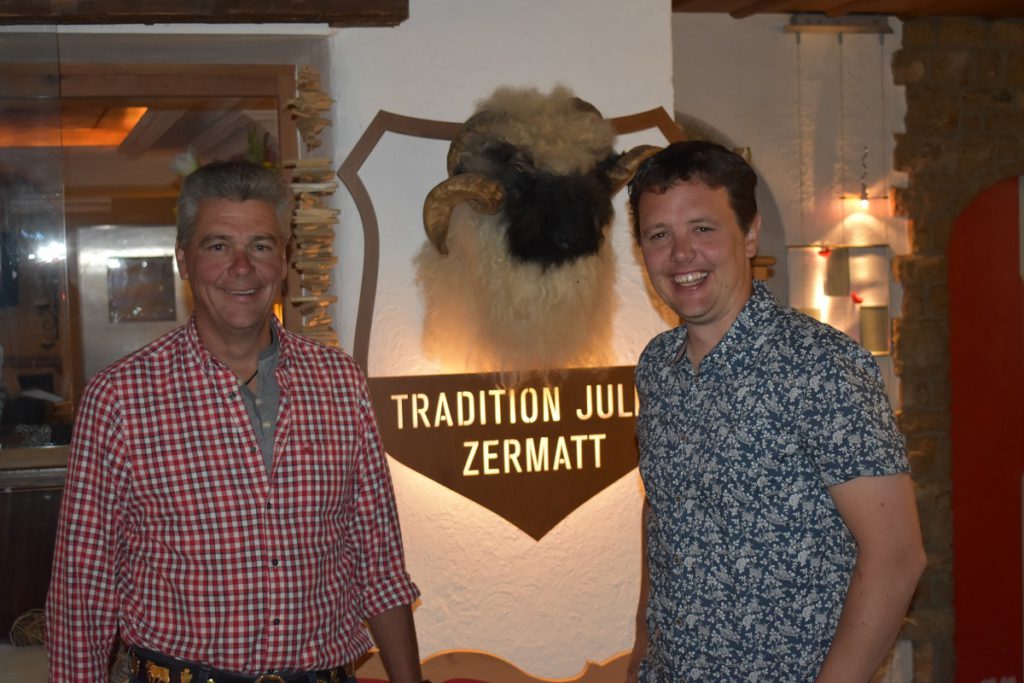 We enjoyed a traditional Swiss meal at the Hotel Julen’s Restaurant Schaferstube, known for its traditional Swiss fondue and raclette and lamb specialties—the lambs are born, reared, fed and processed in a sustainable way—even the hotel blankets are made from their sheeps’ wool; the cheese is from their cows. “What is leftover we use in the energy process…the circle is closed,” he said.

The family raises black-nosed sheep and takes guests once a week to see them in the mountains.

On the menu is homemade lamb sausage, lamb stew, grilled leg of lamb, lamb fillet with Indian spices…the list goes on. All were delicious.

Julen explains that in Zermatt, local families own 95 per cent of the businesses. “We work together and set the rules together,” he said.

Our last morning in Zermatt it is still raining but my daughters are determined to get in one last hike, despite the lack of visibility.  We take the Sunnegga-Rothorn funicular up and plan to hike Zermatt’s famous five-lake loop. 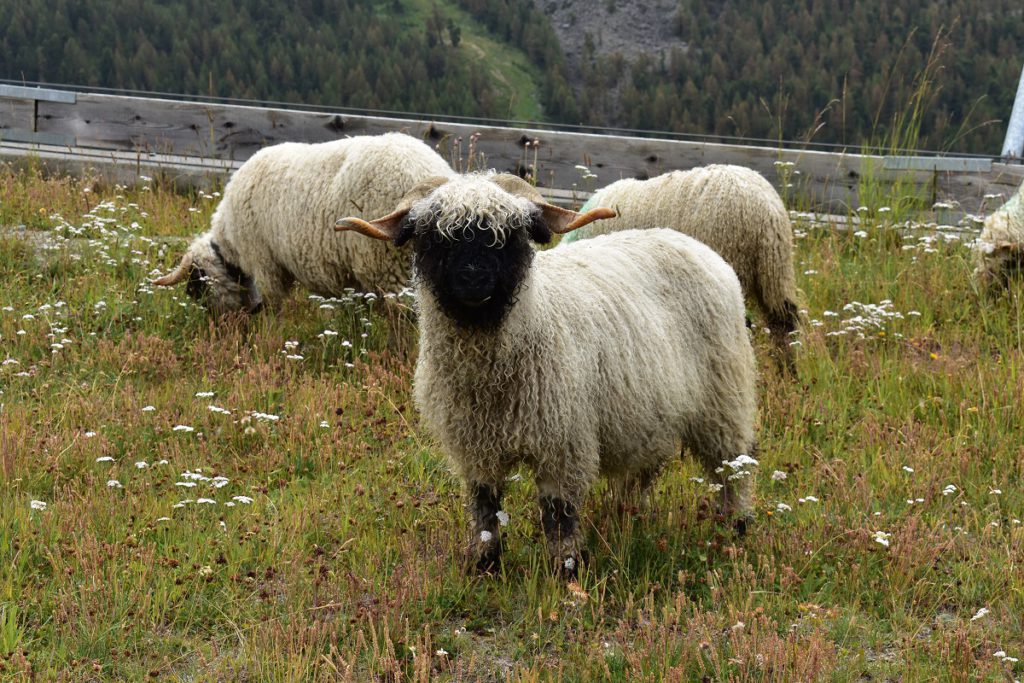 But the clouds are low again. We can’t see much and I’m wondering why we came—And then we come upon a flock of the grazing black-nosed sheep near the top of the funicular. Wonderful!

There’s more to a mountain hike than the views, we realize – a lot more.