Really? Parents should pay more to sit next to small children? 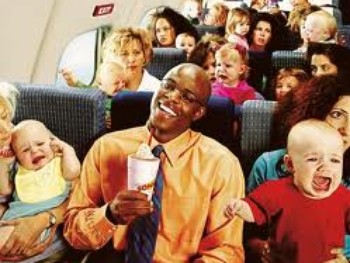 Parents increasingly say they can’t get seats next to their children — even 3 year olds — on packed flights. Those booking through online travel sites may not realize the seats are unassigned. (It is always wise to call an airline directly or check the airline’s site.)

Even getting an assigned seat is no guarantee you’ll sit together, airlines switch aircraft and arbitrarily change seat assignments, often leaving it up to the passengers to negotiate a swap once on board. Increasingly, airlines are charging for ‘preferred seats at the window or aisle which means a family has to pay extra to sit together.  “It makes the stress of traveling with kids even worse,” said Kelly Lewis, the mom of three young children who says it isn’t unusual for her children to be seated throughout the plane. “

A recent Associated Press report noted that on a summer flight from Dallas to San Francisco, only 28 seats out of 144 were available to passengers without an extras fee and 21 were middle seats.

U.S. Sen. Charles Schumer is now asking airlines to allow families with children to sit together without having to pay a premium for an aisle or window seat. He is also asking the U.S. Department of Transportation to regulate the practice.

These include mandatory seat-reservation fees that can force a family of four to spend as much as $150 more for air transportation, and sometimes more, to be guaranteed seats together. In addition, the elimination by some airlines of families-board-first policies have added stress to family travel, especially for those with toddlers in tow.

Schumer also questions whether this “ill-conceived ploy to foist more fees on travelers “will impact passenger safety, requiring airline crew to pay additional attention to children who otherwise would be accommodated by their parents. “This could have profound implications for the safety of children on airlines and it needs to be revisited,” Schumer said in his statement.

According to the CTA, United Airlines recently eliminated the option for families — even those with toddlers or babies — to board early. They are not alone. American Airlines stopped making families-board-early announcements several years ago. Delta, JetBlue and Virgin America continue to allow families with toddlers to board early and US Airways has a hybrid system that gets elite frequent fliers aboard first, then boards families prior to general boarding.

Even getting an assigned seat is no guarantee you’ll sit together, airlines switch aircraft and arbitrarily change seat assignments, often leaving it up to the passengers to negotiate a swap once on board. Increasingly, airlines are charging for ‘preferred seats at the window or aisle which means a family has to pay extra to sit together.  “It makes the stress of traveling with kids even worse,” said Kelly Lewis, the mom of three young children who says it isn’t unusual for her children to be seated throughout the plane. “

A recent Associated Press report noted that on a summer flight from Dallas to San Francisco, only 28 seats out of 144 were available to passengers without an extras fee and 21 were middle seats.

Two years ago, Associated Press reported, Schumer got five major airlines to pledge they wouldn’t charge to stow carry-on bags in overhead bins. I hope he is as successful this time.

The last thing the airlines want, of course, is more government regulation. “Airlines have always worked with their customers to seat parties, including those traveling with children together, and that has not changed,” said Steve Lott from Airlines for America, which represents the airline industry. “In a market as intensely competitive as the airline industry, the customer wins-having ultimate ability to vote with their spending on varying products that are priced differently. It is the market that can-and should-determine how air travel is priced, not the government.”

Really?  I can’t agree with the “let the market decide” when it comes to forcing parents to pay extra to sit next to their preschoolers. Even worse, we’re talking about customers who may only fly once or twice a year and likely don’t even realize this is an issue until they go to check in and discover their seats have been changed because the airplane was changed.

The CTA suggests rather than face questionable legislation or cumbersome regulation, airlines could proactively defuse this issue by adding language to their Customer Service Commitments that explains how families will be handled to keep them together. Voluntarily waiving all seat-reservation fees for children aged six and younger would be a good start. Then, gate agents and flight attendants could be encouraged to use common sense in dealing with families, making every effort to seat them together.

Schumer made the case that a family of four, traveling on a plane with two seats on the left and three seats on the right would either have to separate or pay an additional $100 in order for them to sit next to each other as major airlines increasingly charge for preferred seats at the window or aisle.

That might be a reason to consider Southwest Airlines.  I’ve long been a fan because they allow you to take two bags free. But spokesman Linda Rutherford reminded me that Southwest also has open seating—when you board is based on when you check in—and families routinely can board after the “A” group.  “And in the rare instance the flight is bustling with people traveling through a midpoint, our flight attendants will find passengers willing to shuffle to help a family with a small child or children to sit together–the beauty of open seating,” Rutherford said.

On other airlines, a  parent already stressed and nervous (especially if it is a child’s first flight), may be faced with negotiating with strangers. (And, of course, by the time this occurs all the space in the overhead compartment is gone.)  And no one is likely going to give away a seat they paid extra for.

“I can’t remember the last time we sat on a plane as a family,” said Kim-Marie Evans, a family travel blogger and mom of four from suburban Connecticut. “I try to get as close to the 6 year old as I can and give the others electronics.”

You wouldn’t think anyone in their right mind would want to sit next to someone else’s kindergartner or preschooler but parents say they are not always eager to switch if it means giving up an aisle or bulkhead seat. One man, Lewis added, only agreed to switch so she could sit next to her preschooler after the flight attendant offered to bump him up to first class.

Former flight attendant Heather Zorzini who now pens www.myflyingfingers.com, suggests families be as creative as they can. Offer to swap your good seat (if you have one). And don’t hesitate to ask the flight attendant for help. “We can’t force anyone to move, but sometimes we can offer small incentives to passengers who help us out,” she said.

Of course, once the kids are a little older, sitting apart from their parents can add to their flight experience, making them feel grown-up.“

But that’s no consolation to families who really need to sit together and had followed the airline’s directives to make sure that happened. Shannon Cherry, for one, had booked the flights far in advance, locking in seats. She noted that her twins suffer from Autism on the record.  Still, for no apparent reason, the airline changed the seats. “They didn’t notify us but each week we checked to make sure so when we were moved we knew about it.”

Cherry immediately contacted the airline — she asked me not to say which one — and was told she had no recourse until the family arrived at the gate — unacceptable given the girls’ autism and the likelihood of a full holiday flight. That was when she contacted Sen. Schumer’s office.  “It’s the old squeaky wheel,” Cherry said.