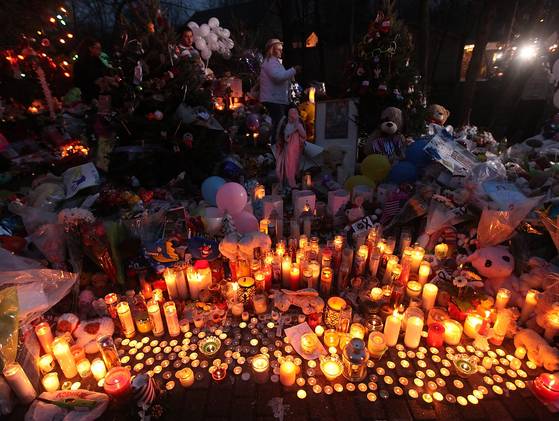 Even on vacation, we couldn’t stop thinking about it.

We were on our way to the Bahamas when we first heard the news of Sandy Hook—we were flying Jet Blue so were watching the news on board.

Not again, everyone on board was thinking. The mood was too sober for a vacation-bound flight.  All weekend, we were getting emails from friends and colleagues who knew we didn’t live far from Newtown. All weekend, the staff at the resort who learned we were from Connecticut wanted to hear what Newtown was like.

No one, of course, could comprehend the tragedy.   I couldn’t help but think about another school shooting nearly 25 years ago that I covered as a young reporter for the Chicago Tribune.

A troubled young woman named Laurie Dann went on a shooting rampage in suburban Winnetka, IL shooting six children. One eight year old, Nick Corwin, died. Dann killed herself after taking a family in a nearby home hostage and shooting one of their kids, a college student. He went on to become an FBI agent and gun control advocate, his career directly impacted by that day.

All of us who covered that story were deeply impacted by it, just as those have been covering Sandy Hook.  My kids were the same age as the children who were shot and went to a suburban school two towns away. That tragedy made us as young parents mindful not only of our mortality but that of our children.  It made us resolve to make the most of the happy times together while we could.

How could such a thing happen in a pretty Midwestern town? We wondered then.  How could little kids not be safe in their classrooms in an upscale suburb where parents had moved because of the schools?

Now, nearly 25 years later, we are wondering anew. Sure school buildings are locked now but this shooter just shot his way in.

Haven’t we learned anything in the years since?  It just seems the senseless killings get worse—Columbine, Virginia Tech, Aurora, CO and now Sandy Hook with more and younger innocent victims each time.

I asked a cousin in Denver how his grade-school aged kids were doing this week.  Sadly, he told me, these mass shootings have become a part of their lives.  They even have drills in school to know what to do.   But all the drills in the world couldn’t save the children in Sandy Hook from the barrage of gunfire.

I’m glad that Vice President Joe Biden has been tasked to lead a new inter-agency gun control task force.  I’m glad Sen. Dianne Feinstein has announced she willintroduce new gun-control legislation at the start of the congressional session in January.  I’m glad that New York Mayor Michael Bloomberg has pledged his considerable wealth and support to this issue.  I’m glad conservatives like Rupert Murdoch are joining in this call for gun control.

Victims of past shootings were joined this past week by several Newtown families in Washington to petition lawmakers, brought together by the Brady Campaign to Prevent Gun Violence.  “What is it going to take for people to take action,” wrote Andre Nikitchyuk, the father of Sandy Hook third grader who escaped when a teacher pulled him into her classroom.

“The task force must move quickly with its work, as 34 Americans will be murdered with guns every day that passes without common sense reforms to our laws, “Mayor Bloomberg said in a statement.

After the 1996 school massacre in Dunblane, Scotland that killed 16 children and one adult, private ownership of handguns was  effectively made illegal in Great Britain.

“Our hearts go out to these families that are in the depth of grief,” Nick’s mother Linda Corwin told the Chicago Tribune this week.  “I know what a deep whole they are in.”

“It’s got to stop,” she told the newspaper.