Remembering a once-in-a-lifetime trip to Tahiti 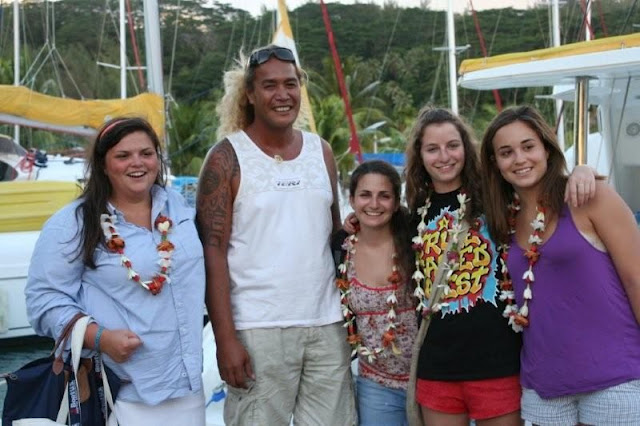 Turo and the girls in Tahiti

Our captain is straight out of a Gaugin painting. He’s tall with a big smile, a long mane of sun-bleached brown hair and tattoos that tell his family story. When he puts a garland of greens around his head, he looks all the more like he stepped out of a painting — or tourist ad.

Welcome to Tahiti.  The four 18 year-old girls in our group are instantly smitten by 40-year-old Turo Aritu, who will be our leader for the next week on the catamaran “Arapima” that will be our home as we sail around a small slice of French Polynesia (Click: PHOTO GALLERY)

We’ve brought our daughter Mel and her three best friends from summer camp – where they all learned to sail — on a special sailing adventure in Tahiti before they all head off to college.

We arrived in Papeete, the capital of Tahiti, on a seven hour flight from Los Angeles on Air Tahiti Nui—not a whole lot farther than Hawaii, we think and overnight before heading to Raiatea, the heart of the yacht charter industry here and where meet Turo, who encourages the girls to practice their high school French because his English is fractured. Everyone speaks French and Tahitian here and some English. That adds to the exotic adventure. Our boat, from Tahiti Yacht Charter, is a twin-hulled catamaran that comfortably sleeps 12 people.

After we stow our gear — I’m always amazed on sailboats how much room there really is — we head into town a short taxi ride away because it turns out tonight the July festival “Heiva” has started. It combines France’s Bastille Day (this is French Polynesia after all) and Tahitian festivities that last for a month with canoe races, dance competitions, carnival rides and restaurants set up just for the festival under thatched roofs with batik on the walls and ceilings and just eight or so oil clothed-topped tables.

We seem to be the only Americans and wonder if secretly everyone is laughing at us, especially when we snap a few pictures of the festivities

We were able to visit a second Heiva in Bora Bora that is held here every July. In one contest, they look like they are hemming curtain rods. But actually, they are working with a kind of dried plant called Pandanus. Along with dancing and celebrating are competitions for dancing, canoe racing and this morning, thatch making.

In the old days, one young local woman named Heiata Tupahiroa explains, these were way all of the Polynesian roofs were made but “we’ve evolved.” Those thatched roofs need to be replaced every five years, hence many modern buildings have conventional shingled or metal roofs. The old people, she says, are “sad” that so few of the young people know the craft.

Today, as Tahitian music blares, young tattooed men wearing sarongs wrapped around their waists and crowns of leaves in their hair work feverishly turning the dried palms into thatch, hemming the leaves together, hacking off the ends. Families are watching; children jump in the sand, babies snooze in their mothers’ arms. It’s kind of like a tailgate party before a high school homecoming game.

The prize — significant cash. The Mayor of Bora Bora is watching along with two other judges. A gentleman named Gaston Thomson watches impassively. The locals are so friendly. Though no one speaks English, they are very patient with my fractured French. Luckily the friends we are sailing with, Pam and Allan Roza, were raised in Canada and speak French.

“Downtown” Bora Bora is nothing like I expect — just a few tiny shops selling everything from expensive pearl necklaces to others selling the brightly colored sarongs for less than $20. The town is sleepy, not at all touristy. We buy a few little gifts but no black pearls. And we stopped in the market for some more baguettes, juice and the essential for this sailing trip – Hinano, the local beer.

Once we corral the girls — they had been at an internet café — we sail around the spectacular Bora Bora lagoon to a private assignation with the sting rays — big, beautiful rays with their long tails. They ignore us as we swim above them and gawk and gawk some more as Turo feeds them some fish.

Amazing.  I want to hold on to this moment. I know in a few short weeks they’ll be off to college and vacations won’t be the same.

That trip was three summers ago and since Mel left for college, we’ve shared adventures but she’s gone off much more often on her own—as it should be.

I’m glad we made it to paradise when we did.