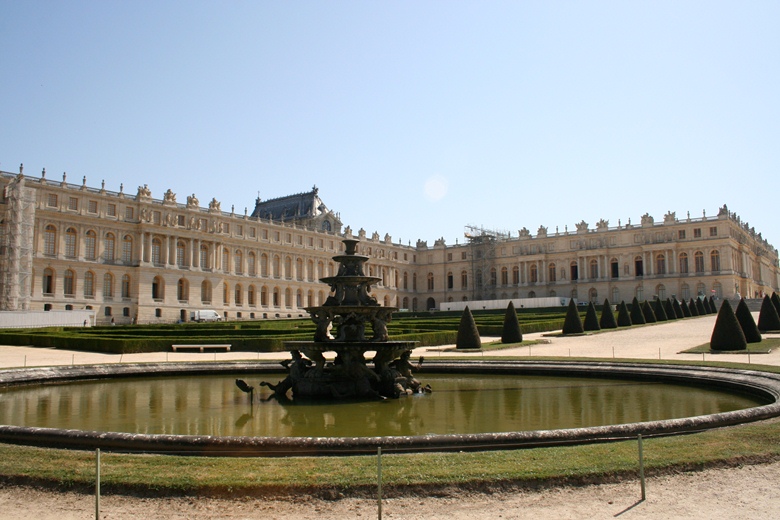 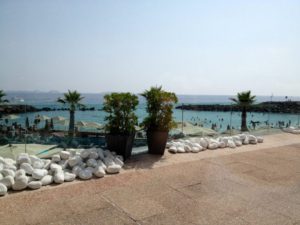 The idea sprang out of a late night text conversation – “Hey, wanna go to Paris?” I asked her, almost jokingly.

“Um, YES!” She replied. And the idea was born. I’ve always wanted to see Paris and France, and I was especially eager since I’m a bit of a World War II buff.  Plus, the trip would come at the perfect time, right at the end of August, when life in New York City is so humid, miserable, and slow that everybody escapes the city. And Emmie, while she grew up in New Jersey, is a descendent of a French-Canadian mother and speaks fluent French herself, so traveling in France would be easy.

After much planning we opted for a bit of a tour of the country.  We’d fly into Paris, rent a car, and drive to Normandy where we’d spend the day.  Then we’d drive back to Versailles (a suburb of Paris) where we’d stay at the Trianon Palace Waldorf Astoria for two days, and catch a train from Paris to Cannes.  In Cannes, we’d stay at a beachfront hotel, the Pullman Cannes Mandelieu, followed by the last few nights at Château Eza, a small and truly luxurious hotel in the hills of Eze overlooking the Mediterranean. We’d fly back to New York from Nice, a twenty-minute cab ride from Eze.

For the flights we opted for the Economy Plus option on Delta. While certainly not Business Class, the extra room and comfort level was a bonus for the long 7-8 hour flight. When we touched down in Paris we were exhausted and in need of a shower, but we headed straight for the rental car and tore down the highway towards Normandy, about a 2-3 hour drive. Emmie drove first (mastering the stick shift like an old pro) while I napped.

In Normandy, we parked the car on the side of the road near Omaha beach and went exploring.  We strolled along the path slightly above the sand, in the same place where sixty years earlier American and Allied troops had spilled blood for a cause that would influence our Grandfathers’, and in many ways, our own lives.  Jetlagged, hungry, and in need of a bed, we found our way to our hotel for the night — Chateau de Goville–an old manor in the Norman countryside. I kept saying the château would be Downton Abbey-esque, but it wasn’t until we settled into our room and found a plaque on the wall stating that the Duchess of the Estate had lived (and died!) in this very room nearly seventy years ago that we really felt the chateau’s history. We both had a hard time sleeping that night.

For the comfort lost in Normandy, the Trianon Palace Waldorf Astoria in Versailles more than made up for it.  Like most Waldorf properties, the hotel is one of a kind; it sits on a corner of the Royal Chateau Versailles and has easy access to both the town of Versailles and the palace. We happened to be there during a summer heat wave, so exploring Versailles was a sweaty endeavor. After a few hours of walking through the gardens and the palace we decided to head back to the hotel for a swim and a cocktail. While we did find Marie Antoinette’s hamlet- where the queen dressed up like a peasant and milked the cows- quite interesting, the main palace was just too crowded and hot to enjoy.

The next morning we headed south on an early train from Paris to Cannes. We had five days planned at the Pullman Mandelieu Royal Casino, a hotel we picked for its private beach and close access to Cannes, without actually being right in the heart of the hustle and bustle. The hotel was nice enough, but its best feature was its private beach.  Plus there was a public beach right next to the hotel where we could sail, water ski, kite surf, etc… I took Emmie sailing for the first time; she still says it was her favorite part of the trip.

On our last day in Cannes, with the help of the France Tourism Bureau, we took the ferry to the Isles de Lerins, a small chain of four islands about a 30-minute ferry ride from the Port of Cannes. The largest island, Isle Sainte Marguerite, is known for snorkeling and sailing, and was also once a Roman fort and the home of The Man in the Iron Mask, an imprisoned French royal heir who was made famous by a Leonardo Dicaprio movie. The island was interesting enough, but with temperatures in the mid-90’s after a day outside we were happy to find our way to fresh showers and a cool air conditioned hotel dining room.

After working on our tans for so long around Cannes, we headed for the Château Eza in Eze, a small town in the hills outside Nice overlooking the Mediterranean. We found ourselves enchanted by the town – a medieval stone town built into the hillsides. Artists, restaurants, and small shops line the narrow cobblestone streets. The hotel has to send its porters down the hill with wheelbarrows to get our luggage because it’s such a climb to the main facility — but it’s worth it. The rooms are more like homes, complete with two bathrooms, a dressing room, a living room, etc etc… As we made our way around Eze, exploring the town and the famous Fragonard Perfume factory, we came across a charming artist, Luc Villiard , whose studio is carved out of the hillside into a small cave.  His paintings have a slight Picasso influence, which I found unique. Emmie and I purchased one, joking it would be great for our nursery one day. It currently hangs in our kitchen here in New York City and we correspond with Luc via email, hoping to purchase more of his work.

The dinner we had that last night, caviar, oysters, and martinis while looking out at the sunset and the French Cote-D-Azur was one of a kind. The hotel’s dining room is right on the edge of a cliff that overlooks the Mediterranean.  Emmie and I finished our dinner and treated ourselves to a bottle of champagne. We toasted to this trip and future trips while looking out at the ocean, thinking of future adventures, future successes and failures we’d share, and I smiled.

Before this trip one of my friends had mentioned that it would be a make-it-or-break-it moment for us. Looking at her, letting my mind picture all the things we were going to do together, I knew at that moment that the trip had been a make it moment for us, with many more to come.