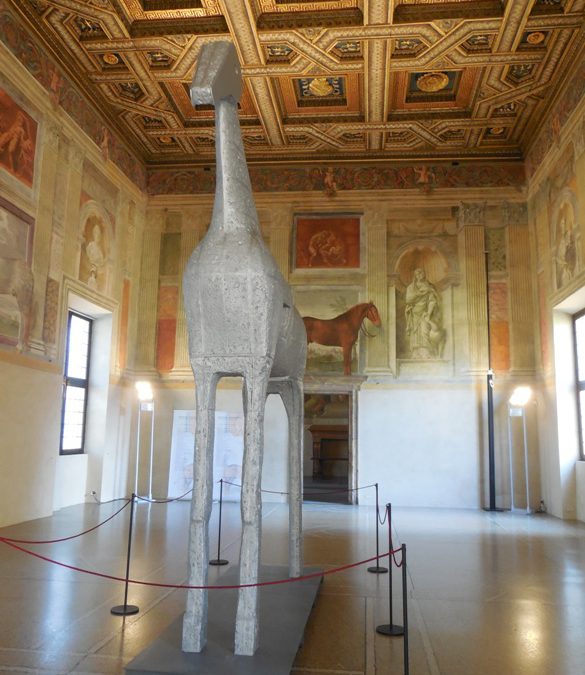 Mantova, Italy (Day Seven) — How many salamanders can you find?

There are dozens carved into fireplaces hidden in paintings in the Palazzo Te in Mantova in northern Italy, a gem of a Renaissance City as yet undiscovered by American tourists. Palazzo Te is considered one of the greatest of Renaissance palaces built between 1525 and 1535.

It seems that 20-something Federico II Gonzaga, a member of the ruling family in the early 16th Century, was looking for a place to have fun entertaining his friends and his mistress — and get away from his strong willed mother Isabella d’Este, who is credited with making the Mantovan court one of Renaissance Italy’s most famous.

Mantova was once surrounded by four lakes formed by the River Mincio. The Te island connected by bridge to the city’s southern walls and was thought to be green and peaceful at the time. In the early 1500s, Francesco II Gonzaga, husband of Isabella d’Este and Federico’s father, built stables for his beloved race horses and even a house. Today it’s about a half-hour walk or short drive from the city center.

Federico renovated those stables into his fun palace with the help of Giulio Romano, widely considered Raphael’s best pupil. “Everything was for pleasure,” says our guide Guiliana Varini.

Why the salamander? The Marquis apparently liked to compare his passion with the salamander who was cold-blooded and just the opposite. When she guides school groups, Guiliana Varini said, the kids hunt for the salamanders — to be found in every room.

Kids also love The Hall of Horses with life-sized paintings of some of his favorite horses from the 1520s.

In the Chamber of the Giants, wall-sized paintings tell the story of the fall of the giants who had tried to climb Mount Olympus only to be struck down by the thunderbolts of Jupiter. There is no division between the walls and ceiling which makes the figures even more powerful — and scary. There was a big fireplace in the room and it seems when the fire was crackling and the light playing on the walls, it was like a 4-D experience for guests. The acoustics were another treat for guests- you could whisper at one end of the room and be heard at the other. Charles Dickens visited here in the 19th Century and is said to have found the Chamber of the Giants “terrifying,” according to Guiliana.

I can’t even imagine what it must have been like to attend a banquet here.