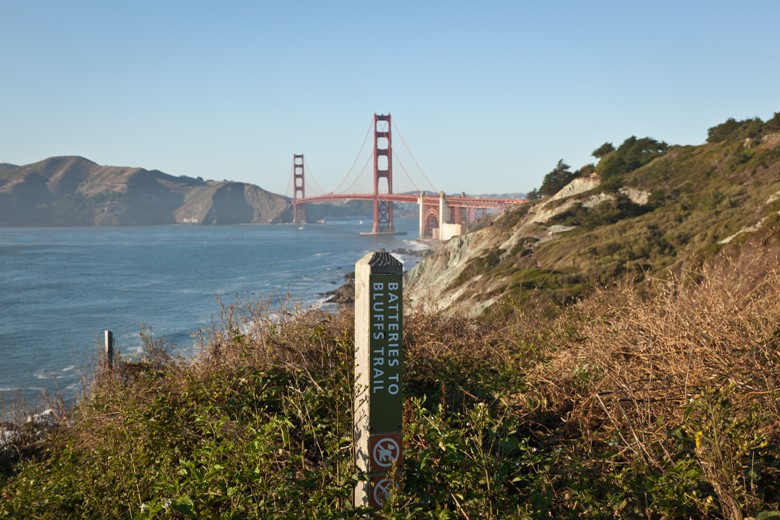 We’re hiking the famous Batteries to Bluffs trail in San Francisco’s Presidio, a national park unlike any other, which takes us up and down steps along the western Pacific shoreline, past historic gun batteries, rewarding us with a spectacular view of the Golden Gate Bridge. Wow!

Welcome to the world’s largest national park in an urban area, spanning nearly 1,500 acres with over 990 acres of open space and extensive bike and hiking trails that are easily accessible by public transit and the free PresidiGo Shuttle that runs from downtown stops to the park.

But when you think of San Francisco sites to take the kids, The Presidio doesn’t come to mind the way the Golden Gate Bridge or cable cars do.

It should. Not only is it free, but the Presidio, today revered as the birthplace of San Francisco, offers more things to see and do than most city attractions or national parks.

It’s fitting that we explore the gun batteries because the Presidio has housed military troops from the time the Spanish arrived in 1776 (the Ohlone people lived here before that) through Mexican control and until 1994 when the U.S. Army left after occupying the Presidio for more than a century, starting in 1846. Soldiers from the Presidio fought in every major American War, including the heroic Buffalo Soldiers, the segregated African-American regiments. Many of these soldiers are buried here in the San Francisco National Cemetery, the first national cemetery on the West Coast.

Check out the impressive 300-acre Historic Forest — Cypress, pine and eucalyptus groves — all planted by the Army.

On Oct. 1, 1994, the Presidio was transferred to the National Park Service, but this park is being managed in a unique way. Because some wanted the land sold off, it took an act of Congress to establish the Presidio Trust, tasked with not only preserving and protecting the park’s resources but also making it financially self-sufficient.

Now with that goal met last year, The Presidio is finally able to strut its stuff as a destination, with new restaurants, an inn, programs and, starting again in spring, twice-weekly family-friendly outdoor parties on the lawn of the Main Post — Presidio Picnics (every Sunday 11-4, April through October) and Presidio Twilight (every Thursday 5-8 p.m., April through October) with food trucks, music, and more.

Three hundred and 50 historic buildings have been repurposed for public use and some 3,000 lucky San Franciscans and 200 organizations rent digs here. 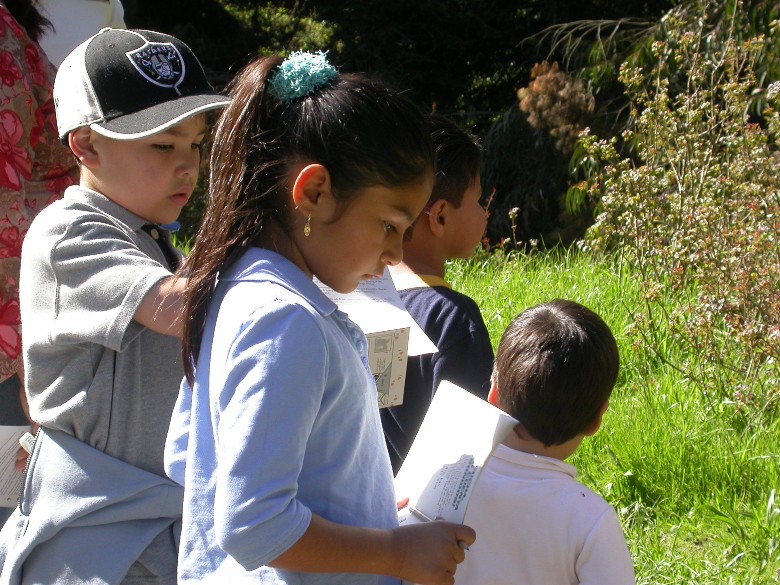 There’s plenty of hiking and biking with a 24-mile hiking and biking trail network, complete with special Kids on Trails program books designed to help kids and the grown-ups with them learn more about the history and nature here. Have you ever played Nature Bingo?

But the Presidio is also the place to:

— Explore San Francisco’s military history with multimedia exhibits at The Presidio Officers’ Club. Don’t miss some of the original adobe walls, or the toys the children of military personnel played with — dolls, marbles, tiny toy figurines.

— Spend the night away from the downtown hubbub either at the deluxe 22-room Inn at the Presidio, once home to U.S. Army bachelor officers or under the stars camping at Rob Hill Campground.

— Chowing down on locally sourced eats at the casual Arguello (fish taco, anyone?) or the hip Commissary with its Spanish-inspired menu, both overseen by award-winning San Francisco chef Traci Des Jardins. (Read my interview with Traci here.)

— Learn more about Walt Disney at the Walt Disney Family Museum. Disney famously got his idea for Disneyland while lamenting that there weren’t enough fun activities for families like his — he was the father of two daughters — to do together. At this museum, you see Disney as a dad with hundreds of family pictures, see free Disney movies and find out how he imagined Disneyland before it was built.

— Play golf at The Presidio Golf Course, famous for its forest setting.

— Bird watch — there are more than 300 species, including the Great Horned Owl.

— Meet an archaeologist at the archaeological site (April through October). There is a state-of-the-art archaeology lab on the Officers’ Club campus and you can see some of the artifacts in the museum — everything from dolls to marbles.

The kids I interviewed for my new “Kid’s Guide to San Francisco” are big fans of Crissy Field. Once home to flying demonstrations and the military, today it is considered the park’s “front door” with trails, wetlands, bike paths, kite-flying or a chance to play in the sand.

When was the last time you built a sand castle?