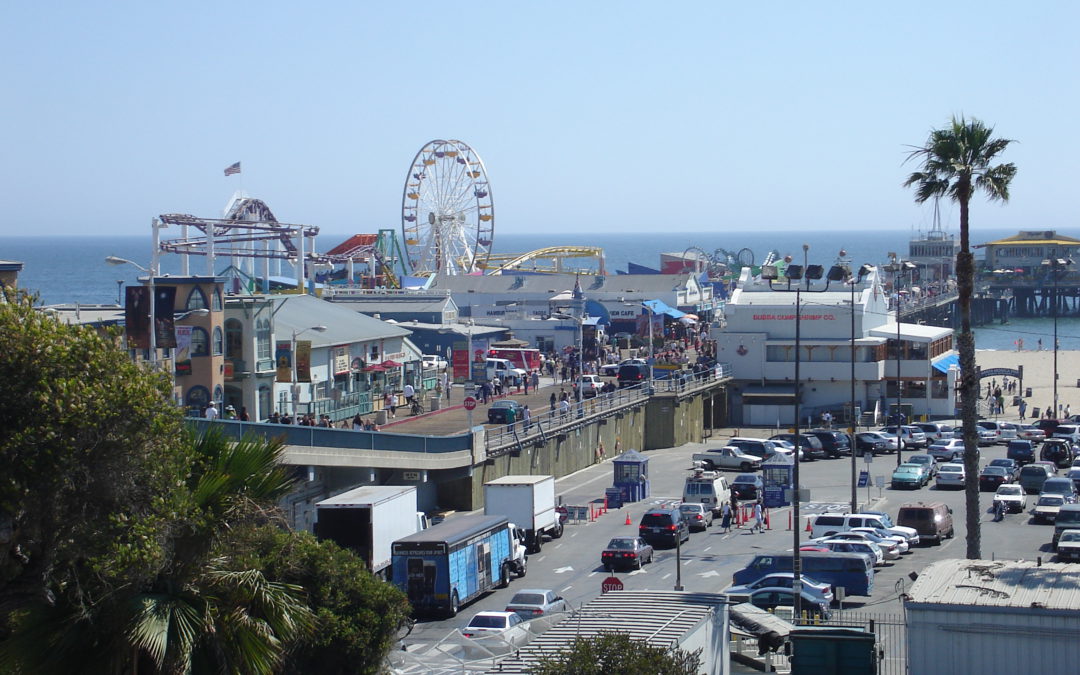 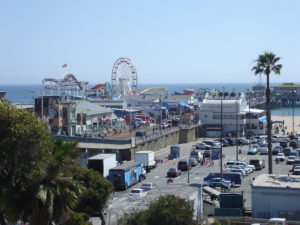 “It is really cool to watch people who know what they are doing and then try it yourself,” says 13 year old Jennifer, here on Santa Monica beach with her brother. Her family is vacationing in Southern California from Canada.

“The idea of having a gymnasium right at the ocean is really cool—the ropes and the swings and bars…you don’t have that at beaches at home,” said Elizabeth Gevorkian, 16, who lives nearby at Burbank.

She’s here in Santa Monica for a day of fun with her friends.  Fifteen year old Julia Newton likes the rides on the world-famous Santa Monica Pier—the roller coaster, the Ferris wheel, the twirling cups.  “I like to be like a little kid!” she explains.

I’m staying at the Loews right here in Santa Monica overlooking the beach and I can’t think of a better location for a hotel.   The fish at dinner just came off the boat I can see the Ferris wheel from my room!

When I go for a before dinner walk on the beach, there are adults—and kids—doing yoga, playing on the swings and the gymnastics equipment.  (There is an area for the kids to climb mini ropes!) They are inline skating, riding bikes, swinging and jumping in and out of the surf and squealing with laughter.  They are lining up for fresh lemonade and tacos, playing games in the arcade on the pier.

The beach and the Third Street Promenade—three pedestrian only blocks between Broadway and Wilshire Boulevard—draws millions of people a year.   “You will see someone famous or see a TV show being taped,” said my friend Jennifer Miner, one of thevacationgals.com who lives in a neighboring community  She also says one of LA’s best burger places is here –Umami burger.

On the pier, I meet families from New York and as far away as Australia.   “We don’t have anything like this at home,” said 13 year old Kristin Thiele, here with her family for several weeks from Brisbane.

Two teenaged brothers from New York, meanwhile, were taking in the scene just before sunset—the men intently fishing from the pier, those riding rides and others just looking out over the ocean. Watching the people play in the sand on the beach that stretches for miles.   “I like seeing the view from the top of the Ferris wheel,” said 16 year old Ned

I can’t think of a place that is more emblematic of the Southern California lifestyle—the excellent gymnasts, those practicing yoga, riding bikes and playing in the surf.  IT is casual, warm and beautiful.  There are several beach volleyball games going on simultaneously.  “It has its own character,” said Kristin Thiele.