Seeing Mayan ruins and tubing through a cave 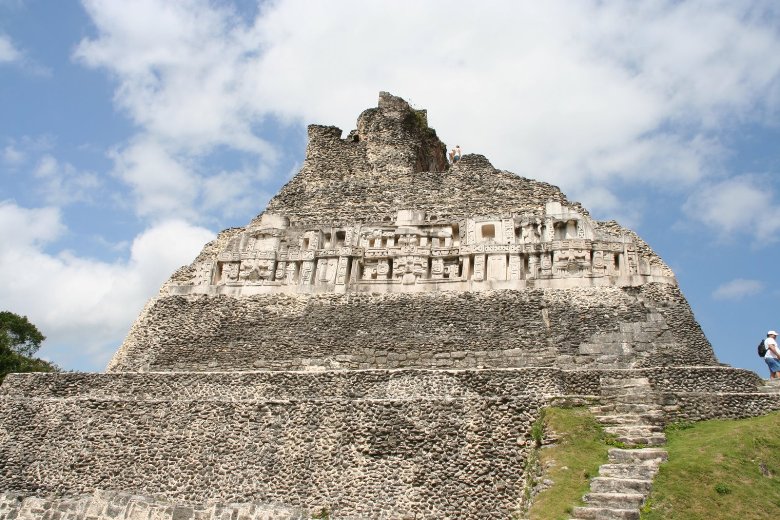 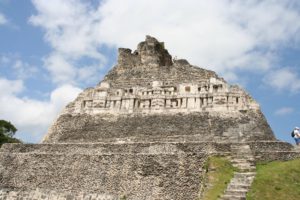 Mayan ruins at Xunantunich in Belize

DAY SIX — Right after breakfast, we head out with our guide, Wilbert Moh, to the Mayan site of Xunantunich, about 15 minutes from the Ka’Ana resort. It means Stone Maiden — so named, Moh explains, because a hunter in the late 1800s claimed he spotted the apparition of a beautiful Mayan woman here. The structures — including one that is the second highest in Belize – rise up to 525 feet. It takes your breath away to think they were built 1,000 years ago. At one point, 7,000 Mayans lived and worked here.

To get here, we ride on a hand-cranked ferry across the Mopan River. The bank is lined with small stands selling the usual souvenirs — hand embroidered bags from villages, crazy hats, tee shirts, hammocks.

We climb to up 85 steep stone steps to the top of what was once a “multi-purpose building” — kings palace, priest’s temple, place for performances. We see can look across the unmarked border into Guatemala. I try to imagine the king standing where I’m standing addressing the crowds below. I imagine women cooking, and vendors trading their goods.

We see hieroglyphs that represent the rain god, the goddess of fertility and others. The first excavations here were back in the 1890s; this site only became a national park in the 1990s. Moh shows us the small benches that would have been covered with jaguar skins, where the Mayans slept. They were short people! Yet the steps are so steep. That was to keep the lower classes from coming up to the wealthy’s homes — kind of an ancient condo. The higher they were, the closer to heaven they believed they were. I try to imagine the limestone painted bright red as it would have been in those days. We check out the field where the Mayans played a kind of sacred game with a heavy (six or seven pound) rubber ball made from rubber culled from rubber trees. You wouldn’t have wanted to be the opposing team — they were captives who would be sacrificed afterwards – win or lose. They Mayans were big into human sacrifice, apparently — always hoping to cultivate their gods’ favor. In the end though, their culture crumbled. No one knows exactly why — probably a combination of warring factions, illness and of trying to continually grow crops on the same land.

In one spot, in the second tallest “condo” Moh tells us a baby was buried. He apparently suffered from birth defects. His parents buried him in their house so he wouldn’t be lonely on his trip into the afterlife.

The 13 doorways we see represent the 13 layers of heaven, we learn. Around us, we see grass and trees that look just like mounds but underneath are more structures. Only about 55 per cent has been uncovered.

Tikal, not far away in Guatemala, we learn, is much, much larger. But we have had enough ruins for one day… we’re hot.

Good thing we’re heading to Belize’s most unique attraction — cave tubing. We go to Jaguar Paw Resort (www.jaguarpaw.com) where, after a hearty lunch of chicken, rice and beans and coleslaw (what Moh tells us his mom would make for Sunday lunch), we grab inner tubes, life jackets strapped to them and walk a mile through the jungle to the Caves Branch River. We get in our tubes and head into the cave, the current carrying us along. Good thing we have headlamps — it’s pitch dark, but we can make out different formations in the limestone — a woman, a gorilla, a man’s face, a space ship. We float 2,300 feet through the dark cave.

The water is cool but comfortable. It’s not always easy to steer our tubes — we push off cave walls when we get stuck and paddle madly to go in the right direction. Wilbert — who has done this dozens of times — pushes us along in spots. He tells us Mayans made human sacrifices here too because they believed their victims would be closer to the underworld gods. Spooky thought — especially since they were often sacrificing young children to appease the gods. The rapids are gentle. The water in some spots is so shallow we have to lift our butts so we don’t get scraped on the rocks. In other spots, it’s 15 feet deep. It really is fun and a unique experience. Wilbert says there are a few other places to cave tube in Belize but this is the most easily accessible by road and the safest operation. It used to be done mostly by locals, but now tourists and cruise ship passengers have made cave tubing one of the most popular adventures in this small country (there also is a zip line here on this resort as well).

The water is so clear we see little fish and mussels and all colors of rock. There is a tree root that broke through the cave ceiling. I think one of these days Disney is going to turn this into an attraction it is so terrific.

When we come out of the cave, we float along under the jungle canopy for another 20 minutes or so, listening to the birds chirping. We hope to see howler monkeys in the trees but they stay way when there are a lot of people, Wilbert says. We have this section of the river nearly to ourselves. There are some more gentle rapids, the current carries us along. Of course the monkeys don’t pop out on cue… it’s not Disney world after all.

But right on schedule, my husband dumps my tube over. I should have been expecting that… I come up sputtering… and laughing.