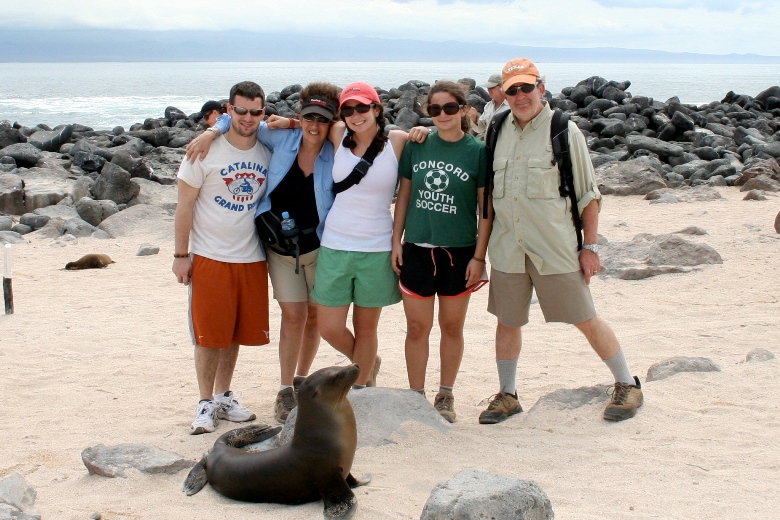 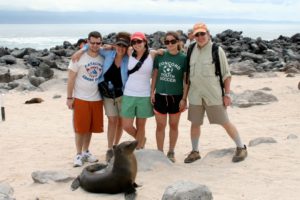 In the Galapagos with the sea lions

The mountains have turned peachy; the sky is pink and orange. This sunset is flat-out gorgeous. A pelican flies overhead. Flamingos swoop down.

Welcome to Laguna de Chaxa National Reserve for Flamingos, about an hour from tiny (just 4,000 people) St. Pedro, Chile where just after New Year’s this past January, we stayed at the first-rate, 32-room Tierra Atacama (www.tierraatacama.com). We loved the outdoor showers, the bartender who performs magic tricks and sitting around the fire pits at night after a day of exploration.

The Atacama region (less than a two-hour flight from Santiago) is one of the most visited in Chile and it is easy to see why. The Atacama offers spectacular desert landscapes, the chance to hike to an ancient village, taste a llama kebob (you’ll see llamas everywhere here), head to the top of a volcano at 18,000 feet or to the highest geyser field in the world — El Tatio Geysers at 14,190 feet — and visit unique nature reserves like Leguna de Chaxa.

I can’t think of a better spot for an adventure with grown or nearly grown children — I had my two adventure-loving daughters and my older daughter’s boyfriend along with me. Atacama Salt Lake is otherworldly — you think the huge expanse should be water but, as far as the eye can see, it is just rock and salt. The last time there was a lake here was 10,000 years ago. Then there are the flamingos. Three of the world’s six species summer here. The Andean, Chilean and James’ Flamingos, our guild told us, are differentiated only by the color of their legs and wings.

They are so fun to watch. We looked up at the ring of mountains and could even see steam coming from one of the volcanoes. Isn’t nature grand?

I know many of you couldn’t imagine forsaking home during the Christmas holidays. It’s certainly a frustrating and expensive time to travel. But for my gang, taking off during the holidays has become as much of a tradition for our interfaith family as lighting the menorah and hanging stockings over the fireplace. We’ve skied in Colorado and sailed in the British Virgin Islands where one year my husband and son became certified scuba divers. This year my daughter Mel will learn to dive at a tiny resort on Grand Turk, Turks and Caicos (http://www.bohioresort.com) and I can’t wait to share a sport I love with her.

Our most memorable holiday trips, it seems, always involve getting up close and personal to nature. In the Galapagos Islands one Christmas, we hiked up steep steps that are actually the rim of an ancient volcano. The bay we anchored in — Darwin Bay at Tower Island (also known as Genovesa Island) — is actually a caldera formed by the ancient volcano. We walked around the rim looking at more birds than I’ve ever seen in one place — Red-Footed Boobies, Blue-Footed Boobies, gulls, frigates. We watched the Nazca Boobies’ mating dance — the male whistles to try to attract a female. It turns out that the Nazca Boobies can’t take care of more than one chick at a time, so as a form of insurance, they lay two eggs — if the first one is healthy, they kick the other egg out of the nest.

Are we really swimming with sea lions? Posing with a giant tortoise? It’s easy to see why trips to the Galapagos — albeit expensive — are especially popular for families, say adventure outfitters like Abercrombie and Kent (www.abercrombiekent.com),Thomson Family Adventures (www.familyadventures.com) and Wildland Adventures (www.wildland.com), which helped arrange our trip.

There’s another plus to such adventures notes Kurt Kutay, the founder of Wildland Adventures. Families are drawn not only by the wildlife, but also by the opportunity to get themselves and their kids unplugged. “There is no easy way to maintain one’s wired existence when you’re out in the middle of the ocean,” Kutay said, “so it becomes this enforced bonding experience for families — no distractions, no TV, just the environment and you.”

There’s also something to be said for taking kids — and yourselves — out of your comfort zone and seeing how well you manage together without the accoutrements of modern life.

We learned that another Christmas near Costa Rica’s Corcovado National Park in a tent camp in the Osa Peninsula, a place so remote that it was accessible only by foot (www.costaricaexpeditions.com). A horse cart carried our luggage from the tiny Carate airstrip down one of the most beautiful beaches we’ve ever seen. This was no sanitized paradise, however. There were bugs and it was blistering hot, but that just added to the adventure. We gamely stood in line for cold showers (especially welcome after a tromp in the rain forest) and shared communal bathrooms, navigating by flashlight at night. We gathered for drinks (margaritas and martinis for the adults: Virgin coladas for the kids) at the Thatched-roof Hammock Bar and under another thatched roof for simple, hearty meals served at communal picnic tables.

Scarlet macaws flew over our heads. We galloped on horseback down the beach. We hiked into the rain forest, where we watched monkeys playing in the trees and marveled at the huge butterflies and colorful birds. And then there were the baby turtles.

We watched mesmerized as palm-sized baby turtles gingerly made their way from a nest hidden at the edge of the Costa Rican rain forest across a desolate beach to the water’s edge on Christmas Eve. They reached the Pacific just as the sun was setting, and we cheered.

Seeing those tiny turtles would have been a stellar experience any time. But the fact that it was Christmas, that the locals thought all the turtles had already hatched, that we were in such an exotic locale, and, most important, that my family was together that night on that remote beach made the experience all the more special and memorable. Good thing, because none of us had a camera!

That was one time we really didn’t need one, though. Eight Christmases later, we still talk about those baby turtles.