Sherlock Holmes: major exhibit to open at Museum of London 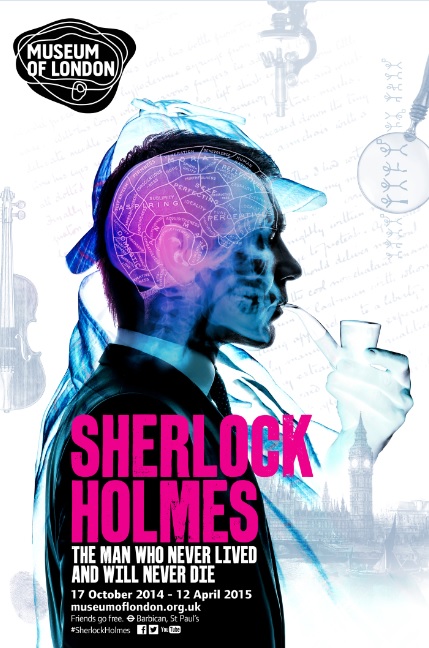 LONDON (Day Five) — He’s one of the most famous residents of London and a brilliant detective known all over the world — so famous he now has a museum exhibit devoted entirely to him.

No matter that he never lived. We’re talking about Sherlock Holmes, of course. The first major exhibit devoted to him is set to open October 17 at the Museum of London where Alex Werner, the head of the museum’s history collections, predicts it will help bring new visitors from around the world to this gem of a museum devoted to London’s history, from the Romans to the present. It proves an ideal introduction to London.

Teens, Werner believes, will be especially drawn to the exhibit because they are fans of the BBC series Sherlock and the American series Elementary.

The exhibit will have lots of objects culled from private collections and will draw people back to Sherlock’s London.   See the original pages from Edgar Allan Poe’s manuscript of The Murders in the Rue Morgue from 1841 that inspired Sir Arthur Conan Doyle. Retrace the literary beginnings of Sherlock Holmes including original drawings by Sidney Paget who illustrated the stories in The Strand magazine where they first were published. Paintings, drawings and artifacts from Victorian London will show how the era defined Holmes and his forward thinking detective skills—more than 500 artifacts complete with his famous magnifying glass, curved pipe, coat and deer stalker hat

Of course there is a lot more to this museum than Sherlock. There are children’s “activity trails” you can pick up for those as young as 7 and one for older kids.

Walk through a Victorian Street – check out the toy shop, explore the London of Shakespeare’s day see a remnant of a Roman Wall, the enormity of the London Fire of 1666, the London of the World War II Blitz, the Swinging Sixties and the London 2012 Cauldron, telling the story of the successful Olympic and Paralympic games.

When the museum opened in 1976, it was the first new London museum since WWII and this past year, has enjoyed record attendance of over a million. The galleries tell the story of London over hundreds of thousands of year — there’s even a piece of an ancient Roman wall visible outdoors.  The collections include 50,000 objects – everything from Roman bowls to tin toys to medieval pennies to a fireman’s helmet dating back to the era of the Great Fire of 1666 that destroyed virtually all of the buildings within the Old City wall.

Kids love time traveling back to 1900 along the Victorian Walk complete with a pub. barber, grocer and toy shop.

Ogle the spectacular gold Lord Mayor’s Coach dating back to the 18th Century and still used today. Wish we could take a ride!