Sitting under the star listening to ukulele music – it’s Disney 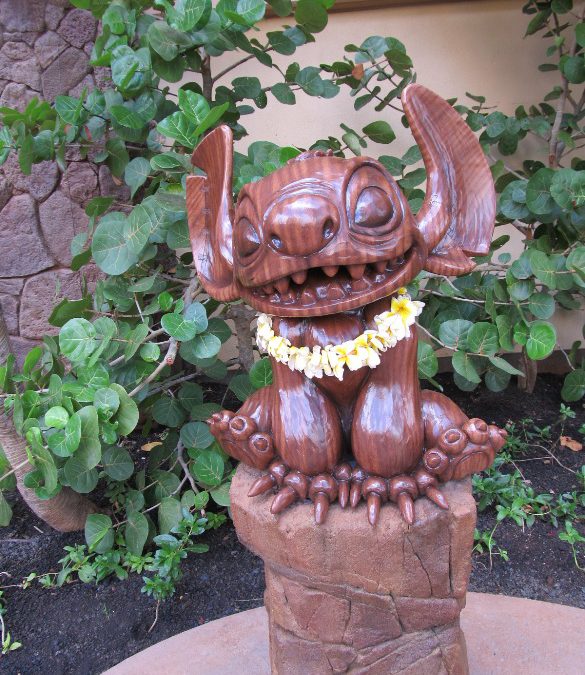 We’re sitting on woven mats under the stars listening to the best Ukulele playing I’ve ever heard. Rather than a huge luau with terrible food and hackneyed performances, Aulani, a Disney Resort & Spa on Oahu  has opted to celebrate Hawaiian culture with the Aulani Starlit Hui in which “Uncle” and an ensemble of dancers, musicians, singers and cultural practitioners entertain us under the stars.

That includes the Ukulele group is Heart & Soul whose lead player is Jody Kamisato (he was joined by David Ardo the night I was there. Fantastic!

“The lens is distinctly Hawaiian, not Polynesian,” explains Shelby Jiggets, who is responsible for the creation of the Aulani entertainment program. Guest will first join local artisans who teach crafts and Hawaiian games.  The 25-minute show follows, ending with an energetic dance party with the kids’ favorite Disney pals dressed in their Hawaiian finery of course.

There is also a traditional sunset gathering in the Makoloa garden to welcome the night with “Uncle” and his assistants offering a traditional (and original chant) to honor the natural world and the sure to be popular storytelling around the fire pit with tales about everything from the mischievous and magic-making Menehune who live in the forest and island ghosts—all complimentary. We want people to appreciate the richness of Hawaiian culture,” Jiggets explains. “It is a uniquely Hawaiian aesthetic here and that is what we chose as our focus and inspiration.”

That’s true whether it’s the hundreds of local animals and sea creatures carved in the rock (every time you walk through the property you’ll spot another one)s, the Menehune statues everywhere, the taro fields at the entrance to the resort and the volcano in the middle of the water park.

Djuan Rivers, the Vice President of Aulani who oversees the operation of the resort and is the liaison with the local community, hopes Disney’s presence here  will bring families to Hawaii for the first time. Only 20 per cent of family visitors now come to Oahu, he said, most opting for the outer islands. Disney Cruise Line encouraged families to try cruising, he said. The company is banking on this resort t 45 minutes outside of busy Waikiki to do the same for Oahu.

One selling point: Other Hawaiian resorts at the same price point–rooms start at $399 a night—don’t offer nearly as many complimentary experiences and activities.

Then there’s the friendly staff, who go out of their way to show a confused guest where they need to go. Certainly they are all glad for the jobs. The resort is estimated to create 2,400 full time jobs, about half right at the resort and Disney has donated more than $300,000 to the local community in cash and in-kind gifts to celebrate the opening.  The staff—or cast members as they are known-have been chosen in part on personality and their willingness to share their personal Hawaii stories with visitors.  They even get special training in Hawaiian culture toward that goal.

Early on, locals weren’t sure what to think, whether the resort would be like a theme park, said “Uncle” Kealoah Kelekolio, one of the resort’s three story tellers who also works at the Bishop Museum in Honolulu. “Now people feel really good. They realize (Disney) wants to embrace our culture.”

“They have their stories and they are talking about them,” added Rivers “It isn’t make believe here..it’s from the heart.”